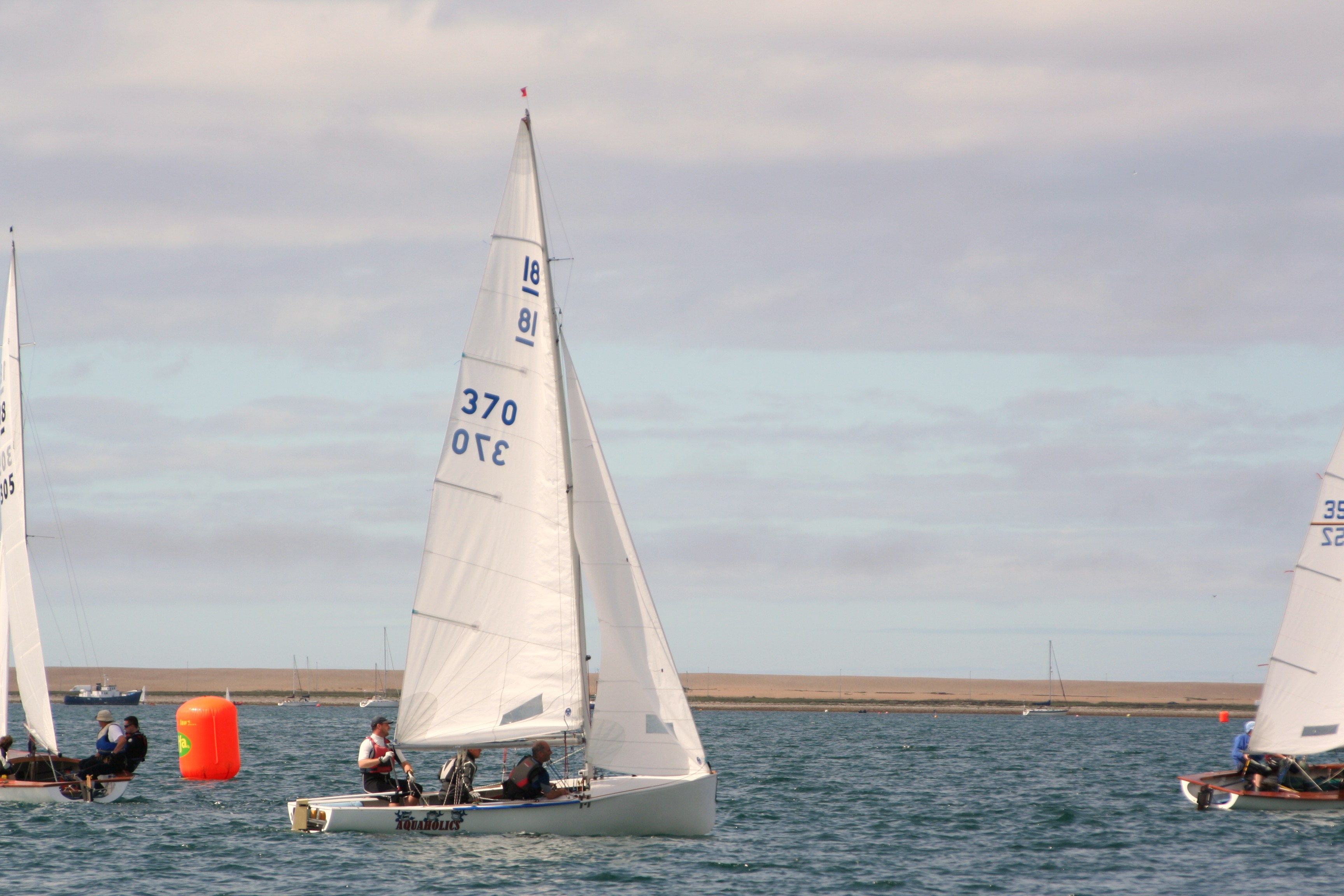 Aquaholics (370) sailed by Colin Chapman, Martin Almond and Morgan O’Sullivan of the Royal Cork YC won the 2009 National 18 Championship at Portland by only six points on a hotly competed final day. It was a fight to the finish with any one of four boats in with a chance of becoming overall champion in the last three races. Aquaholics took a seventh and two seconds to top the points table and won the Cork Harbour Trophy for the best overall result from 10 races. Second overall was Happy Days (358), sailed by Colin Barry, Dickie Mac and Dan O’Connell of Monkstown Bay SC, with 26 points from a second, third and a discarded OCS on the last day, when warm sunshine and a light to moderate north westerly breeze gave the best racing of the week. Jafiica (337), Phil Hermiston, Alistair Davis and Martin Cruden of the Royal Findhorn YC took third place with 28 points from two firsts and a seventh to win the Hurricane Cup, Yachting World Trophy and Medway Bowl. Ball n Chain (356), David O’Connell, Kevin Horan and Shane O’Connell, from Monkstown Bay SC, won the last race, with a discarded ninth and a fourth in the two preceding races, to score 29 points. They won the Overland Trophy and Whitford Cup.

Only one race was sailed on Thursday 6 August. It began well enough in a moderate to fresh north westerly and cloudy skies but before the finish the heavens opened with thunder, lightning and heavy hailstones and deposited a vast amount of water on the bedraggled competitors. Race Officer Simon Vines took pity on them and sent them ashore to dry out, with the promise of a second race in the afternoon after the storm had passed. When they were recalled to the start line later in the day the wind had gone and all thought of a second race had to be abandoned.
Phil Hermiston won all three races on Wednesday 5 August in Jafiica (337) crewed by Alistair Davis and Martin Cruden in a light west north westerly wind and warm sunshine. Leading boat on points at the end of the day was Aquaholics (370) sailed by Colin Chapman, Martin Arnold and Morgan O’Sullivan.

There was no racing on Tuesday 4 August because of near gale force winds.

David O’Connell was leading after the first three points races on Monday 3 August. Sailing Ball n Chain and crewed by Kevin Horan and Shane O’Connell, he had a stroke of luck when, thinking he had finished in fourth place in the first race, he discovered the three boats ahead of him had all been disqualified for being over the line at the start. A fifth, second and eighth in the following races, were good enough to keep him at the top of the points table at the end of the day.

The practice race was sailed in a brisk SSW wind in Portland Harbour on Sunday 2 August and was won by Don’t Worry (344) sailed by Stuart Urquhart, Richard Urquhart and Ross Young of the Royal Findhorn YC.

The Championship was organised by Tamesis Club in association with Portland Castle Sailing Club and with the support of the Weymouth and Portland National Sailing Academy, the venue for the sailing events at the 2012 Olympics.