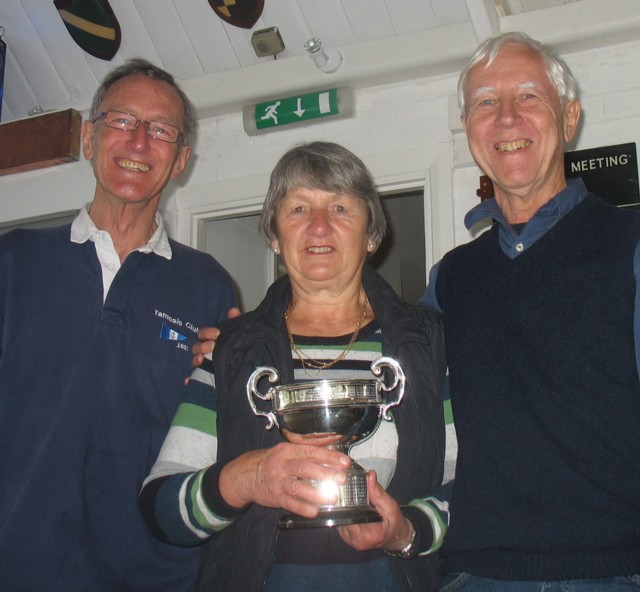 Berry Ritchie and Sue Harris won both the Porteous and Southcott Cups in a nine boat fleet at the Tamesis De May Series open meeting for Vintage Merlins on Saturday 12 April. The closely fought three race event came to an exciting climax in the third race, in which only seven boats competed.

Sailing Crescendo (607), Berry Ritchie and Sue Harris won the first race after completing six rounds in a light westerly wind, with Stuart and Ollie Jenkins of Hampton SC second in Luka (3560). The second race, sailed in a stronger westery wind, was won by Rob Wilder and his young daughter Milly in Flinkidink (1097). Unfortunately, they were unable to stay for the third race, so were placed third overall.

Race Officer Charles Fox set a popular Tamesis course with an upstream start to Canbury, a downstream reach to Lensbury and an east-west dogleg mid-stream near the clubhouse. In the final race Luka got away to a clean start, leaving Crescendo hemmed in by other boats, and the first time round Canbury the order was Luka in the lead with former Tamesis member Steve Bartlett, now Thames SC, crewed by Constantin Gerber, second in Wishbone (908). By the time they reached the dogleg Crescendo had pulled through to second and after closing on Luka in the approach to Canbury slowly sailed into the lead to finish just over two minutes ahead.

Commodore Stewart Colley presented the prizes and thanked Richard Mourant, Tamesis Merlin Class Captain, for organising the event and for calculating the handicap results. Alan Green, Rear Commodore Sailing, thanked Bill Brookbank for being the on-water umpire. The Club launch was operated by Doug Pope. Speaking on behalf of the visitors Stuart Jenkins thanked Nicky Chavasse and her helpers in the kitchen and bar, Rhiannon Jones and Jo Carstens for preparing lunch and tea.