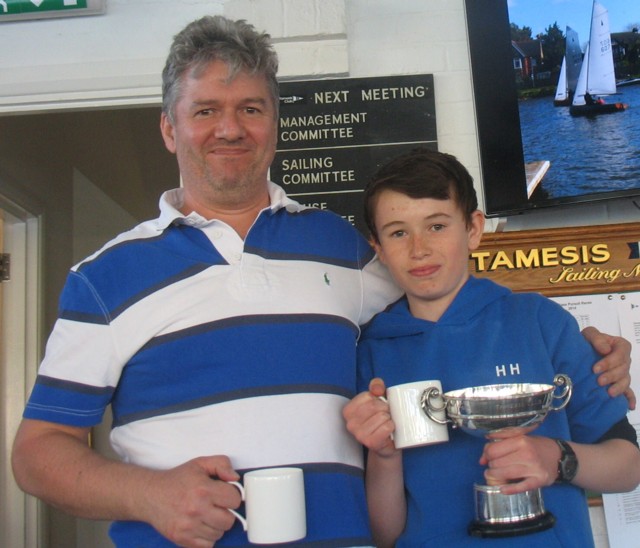 The Sondown Cup and Elizabeth Bowl were won by Richard Harris and his son Harry sailing Passing Cloud (1079) at the Tamesis Merlin Rocket Thames Series open meeting on Sunday 13 April. Seventeen boats from four clubs, including Thames SC, Wembley SC and Fishers’s Green, took part in the three race meeting, which was held in a light to moderate north westerly wind and warm sunshine over a course which took the contestants on a long down river beat to the northern end of Trowlock Island followed by an upstream run to a Canbury mark set just below Steven’s Eyot. Passing Cloud won all three races.

The fight for second place was, however, hotly contested and led to a protest following a collision in the final race, as a result of which Berry Ritchie and Sue Harris in Crescendo (607) moved up from third to second and Matthew Peregrine-Jones and Eddie Lowe in Masquerade (995) dropped to fourth overall. The upward adjustment of all other places led to a tie-break for fifth place.

Richard and Harry Harris won the first race by a clear margin of three minutes, with Charlie Morgan and Fiona Cotteril second in Lady Anne (1978), Rob and Helen Wilder third in Flinkidink (1097), Matthew Peregrine-Jones and Eddie Lowe fourth in Masquerade (995), and Berry Ritchie and Sue Harris fifth in Crescendo (607)

In the second race Flinkidink was second, Masquerade third, Crescendo fourth and Ken Duffell and Brian Corking fifth in Harry (3599).