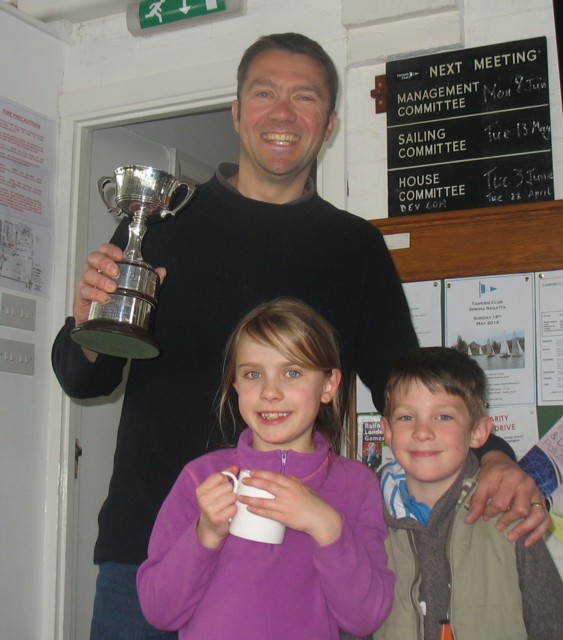 The Elizabeth Cup was won by Steven Greaves of Rickmansworth SC crewed by his children Madelaine and Arthur at the Tamesis open meeting for Fireflies on Sunday 27 April. Sailing Cumulus (186), they won both the first and second races in the three race event and did not compete in the final race, which was won by Mustard (2649) sailed by Alex Davey of the Royal Harwich YC, who won the Cup last year.

Skirmish (3615), sailed by Jamie and Angus McEwen, of Tamesis, was second overall, with a third and two seconds in the three races.

The races were sailed in a very fast running stream and a fickle wind, that varied in direction between south west and south east, and the best progress upriver was achieved by staying close to the Middlesex bank. Those competitors who were tempted out into the middle of the river by the occasional gust soon regretted their mistake as they were overtaken by boats tacking up the shore. Ten boats took part in the first race, but enthusiasm diminished thereafter and some lapped boats, struggling against ther stream, eagerly accepted a tow back from the Patrol Boat, which was manned by Tamesis Harbour Master Chris Pollard and Peter Finch. The incoming tide brought some flooding, leaving the pontoons below water, and while the struggling boats managed to avoid hitting them, their crews pleaded for a shortened course as they passed the starting box, manned by Race Officers Donald Forbes and Peter Johnson. Only five boats started the last race and only two finished.