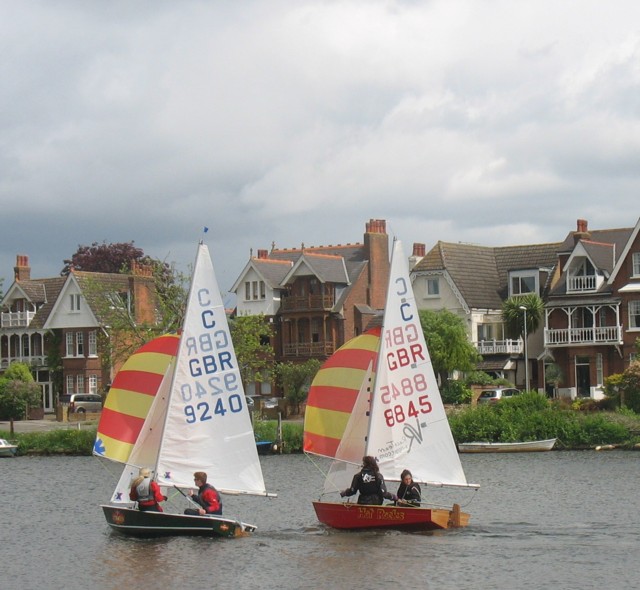 Megan Ferguson and Yasmin Spasci from Frensham Pond SC won the Munster Cup on a day of difficult weather at the Tamesis open meeting for Cadets on Saturday 10 May. Sailing Hot Rocks (8845), they outmanouvred fellow Frensham members Henry Marsh and Tess Watling in Nitro (9240) to win the first two races of the three race meeting and were able to discard their result in the final race, which was won by Nitro.

The weather, although not as wet and windy as forecast, provided some challenging sailing with a gusty light to fresh west south westerly wind, and occasional heavy rain showers between welcome periods of warm sunshine. There were some spectacular capsizes and Richard Harris, Tamesis Cadet Captain, who organised the event and operated one of the two patrol launches, was called on to rescue several overturned boats.

Race Officer John Harris sent the eight Cadets which competed in the first race on a long upriver course to a Canbury mark above Steven’s Eyot. The competitors were sheltered from the worst of the wind by the high trees on the Teddington bank of the river and it was only on the downstream leg of the course that they had to cope with the stronger gusts as the wind accelerated across the recreation ground and dinghy park. Two races, each of two rounds, of this course were sailed before lunch and a shorter course set in the afternoon provided better viewing for spectators as it included an east-west dogleg in the windiest section. Several boats hit the Club mark as they tried to round it and had to re-round it before beating upstream.

The prizes were presented by Tamesis Commodore Stewart Colley.