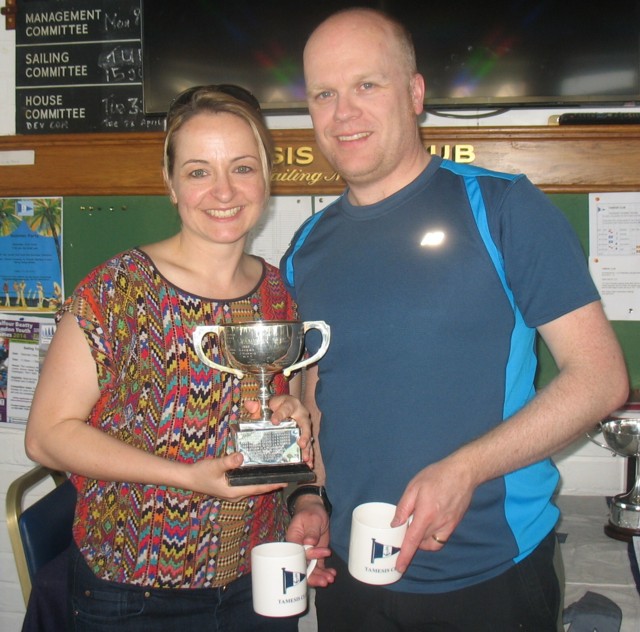 Almost 30 contestants enjoyed some highly competitive racing at the Tamesis Spring Regatta on Sunday 18. The three race event was sailed in warm sunshine and a light to moderate wind that kept shifting between south west and south, giving an upstream beat and a run down river on which spinnakers, although tricky to fly in the flukey wind, were used to advantage.

Commodore Stewart Colley, who was Race Officer, sent the fleet on a lengthy upriver course to a Canbury mark set cose to Hampton Wick Railway Bridge with the Lensbury mark just downstream of the southern end of Trowlock Island. Seven Merlin Rockets, seven Lasers, three National 18s and a solitary Albacore were given several rounds in the first two races before a much shorter course in view of the spectators in and outside the Clubhouse was set for the third race.

There was close competition in the Merlins between Rob and Helen Wilder in Flinkidink (1097) and Peter and Richard Mason in Bambusa (847), with Flinkidink winning the first race and Bambusa the second. The Wilders took overall victory with a clear win in the third race. The contest for third went to a protest following a collision between two boats in the final race. Dana Church and Tim Cole in Dynamo Humm (3411) finally took third place.

In the 18s, Doug Pope and Jose Ugarte took first place overall with two firsts in One over the Eight, National 18 (349).

After presenting the prizes, Commodore Stewart Colley thanked Brian Timbrell, the Sailing Secretary, for organising the event Nicky Chavasse and her helpers in the kitchen and bar for arranging lunch and tea, Rupert Livesey in the box, and Ken Thatcher and Peter Finch for operating the safety boat.