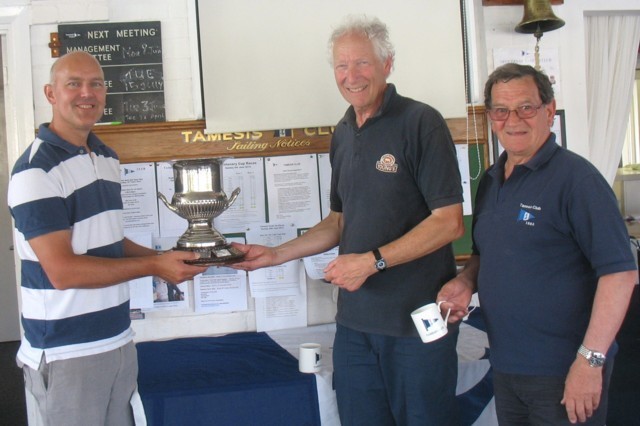 David Baker and Jim Green sailed Cobblers, Albacore 6813, to a closely challenged victory in the annual two-race class handicap pursuit for the Centenary Cup on Sunday 8 June. Both races were sailed in warm sunshine and a gentle south westerly wind that that gave some good racing. Thirty Tamesis members competed in the event, with 18 boats coming to the line in the morning race, which was won by Jon and Augusta Redding in Pikey, Merlin Rocket 3520. Unfortunaterly, they were unable to sail in the afternoon, and so did not qualify.

Cobblers had been fourth with Henry Defries, sailing Phew, Laser 178209, third in the morning race. However, Henry was also unable to sail in the afternoon. Donald Forbes in Greylag, Laser 18044, had two good results to gain third place overall. He beat the National 18, Antedote, sailed by Charles Fox and Chris Pollard, into fourth position by a tie break. Second place overall went to Peter and Richard Mason in Bambusa, Merlin Rocket 847, which was second in the afternoon and sufficiently well placed in the morning to ensure a top result.

It was pleasing to see four different classes in the top four positions, indicating that the handicaps worked well overall.

Race Officer Ian Burnett set a challenging course that took competitors on a three round circuit between two buoys set well upstream of Steven’s Eyot, with the Canbury mark not far short of Hampton Wick Railway Bridge. This was followed by a two round circuit between Albany and a Lensbury mark set a third of the way down Trowlock Island.

The Cup, given to the Club in 1985, its centenary year, by the late Louis Derham, Tamesis Commodore from 1985 to 1988, was presented to the winners by his son, Simon, who is himself a former winner of the Cup.

Ian Burnett was assisted in the starting box by Angela Caldara and in the safety boat, from which the finishes were announced, by Florian Krueger, Onursal Soyer, and Joanna Rand.