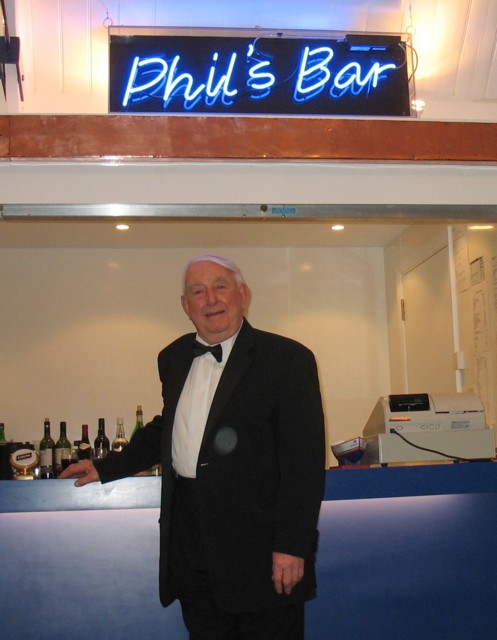 More than 100 old friends and colleagues attended the funeral of Phil England at Mortlake Crematorium and the reception afterwards at Tamesis Club on Friday 20 June. They were welcomed at the Crematorium Chapel by Phil’s sons Adrian and Anthony and daughter Georgina and had responded to their request to wear brightly coloured ties and clothes in memory of their father. The service, which was conducted by the Rev. Ernest Forward, began with the hymn “Lord of all hopefulness” and ended with William Blake’s “Jerusalem”, included moving tributes to their father by Adrian, Georgina and Anthony.

At the reception, Brian Southcott, who had joined Tamesis some 10 years before Phil, and his late wife, Jean, recalled that at that time the club had no working toilets, only Elsans. He and Phil were each given a weekly task to do before the members arrived for sailing. Brian drew the more pleasant job of trundling several tanks of fresh water from Carter’s Boathouse. Phil was made responsible emptying the Elsans from the ladies’ changing room which was then in a gypsy caravan on the lawn!

When Carter’s Boathouse and lands were put up for sale Phil agreed with BP, the eventual buyer, not to attend the auction, leaving BP as the sole purchaser at a cheap price. BP then installed running water and electricity to Tamesis as an extension of their own supply.

In those days the Tamesis buildings were on an island surrounded by a stream running from the backwater next to Ariel to the stream surrounding Trowlock Island. The land was also engulfed by a mass of willow trees which had to be felled to create a car park and new entrance. One old member, Dick Marshall, an ex-Burma Chindit, could fell a tree in the time it took 20 other members to do the same.

Phil’s next enthusiastic development was to replace the tumbledown men’s changing rooms and camp shedding along the river frontage. As chairman or the RYA’s Sailing and Racing Committee Brian was able to arrange for Phil to meet the Sports Council members to discuss funding for sailing clubs and Phil charmed them into funding new changing rooms and a boat shed, the original building of which had given birth to Uffa’s Spoon, presented by Uffa Fox, for the biggest gaffe of the year. Phil also persuaded the members of the Council that Tamesis, which had the strongest Cadet fleet in the country, needed a new boat shed in which to build and keep their boats, and they agreed to meet half the cost.

Phil then turned to re-designing the old clubhouse and the replacement of the old kitchen and bar. He founded the Wednesday Working Party to harness the skills of retired members in maintaining and repairing the club buildings, retiring for lunch at a local pub. After 12 gruelling weeks at various hospitals in May and June, Phil finally showed us what he was made of by going to just one more lunch before taking up his final mooring.

Brian concluded by reading an Ode to Phil before proposing a toast to the memory of the club’s much loved Captain.

Tamesis Commodore Stewart Colley thanked Brian for his moving address and all those who had helped to organize the reception.
Phil’s tremendous contributions to the rebuilding of the Clubhouse were also recognized by a decision to call the new bar after him. Phil’s Bar was officially opened on 15 February 2009.