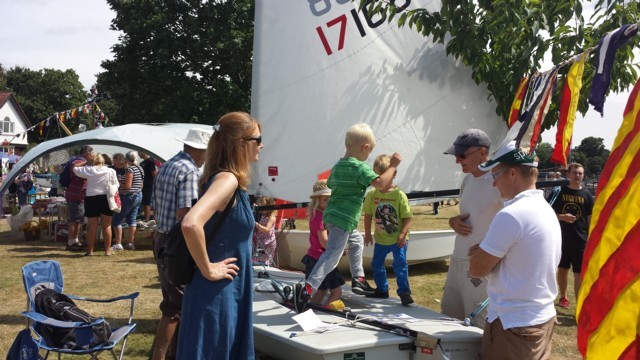 The Teddington River Festival was held on Teddington Lock Island and the Surrey bank of the Thames on Sunday 27 July. Commodore Stewarft Colley towed his Laser and one of the Club’s Mirrors down to the Lock behind the Club launch with the help of Vice Commodore Carolyne Vines, Offshore Group Captain Clive Mence, and Florian, David and Sara Krueger. They were met at the Lock by Adrian, Sally and Rosalind Warwick-Haller, Nicky Chavasse and Sue Harris. The Laser was hoisted up on to Lock Island and taken to an allocated slot at the lower end and the Mirror was rigged in the Lock and moved down next to the Laser with the assistance of Rosalind and several Sea Cadets. A number of people stopped for a chat and some went on to the Club for lunch and tea. Afterwards the two boats were towed back to Tamesis with the help of Peter Johnson and Paul Jamieson and waved off by Clive Mence who took some of the following pictures.