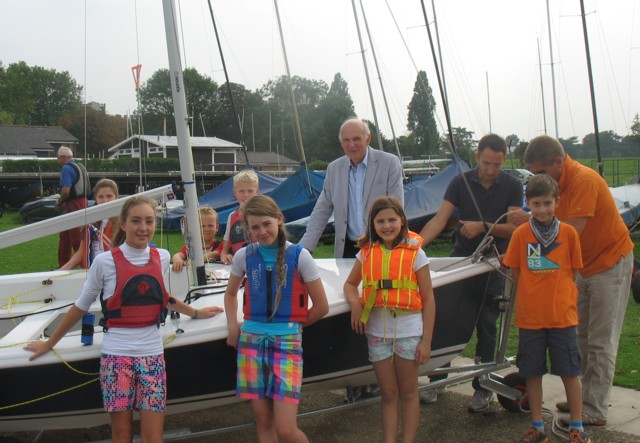 A new Wayfarer trainer sailing dinghy to be used ​to introduce​ ​newcomers to sailing, both adults and children, was officially launched at Tamesis Club on Saturday 6 September by the Rt Hon Vince Cable, Secretary of State for Business, Innovation and Skills, and MP for Twickenham. The name of the Wayfarer, funded by Sport England, is Midnight ,​​ chosen in a competition held by the Tamesis Cadet fleet ​. The winning entry was from Tabitha Forbes, who handed over a sealed envelop​e as Dr Cable prepared to pour a glass of champagne over the bow. The Minister was accompanied by his wife Rachel, an experienced sailor, who cut a celebration cake ​specially made​ with the Tamesis burgee in icing.

Afterwards, ​ Mrs Cable​ joined the Cadets for a sail in the new boat. Optimists and other club dinghies were also on the water to give visitors and members a sail.

Vince Cable said he was delighted to be present in the attractive riverside setting at Tamesis and in launching the new boat, to encourage the sport of sailing in which Great Britain has shown world leadership. In welcoming Dr Cable, Alan Green, Rear Commodore (Sailing) said the club, which sails throughout the year, was making every effort to increase participation and to welcome newcomers, and greatly appreciated backing from Sport England and also UK’s national sailing authority the RYA.

The Wayfarer, built by Hartley Boats of Derby, is almost 16′ long and is CE certified to sail with up to 6 crew members.

John Adams ​ ​ and the House Committee arranged tea on the lawn in the warm September sunshine with cakes and savory nibble ​s provided by Lesley Adams, Sara Jamieson and Susan Green and served by Zoe Adams with help from Susan Green and Paul Jamieson. John’s​ ​wife Lesley baked the cake and did the icing ​with the club insignia.