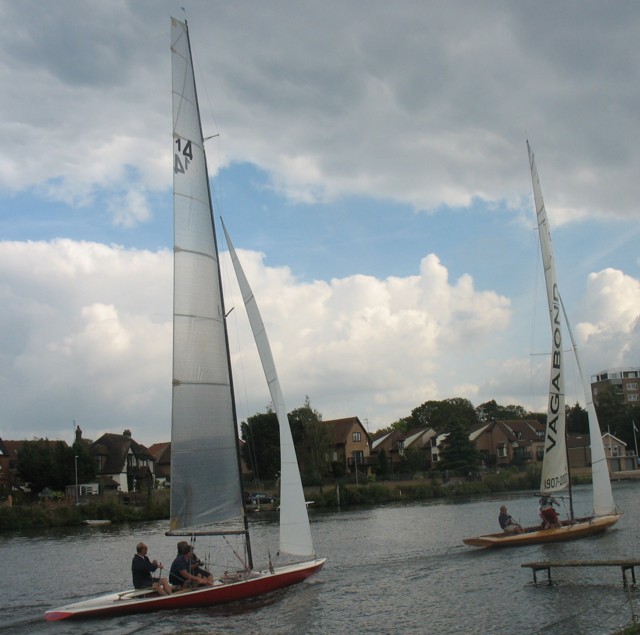 Twenty five boats helmed and crewed by 50 sailors took part in some keenly competitive racing at Tamesis Club’s Autumn Regatta on Sunday 14 September. The Thames A Raters were sent on a lengthy course to Lensbury which gave a beat from a downstream start followed by a reach and beat upriver to a Canbury buoy near Hampton Wick Bridge. The other classes had a shorter course. A moderate to fresh gusty easterly wind provided some exciting sailing, with several capsizes, and the result of the three races for the majestic A Raters had to be postponed pending the outcome of a protest hearing.

The Autumn Cup for Merlins (presented by Ken Duffell the Merlin Class Captain in 2005) was won by Richard Harris, with two firsts in Passing Cloud (1079), crewed by his son, Harry. The other first, counting the best two of three races, was scored by Rob Wilder and his young daughter Milly Chong-Wilder in Flinkidink (1097).

Ian Burnett won the National 18 Class in Zephyr (374), crewed by Angela Caldara.
Donald Forbes in Greylag (188044) fought off some strong competition in the Laser fleet from his grandson Nick Forbes in Storm (146120) and Henry Defries, who won the first of the three races in Phew (178209).

The Race Officer, Mervyn Allen, was assisted by Anne Bayne, and the Club launch was operated by Chris Starr and Sara Jamieson. Vice Commodore Carolyne Vines presented the prizes.

There were visiting boats from Thames and Upper Thames Sailing Clubs.