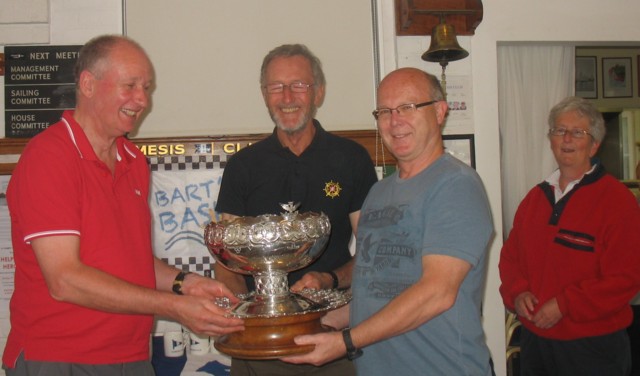 The last three of the six races for the Braganza Bowl, the most highly prized of the Thames A Raters’ trophies, were held in conjunction with the Bart’s Bash regatta at Tamesis on Sunday 21 September. Vagabond (13), sailed by Ben Palmer, Mark Laity and Patrick Raynor was the overall winner in a fleet of five Raters. They had won two of the three races on Saturday 20 September and two on Sunday. Second overall was Osprey (16), sailed by Paul Browning, Justin Dunn and Graham Bartholomew, who won the fourth and last races of this six race event. Only two boats competed in the final race.

Sunday’s racing took place in a gusty, fresh to strong north easterly wind, which, despite a day of welcome sunshine, was in sharp contrast to the light breezes of Saturday. Race Officer John Harris set a lengthy course X which stretched from a buoy opposite Canbury Gardens to a Lensbury mark near the downstream end of Trowlock Island. A shorter course within these confines was set for the remainder of the 29 boats which took part in the regatta to raise money in support of the charity set up in memory of Andrew “Bart” Simpson who was killed in an accident in San Francisco last year while training on an America’s Cup challenger. It was a Guinness World Record attempt supported by sailing clubs throughout the world to promote the largest sailing event in the world.

The prizes were presented by the Tamesis Commodore, Stewart Colley. The regatta was organised by Vice Commodore Carolyne Vines and Rear Commodore Sailing Alan Green. Chris Simons was the on the water judge.