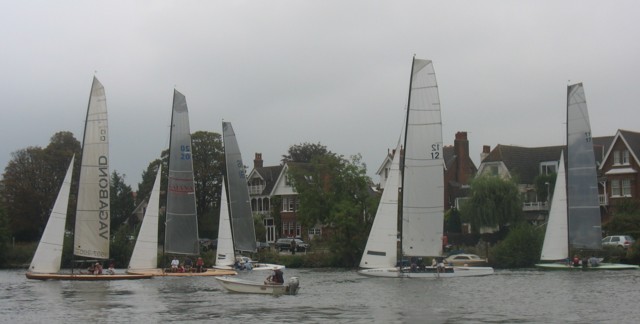 Jonathan Smith won the Yates Cup in Scamp (12) after a closely fought race with Vagabond (13) at Tamesis Club’s annual open meeting for Thames A Raters on Saturday 20 September. He was crewed by Matt Dean and Katy Benson. Vagabond, sailed by Ben Palmer, Mark Laity and Patrick Raynor, had won the first two races for the Braganza Bowl earlier in the day but was compelled to do a 720 penalty turn for a rule infringement early in the third race and was unable to recover in time to challenge Scamp again. Scamp won by a margin of almost two minutes.

The race was sailed in a light north easterly breeze, with occasional welcome gusts as slight showers of rain passed through. The five competing Raters were sent off on a downstream beat to a Lensbury buoy half way down Trowlock Island, followed by an upriver reach and run to a Canbury mark just short of Steven’s Eyot. The Race Officer was Peter Fryer.