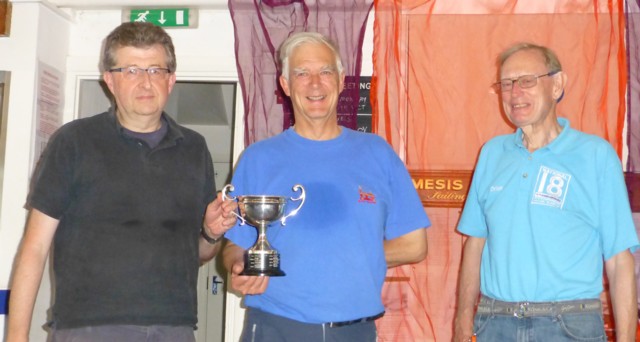 The National 18 Inland Championship on Saturday 27 September was saved from becoming a big drift by what one onlooker called a “homologous” breeze (ie having the same relative position throughout). His remark was unjustified, however, as the modest one to two knot wind which eventually arrived did shift in direction from SSW to SE during the day. Race Officer Matthew Peregrine-Jones wisely postponed the start of the first race for more than half an hour because of the lack of a breeze. Eventually enough wind arrived to make racing possible and the four competing boats were sent off on a very short course in front of the Clubhouse and dinghy park.

Chris Pollard and Geoff Malseed, sailing Antedote (348) worthily won both the Maddison Cup for on-the-water performance and the National 18 Cup for handicap performance after an RYA tie break. Zephyr (374), sailed by Ian Burnett and Anne Bayne, was second in both cups, and The Goose Drank Wine (369), sailed by Rob Cruickshank and Barney Smith, was third.

The first two races, sailed back to back, were won by Antedote after two 15 minute rounds, both by just over a minute. Zephyr finished second in the first race and won the third race, in which three rounds were completed in a marginally better breeze.