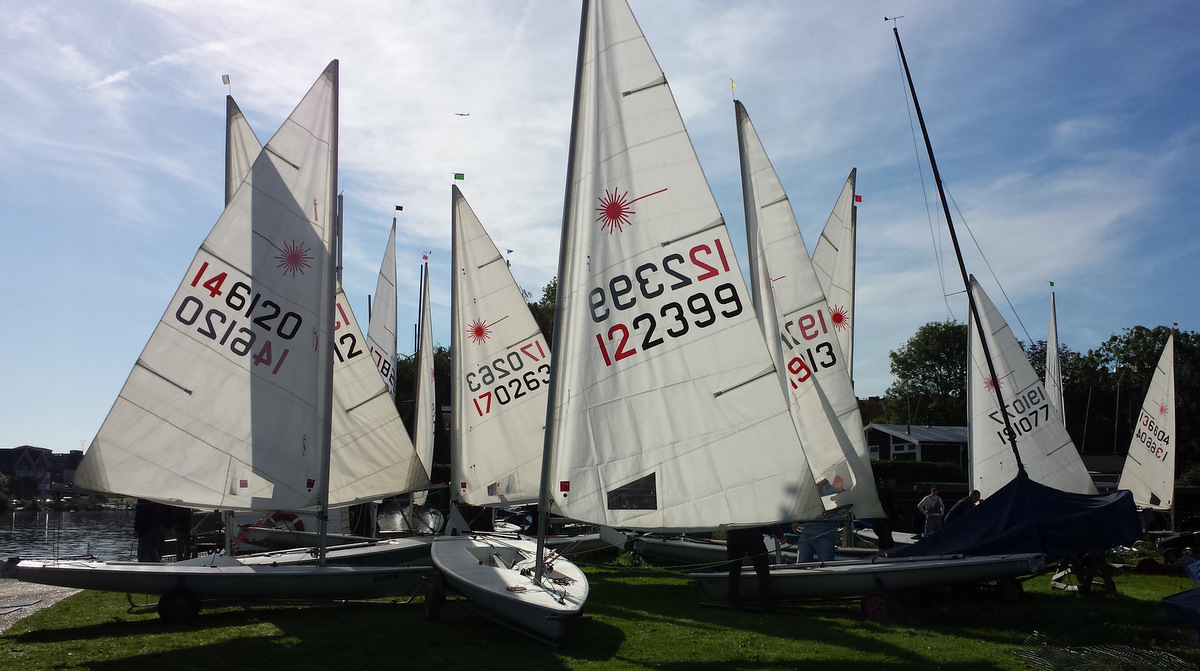 Well, it was sunny, it was warm, there was no stream, and we had 19 eager Laser sailors ready to take part in what was billed as the Tamesis Regatta of the year (by myself at least). The only problem, not much wind. 1 mph in fact, which isn’t a lot. Still the forecast was for it to pick up to at least 2mph by the afternoon, and with that in mind the OOD Peter Mason called the first race, on time, at 11am.

It was a straight forward up and down course in front of the club, with 4 laps and marks to port. There really was very little wind but somehow quite miraculously all four laps were completed in good time by the leading boats, who managed to lap some people more than once (I think including yours truly). Jon Redding won the race, with visitor Julia Hancock (who knows Tamesis well) second, and Steve Bartlett third.

After a long break for lunch – these Laser sailors need long lunches – it was time for the second race. But before we started we had a little get together with the ODD Peter who re-enforced a few pointers on Rule 42, which loves to make an appearance in light winds, apparently. Peter stated that the first warning was a 720 and the second was a disqualification. Everyone nodded, smiled, and got on with the second race, which perhaps unsurprisingly was much closer this time round.

Despite that the second race got off to a good start and with a little extra breeze the competition was close. Indeed there were moments where the box was frantically hitting the finish buzzer. Again the race was won by Jon, and with one discard allowed he was confirmed Barometer champion before you could say “anyone for a third race?” (and despite not having sailed a Laser for years). Second was Julia with Nick Forbes coming in a very impressive third (given his career as a top Laser sailor is in its early stages).

Nick continued his good form in to the last race coming in second behind our other visitor James Baxter, with Julia third.

So although the wind was pretty terrible everyone enjoyed the day and the turn out was fantastic. It was great to see visitors James and Julia, and of course big thanks to Peter who as OOD ran a very tight show. Lastly thanks to everyone who lent other members their boats for the day. The Laser Barometer remains a great event in the Tamesis calendar. Looking forward to over 20 boats next year.