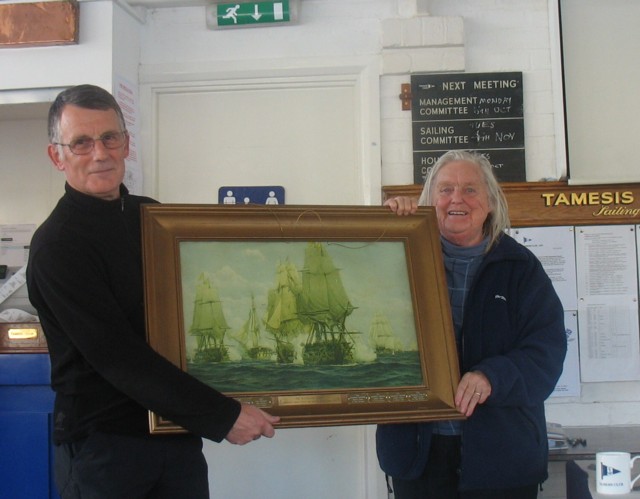 It blew hard before the battle and after the battle was over, but just as at Trafalgar in 1805, the battle for the Trafalgar Trophy at Tamesis on Sunday 19 October took place in much lighter winds. Most of the race was sailed in a light southerly force 3 which gave the 13 competitors a difficult up river beat into the sheltered water beyond Steven’s Eyot. There was enough stream to make the rounding on the Canbury mark a tricky business and the Lensbury buoy, set half way down Trowlock Island, proved equally difficult.

The six competing Lasers were the first away on this 91 minute class pursuit race, followed by an Albacore, four Merlins and two National 18s. Donald Forbes established an early lead in his Laser, Greylag (188044) but after the second round of this three round race he was facing some strong competition from David Baker and Jim Green in Cobblers, the Albacore (6813).

It was not long before the leading Merlins joined the battle and Peter and Richard Mason, the eventual winners, in Bambusa (847), were soon pressing the Lasers and Albacore hard. Several boats in each class were lapped by the leaders and one Laser gave up in sheer frustration with the awkwardness of the wind shifts and retired.

Peter Fryer, the Race Officer, was assisted by Daniel Gerber and the patrol boats were manned by Paul Jamieson, Simon Craig, Chris Pollard and Carolyne Vines.

For more picture see The Gallery.