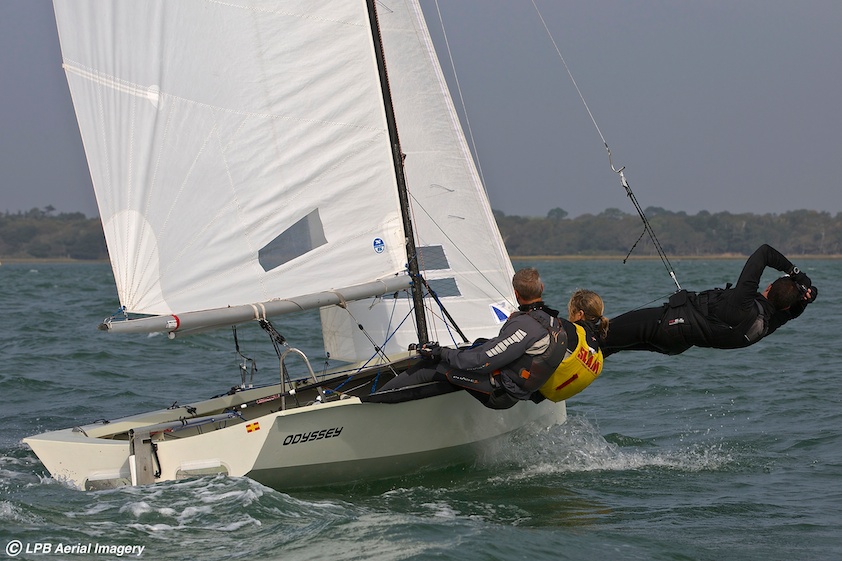 See below for the most recent press release on progress with the new National 18 design, which has just gone out to 1300 worldwide magazines and journalists, including 400 in the UK. We also have other related news further below.

The National 18 website has also had an update and is where this post originated. Do check it out at www.national18.com.

If you have any questions then do feel free to contact the team by using the contact form on the National 18 site.

Lymington, UK, 4 December 2014 – The National 18 Class has adopted the exciting new Phil Morrison designed hull and production has started with twelve hulls already on order for 2015

A prototype N18 named ‘Odyssey’ was launched in October 2013 and she has been trialled by upwards of 150 people as she has moved around England, Ireland, Scotland and Wales. There have been rave reviews. She is sleek, responsive and a joy to sail in all conditions. She is lighter, faster, safer and more comfortable to crew than current 18s. She is easy to launch and bring ashore and capsize recovery is no longer an issue.

The N18 remains the only 3 person centreboard dinghy, and the single trapeze allows a wide range of weight, experience and age to be competitive. She is spacious, and while three is the normal racing crew, two can manage or there is room for the whole family. The N18 Class is thriving and has a long history of competition and bonhomie.

At the AGM in Abersoch in July 2014 the Class voted overwhelmingly to accept the Morrison design as the new National 18. The Class is now delighted to announce the selection of White Formula of Brightlingsea, Essex, UK as our exclusive build partner.

Construction of the tooling for the class moulds has begun with completion expected by the end of 2014. As part of this deal the Class has worked with White Formula to agree attractive pricing for a range of options from bare hull to fully fitted complete boat ready to sail.

Current owners will be able to transfer spars and sails, thereby reducing cost. There is also an enormous range of styling options for anyone wishing to apply a splash of colour.

In the mean time the development team have been working with Phil Morrison to incorporate all the feedback following the Odyssey trials. She has proved absolutely invaluable in getting us to this point and will continue to serve us well. Our thanks again to all of the private contributors and The Boat Yard at Beer who helped deliver the prototype. She will be hitting the campaign trail this winter in the 2014/15 SailJuice series and the Class welcomes any existing or potential members interested in participating as helm or crew.

Moving on to 2015, the first production boat will be launched in early February with a display planned at the RYA Dinghy Show at Alexandra Palace over the weekend 28 Feb/1 Mar. White Formula aim to deliver all currently ordered boats by end of May 2015.

The Class is determined to remain inclusive of all the generations of N18s which started with the classic Uffa Ace of 1938, then the Proctor GRP hull of the 1970s and subsequent lighter, faster derivatives.

For further information about the National 18 Class please visit www.national18.com or email info@national18.com

About The National 18 Class

The National 18′ began in 1938 following a design competition organised by the then YRA (now RYA) and Yachting World magazine.The original idea was that of Frank Knowling of Whitstable YC (later to be known as the father of the class) for an 18-foot sailing dinghy, suitable for day sailing, yet fast enough to be of interest to racing sailors and at a reasonable cost. (The first rather hopeful restriction of the original class rules was “Price not to exceed £125 complete with spars, all equipment and designer’s fee but not including sails”). The plan was to produce an affordable national alternative to the many local one-designs of about this size to be found right round the coast of the British Isles. Many of these local estuary classes survive today, for example the Mermaid in Dublin, Thames Estuary OD, Chichester Harbour 18 etc.The well-known designer Uffa Fox won the competition (over the Laurent Giles submitted version) with his ‘Ace’ design for a clinker-built wooden boat. National 18′ number 1, ‘Hurricane’, was owned by Stanley Beale and sailed at Whitstable, with No.2 ‘Gust’ and No.3 Foam”.Initial enthusiasm was held back by the effects of World War II but a good deal of 18′ building got underway soon afterwards, when mahogany was again available for boat-building and the class became active especially in the Thames Estuary area. By 1950, fleets had appeared at clubs dotted all around the British Isles and Ireland, the Class Association having been formed in 1947.Although most boats were built to the ‘Ace’ design, the class had always been ‘restricted’ rather than ‘one-design’ and boats with a reduced number of wider planks were built when glued plywood construction was adopted and even one moulded carvel boat was built (252 ‘Sabon’).
Several of the wooden 18’s, now called ‘Classics’ are still in commission, and regularly race, principally at Bosham SC. They include No15 Tinkerbell, built in 1938 and still very competitive.

With the advent of GRP and the rising costs of hard woods, the Class asked Ian Proctor in the late ’60’s to design a fibreglass hull that would not outclass the existing boats. In this he was successful and it was some time before a Proctor hull won the championships. The first new Proctor, ‘Genivieve’ was exhibited at the Crystal Palace Dinghy Show of 1970 when a bare hull cost £153. Since then the Class has progressively reduced minimum hull and centreboard weight, and introduced a single trapeze. Also a restriction which requires all new hulls to come from the class mould so they are in effect one-design. Rigs have been optimised and more recently carbon spars introduced.

These changes produced a boat known in the Class as an ‘Ultimate’ which is fast and exciting to sail and which has provided close and competitive racing for fifteen or so years, both locally and at the annual National Championships. The Royal Cork Yacht Club has the largest fleet.

The Morrison prototype was financed by supporters of the Class and built at The Boatyard at Bere in 2013. Named ‘Odyssey’ and trialled extensively, she ticks all the boxes, is a pleasure to sail and has proved a great success. This development will undoubtedly give the Class a new lease of life, and production of new boats is already under way at White Formula in Brightlingsea.

White Formula UK is one of the UK’s leading producers of Hi-Tech Fibre Glass, Kevlar and Carbon mouldings. They have over 40 years experience in moulding composite materials. Their mouldings have reached the depths of the oceans on military submarines and the limits of the skies on British made Helicopters.

The company has an extensive knowledge of the marine sector. It has an entire division dedicated to Boat Building, Research and Development, Modifications and Refurbishing.

White Formula manufacture boats on behalf of many well known companies in the UK. They also sell complete packages, some of which have been designed and developed by their in-house marine team. These classes include the Challenger, Brightlingsea One Design, SB20, SL16, SL5.2, Sprint 15, Dart 18, Spitfire, Shadow, Shockwave, Alto, Breeze 6.0, Vortex, Blaze, ISO and Buzz.

The class strives to be inclusive in providing heathy competition for all generations of 18s through handicaps and separate starts. Thus though the major trophies at National Championships are awarded in the Ultimate class, there are trophies also for the Pen-ultimates (heavy GRP) and the Classics.

In 2012 the class mould was declared unservicable, and there was much debate about what to do next. This culminated in a request to Phil Morrison to design a hull that was sleeker, lighter, faster and safer, and in so far as reasonably possible within the existing measurement restrictions.