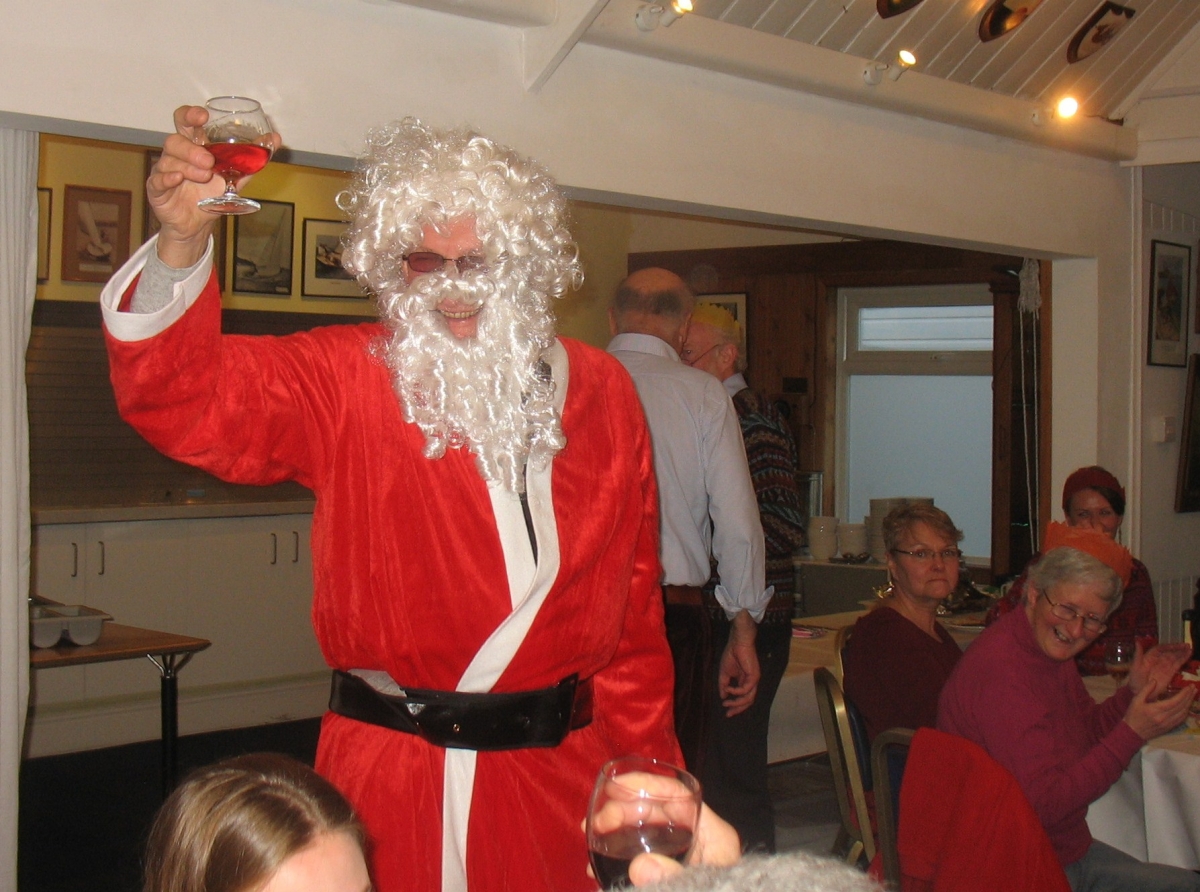 Nobody told Santa that the Tamesis Clubhouse doesn’t have a chimney. So the 95 members who attended this year’s Christmas Lunch on 14 December were somewhat foxed by the sight of a dishevelled Father Christmas, carrying a sack of presents, who arrived just as Brian Southcott was concluding the carol singing. The singers were in the midst of “On the first day of Christmas” and had just reached the words “and a partridge in a pear tree” for the twelfth time when Santa breezed in. He was clearly confused, as the picture shows, because he thought he had heard “a parsnip in a pear tree”. Buy one, get one free!

The lunch is usually preceded by the annual Christmas Pudding race but this year the contestants were given the choice of the traditional pudding prizes or boxes of chocolates. Even Santa got one and he didn’t even arrive by water. Berry Ritchie and Sue Harris won the Merlins in Crescendo (607) “by miles”, Henry Defries in Phew (178209 ) just beat Marcus Chavasse in the Lasers, and Doug Pope and Jose Ugarte were the first National 18, sailing One over the Eight (349).

Commodore Stewart Colley presented the prizes and then opened the proceedings with an appropriate grace thanking all those who dedicate their lives to helping those in peril on the sea.

Thanks were given to the House Committee for organizing the event and those members who generously gave up their time to prepare the room (tree by Bonnie Green, table laying and decorations by Bonnie and Jim Green, Adrian and Sally Warwick-Haller, Lesley Adams and Zoe Jeffra-Adams, Colin and Margaret Stokes, Chris Pollard, Stewart Colley, Carolyne Vines and Peter Johnson) and prepare the food under the watchful eye of Steve Katz (Lesley Adams, Nicky Johnson, Nicky Chavasse, Sue Katz, Sue Harris, Sara and Paul Jamieson. Tasty starters and sauces were prepared by Pauline Leach, Debbie Baker, Marie Simmonds and Sara Jamieson.

The magnificent meal of turkey, ham, sausages, vegetables, Christmas pudding with brandy and other sauces, cheeses and biscuits, and a tasty variety of starters, masterminded by Steve Katz, was cooked and presented on the day by Anna and Laura together with the Tamesis crew of Karina, Milly, Ami with Tom and Rhi on the bar and helping out where necessary. Wielding their carving knives with a flourish were Paul Jamieson, Marcus Chavasse, Pater Johnson and Rupert Fletcher with Rosalind Warwick-Haller helping to distribute the food to the starving hordes. Thanks, reinforced by a some liquid refreshment were also given to Nicky Chavasse, David Baker and Steve Katz for their immense contribution to the Tamesis social life throughout the year, and to Santa and his reindeer!

After a spirited rendition of favourite carols, led by Brian Southcott, Santa presented gifts to most of the people who had helped to organize the event and to the Cadets who joined in.

Replete and cheerfully looking forward to Christmas the happy crowd slowly dispersed to leave the club house quiet and still in the night awaiting the next event.