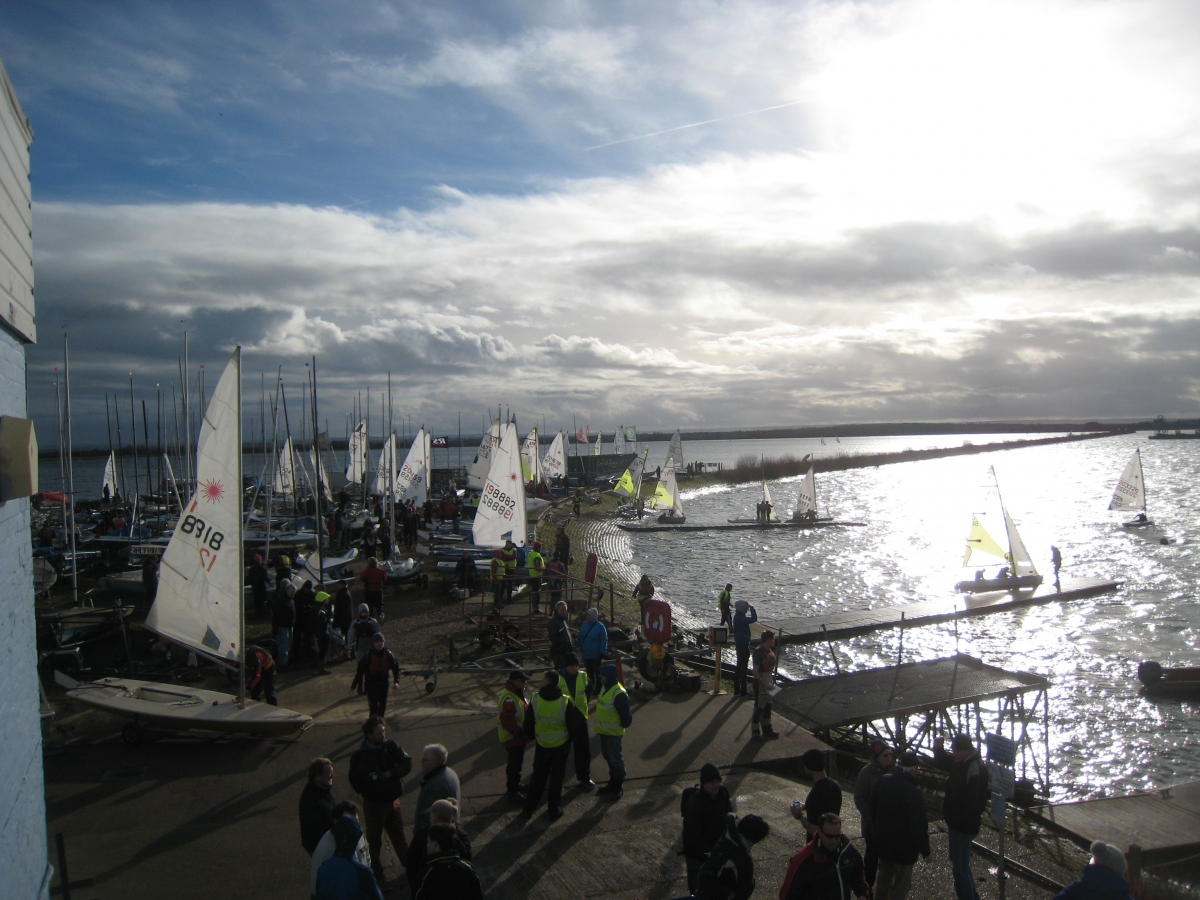 The gales of the night before saw no real sign of abating with wind speed on the raised reservoir blowing constantly above 20 knots and frequently gusting over 40 knots. Usually the hunting ground of International 14’s and Foiling Moths, the Bloody Mary saw neither of these as out of 235 entrants only 69 completed the course. Very windy, very choppy, and as a result pretty cold.

In the boat was me on wire, Ollie Houseman middle, and Fred Cudmore at the helm. We launched on the far side of the Queen Mary Reservoir spit and had time to try out a few points of sail before heading to the start on the other side. The wind, to be conservative, was hectic.

We started at 47 minutes past the start time (which had already been postponed to allow the wind to die down a little), straight in to a beat, and then just 1 minute in a huge gust turned up and knocked us over. Great start! Apart from getting completely soaked early on, and a little loss of time, it wasn’t a problem as two on the centreboard brought the boat up relatively quickly with Ollie being scooped up inside, he grabbed the helm and once all three were inside off we went again.

The sailing was fast with a lot of planning. When reaching 5 or more feet of the hull from the bow must have been held out of the water as the three of us were sat back as far back as possible. Certainly the fastest I’ve ever been in a dinghy and very exciting. Although quick it all felt quite steady and secure.

For the second half hour the wind died down a little so we started to plan the use of the spinnaker for some of the longer legs. However, as soon as an hour had passed the wind ramped up again and sent us speeding on a reach to a gybing mark. Gusts were back up to 40 so we chose to double tack only for a bad gust to hit us again and send us over, again. To add to the melee the top batten had also popped out and the mainsail window was split in two. We were also pretty soaked and cold by now and shivers were kicking in quite badly, so we decided to call it a day and joined the procession of other boats sailing back to the clubhouse, passing on the way a collection of capsized boats some with crews sat on their upturned hulls waiting for the rescue boats. One last go at a fast reach and we were back having hot showers and drinking coffee.

Very exciting event with fairly extreme wind, but of course never enough for the Bloody Mary organisers to call it off. A quite hairy outing at times at times, but ignoring the cold it all felt pretty steady and comfortable despite the two capsizes.

2 thoughts on “Odyssey, 40knot gusts, and a Bloody Mary”