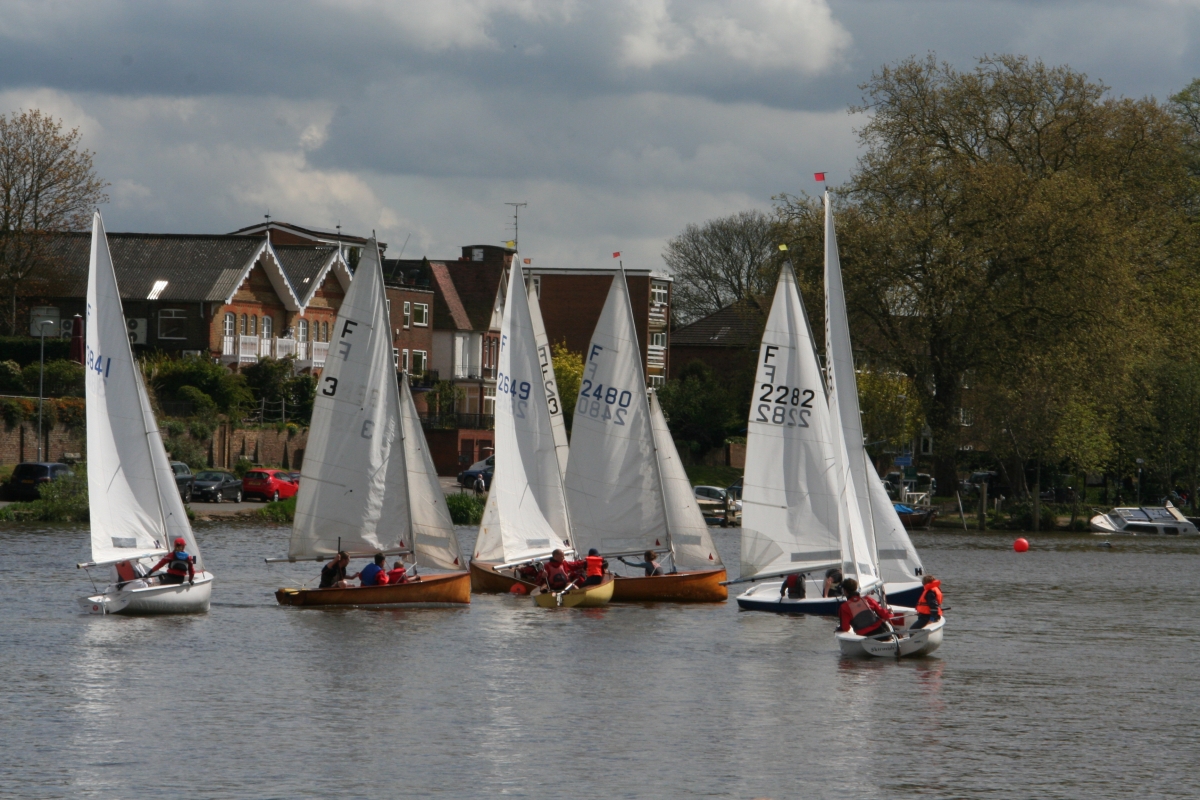 Seven boats and numerous children gathered at Tamesis Club on Saturday 25th April for the Junior Cup, an event for children crewed by grown-ups. The forecast hailstorms never materialised and instead the competitors and many spectators were treated to sunshine and a good breeze.
In the first race, Finn Morris (crewed by his mum Amy) took an early lead which he never relinquished. Behind him Angus McEwen (with dad Jamie) showed good speed after a slightly late start, picking his way through the fleet to finish second. “Hot” on his heels was Mustard, sailed by Thomas Davey and Arthur Greaves, with Alex Davey pulling the odd rope, followed closely by newcomers Ana and Alec Powell. Behind them were two shiny varnished boats with a horde of Dingwalls on board – Luca, Jack and Nicholas, Ben Daisy and Joe. Next across the line (and sailing very stylishly) was Polly Mason, crewed by her dad Will.
The second race was won by the Ben/Daisy/Joe team, chased by Thomas and Arthur and then Ana. Finn took 4th place, just overtaking William McEwen (who had swapped with his brother Angus) at the finish. Matthew Mason, another family substitution, was behind them, along with Luca/Jack/Nicholas.
There was all to play for in the final race, in which excitingly the Fireflies shared a course with a large contingent of Tamesis juniors in Toppers, Mirrors and Oppies. Both fleets seemed to survive more or less unscathed! Ana sailed beautifully to take line honours, leaving her tied on points overall with Finn who took third in that race. Thomas and Arthur were 5th so Ana won overall on countback.
Many thanks to Tamesis Club for once again organising a wonderful event. In traditional Tamesis style the sailing was followed by picnic tea and cakes on the lawn – all very idyllic!
Overall results:
1st Ana Powell 8 points
2nd Finn Morris 8 points
3rd Thomas Davey & Arthur Greaves 10 points
4th Angus & William McEwen 13 points
5th Luca, Jack and Nicholas 15 points
6th (and winners of the Most Stylish Sailing prize) Polly & Matthew Mason and Maddie Greaves 21 points
Crewing prize:
Ben, Daisy and Jo
Cheering competition:
1st= Ben McEwen, Anna Morris
3rd Ella Simmonds
Bravest sailors:
Stella Davey and Zoe Mason
Report Jamie McEwan
Photos Carolyne Vines