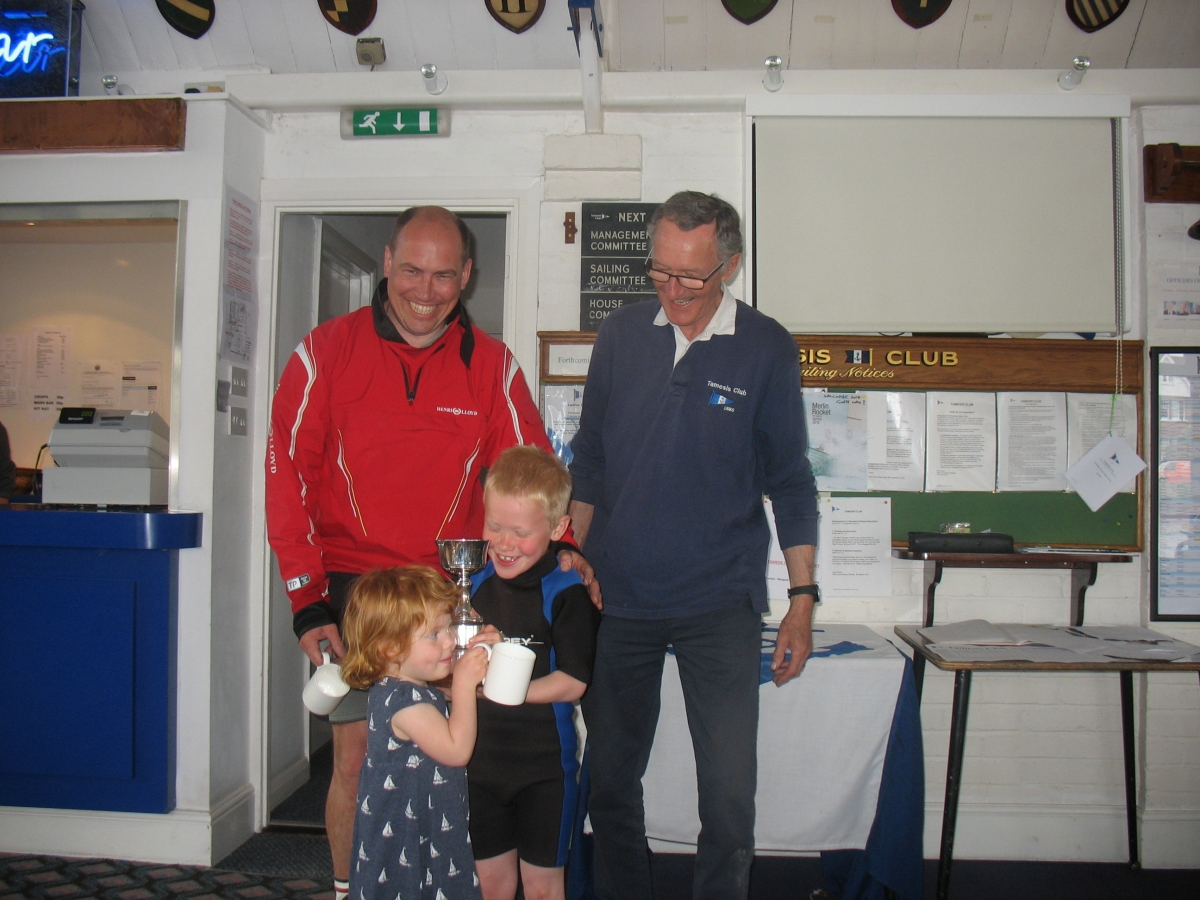 Alex Davey won the Elizabeth Cup for the third time at the Tamesis open meeting for Fireflies on Sunday 26 April.  Sailing Mustard (2649), crewed by his son Thomas, Davey, from the Royal Harwich YC, beat eight other Fireflies over a lengthy course in a light NE wind which gave a downstream beat and an upstream reach and run.  The cup was awarded to the boat achieving the best results in two of the three races. With entries from seven different clubs and a steady north wind the competition for the Elizabeth Cup for Fireflies was always going to be good.  And it was never tighter than on the start line.  In a medium wind with a short windward leg there were boats recalled in all three races. Steering clear of trouble Alex and Thomas Davey in Mustard showed that they were indeed hot stuff on the windward legs taking a strong lead and well able to hold their own on the runs.  Taking first place, they were followed by Skirmish sailed by Jamie and Angus McEwen. Race two saw Skirmish with an early lead but with the Mustard team tucked in on the Middlesex bank for the run emerging ahead at the second mark.  Skirmish was also being pressed by Grendel sailed by Ed and Sophie Smith and The Walrus sailed by Will Mason and Polly Matthew.  The Davey family were again in front at the finish, with the McEwens second and the Smiths third. Race three saw another strong battle among the same leaders and while Mustard was again the winner Grendel snatched a well deserved second place with Skirmish third. Results:  1 Mustard (2649) Alex & Thomas Davey, Royal Harwich YC;  2 Skirmish (3615) Jamie & Angus McEwen, Oxford and Cambridge Sailing Society;  3 Grendel (2803) Ed & Sophie Smith, Papercourt SC. The event was organised by Sue Harris, Tamesis Firefly Class Captain, and Stewart Colley, Tamesis Commodore, presented the prizes. Donald Forbes and Peter Johnson were the race officers and the patrol boat was operated by Chris Pollard and Peter Finch.

Alex Davey in the lead in the first race.