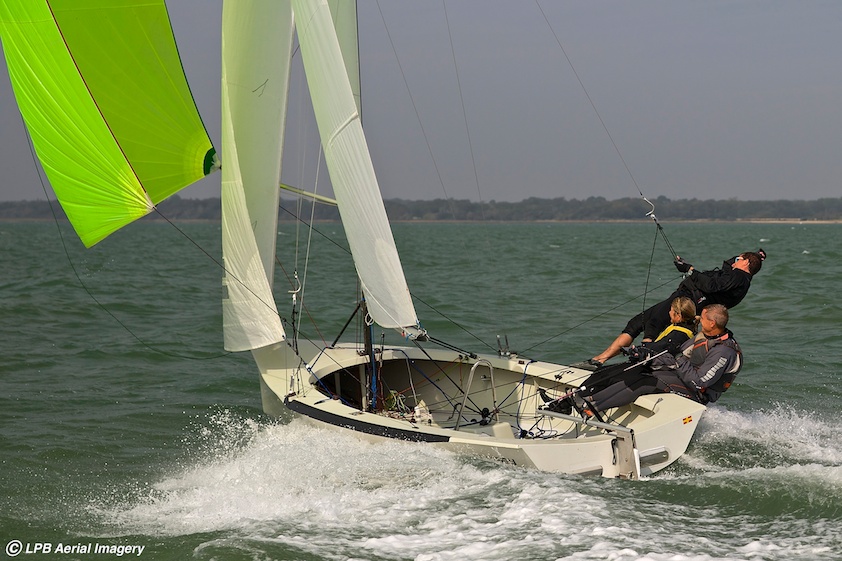 The weekend of 13th & 14th June is a very exciting one for the Tamesis National Eighteens.

On Saturday 13th June the National Eighteens are sailing for the 1832 Queen Adelaide Cup (handicap) and the 1937 Tamesis Anchor trophy (on-the-water). Always exciting, this club event is especially exciting this year because it is:
• the first ‘Battle of the Ultras’ for a trophy ever anywhere. Odyssey, 400, sailed by Peter Adams, will come head to head with Hurricane, 401, sailed by Ollie Houseman, for the first time, and
• it is also the first ‘Battle of the Ultras and the Ultimates’: among others Heat Wave, 343, Zephyr, 374, and Rhapsody, 375, will be battling to try and make sure that the Ultras don’t have it all their own way. On their day, the Penultimates could also enter into this particular ‘Battle’ and win (they last won a major Tamesis trophy on-the-water about six years ago).

The running order for the Saturday is two races starting at 11 a.m. and 12 noon, a break for lunch at about 1 p.m. and then have the third race start at 2 p.m. Come down and see the action. You can also see typically 20 juniors sail training the afternoon.

Indeed there are a couple of opportunities for you to join in the Saturday racing as there are some Eighteens available on loan by their kind owners.  Just call Ian Burnett (07768 697362 or 01372 363020).  As this is a club event, there is no entrance fee.

On the catering front, to be individually paid for, the plan is:
• Bacon butties for the troops to ‘carb up’ before the first race.
• Sandwiches or a ploughman’s at the planned 1 p.m. lunchtime (pretty much as we did at last September’s UK Inland Championship), with Phil’s Bar open.
• Simple tea and cake afterwards, probably at about 3.30. p.m.

On Sunday 14th June, a good number of Eighteens will racing in the morning Sunday Points Race. So others in the club will be able to see what a decent size Penultimate, Ultimate and Ultra Eighteen fleet can look like. Then at 2 p.m. we will be having a Tamesis Odyssey Re-launch. The idea was that all of the ‘Fab Fifteen’ Odyssey contributors would be there to have their picture taken with Odyssey. Unfortunately only twelve of the ‘Fifteen’ can make it but we will still have a picture. It is envisaged that the Queen Adelaide Cup & Tamesis Anchor Trophy will also be presented after the Re-launch photo.

After the picture, any of ‘the twelve’ who wish will have a go in Odyssey as can, afterwards, any other club members who would like a ‘spin’ in an Ultra. Hurricane might well also be available for these ‘Ultra’ fun sales.

All told, it should be a great weekend.