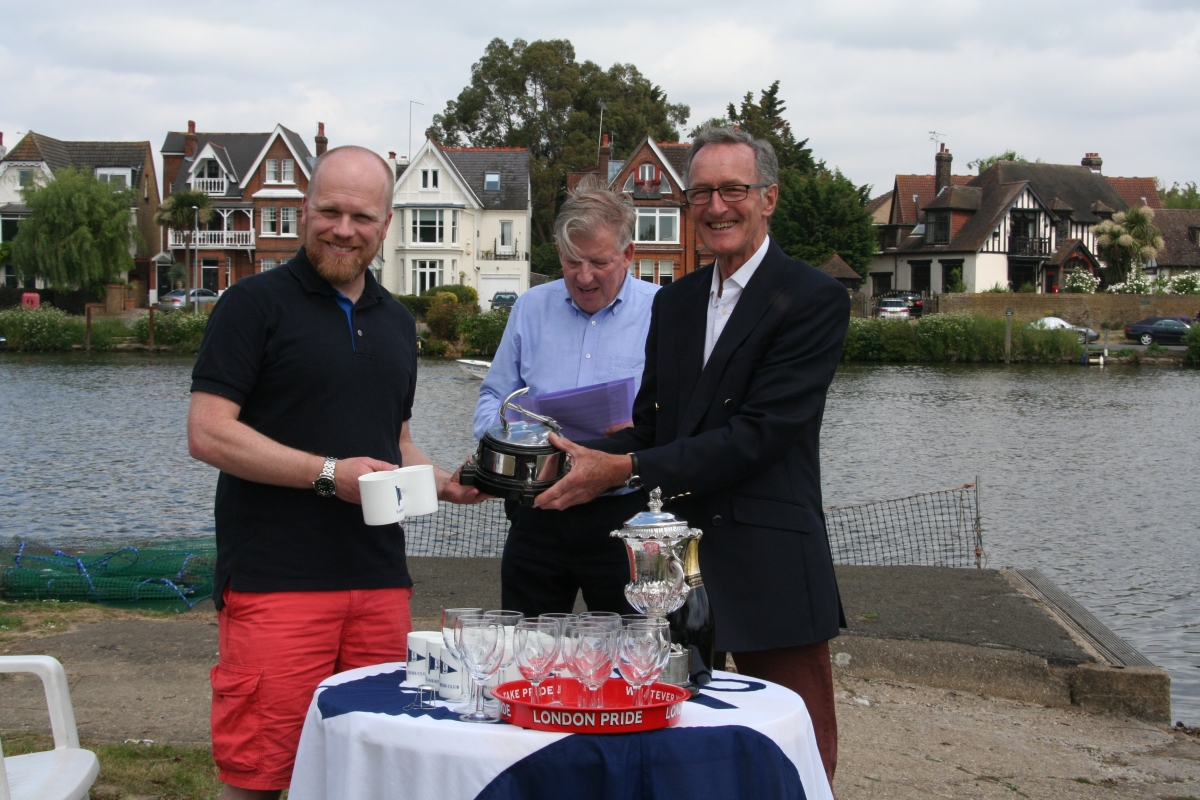 Rob Wilder and Tom McLaughlin out-sailed seven other National 18s to win both the Tamesis Anchor and Queen Adelaide Cup at Tamesis Club on Saturday 13 June.
They beat both Odyssey and Hurricane, the new Phil Morrison designed 18, which had been brought to Teddington especially for this annual three-race event.
Sailing Heatwave (343), a conventional Ultimate design, they took the first race by a margin of three minutes after three rounds of the course, the next by only 10 seconds after five rounds, and the third by 16 seconds after six rounds.
Hurricane (401), sailed by Ollie Houseman and Kaan Yargici, was third in the first race, and second in both the middle and last race, in which Ollie was crewed by Brian Corking.
Jeremy and David Vines, sailing Rhapsody (375), another conventional Ultimate, were second in the first race and third in the middle and last races.
Race Officer Ken Duffell sent the contestants off on an upstream beat to a Canbury buoy just below Steven’s Eyot followed by a reach and beat to a Lensbury mark, with an east-west dogleg opposite the clubhouse. Most of the racing took place in a light westerly wind, and cold overcast skies, but there were a few welcome beams of warm sunshine towards the end of the last race.
Results: Tamesis Anchor (on the water finish) 1 Heatwave (343) Rob Wilder & Tom McLaughlin, 2 Rhapsody (375) Jeremy Vines & David Vines, 3 Hurricane (401) Ollie Houseman & Kaan Yargici/Brian Corking.
Queen Adelaide Cup (after the application of handicaps) 1 Heatwave (343), Rob Wilder & Tom McLaughlin, 2 Antedote (348) Chris Pollard & Peter Bide, 3 Rhapsody (375) Jeremy Vines & David Vines, 4 Zephyr (374) Ian Burnett & Angela Caldara.
The Red Arrows did a low level fly past in honour of the Ultras’ arrival at Tamesis (and the Queen’s Trooping of the Colour a bit further down the Thames).
Both Trophies were presented on Sunday 14 June at the official naming ceremony of Odyssey by the Tamesis Commodore, Stewart Colley.