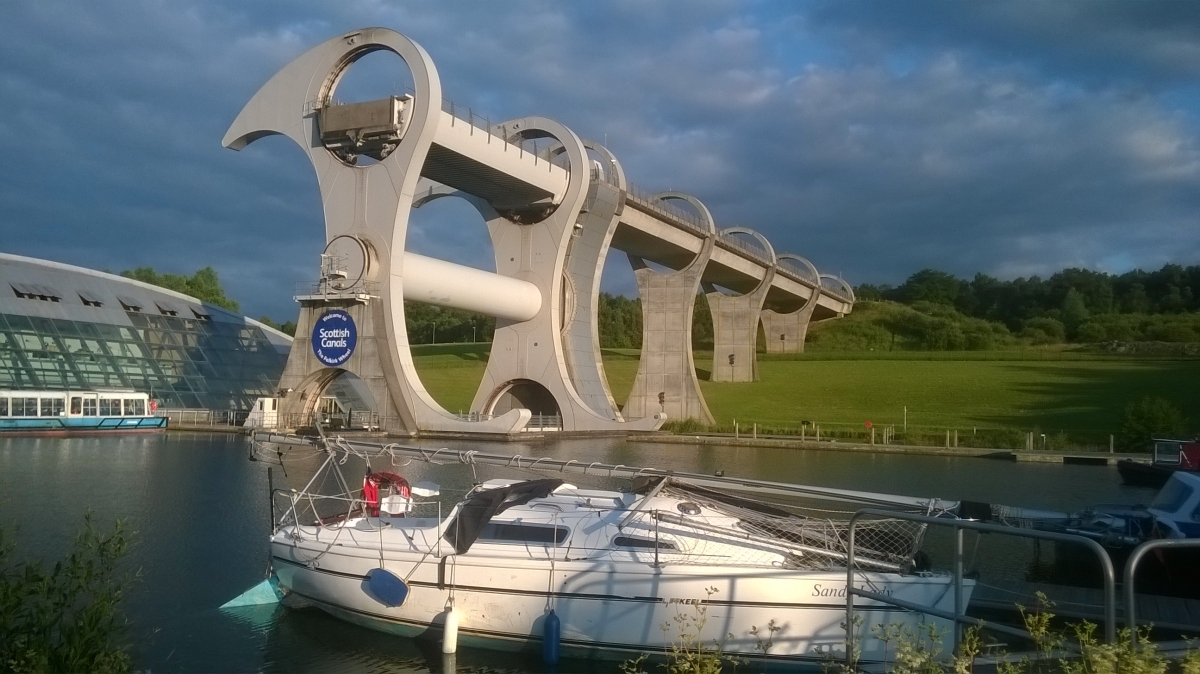 Jim Hamilton, a member of the Tamesis Laser fleet, is sailing around Britain in his Parker 23, Sandy Lady. He set off from his home port of Bucklers Hard on Sunday 10 May, arriving at Gosport later that night. He sailed on to Brighton the following day “the longest single sail my boat has done” after which his crew, Ted, had to go home, and then sailed on to Eastbourne crewed by Ted’s son Kris. On entry he found the VHF radio was not working so spent the next day dropping and raising the mast so that the aerial could be fixed. He plans to restart on Thursday 21 May when Ted will be back.
Sandy lady crossed the Thames estuary on Sunday 24 May from Ramsgate to Brightlingsea, partly in company with another Parker, Kotick. The weather was generally sunny with a light but a cold wind. They had an excellent meal at the Kovatam South India restaurant, then went on the next day to Walton, Titchmarsh Marina, then Orford on the Ore and Aldeburgh, where they were on visitors buoys. On Thursday 28 May they went from Aldeburgh to Southwold, which involved about 8 miles just to get out of the Ore, and went on early on Friday to Lowestoft to avoid the forecast gale. The sail to Southwold was bumpy (three reefs at one stage) but downhill. “We haven’t had to beat at all so far. The weather is changeable at the moment and the next leg will be long. May be here for a day or so.”
On Sunday 17 June Jim reported that Sandy Lady had sailed up the Lincolnshire coast and arrived in Grimsby.
On Tuesday 21 July Jim reported: We have now almost completed our round tiny Britain, as I think we should call it (through the Forth and Clyde canal rather than the Caledonian). Sandy Lady is currently in the Bowling basin on the Clyde waiting for a final sail to Bute/Rothesay which I have visited before from the west side.
We had a second break at Grimsby but then managed to get all the way to Port Edgar (calling at Spurn Head, Bridlington, Scarborough, Whitby, Sunderland, Amble, Lindisfarne, and Eyemouth on the way). Aside from a breezy arrival at Bridlington and a tremendous thunderstorm approaching Amble, the weather was mainly quite light, and we did a fair bit of motor sailing to make sure of catching tides and to get in before dark.
At Port Edgar we were hoping to go immediately into the canal at Grangemouth, but there was a royal visit which stopped all movement for three days (we had two ribs of Royal Marines moored next to us in Port Edgar). My loyal crew, Ted, went home for his son’s 30th birthday after helping to drop the mast, and I took Sandy Lady up the Forth to the canal on my own. Scottish canals provided help to get SL up the locks and the Falkirk Wheel, and I motored up to Edinburgh to collect Margaret and the dog (Lady). We then took six days including a rest day to get to go bowling on the Clyde.

You can see pictures of Sandy Lady on Facebook at ‘Sandy Lady 2015’.