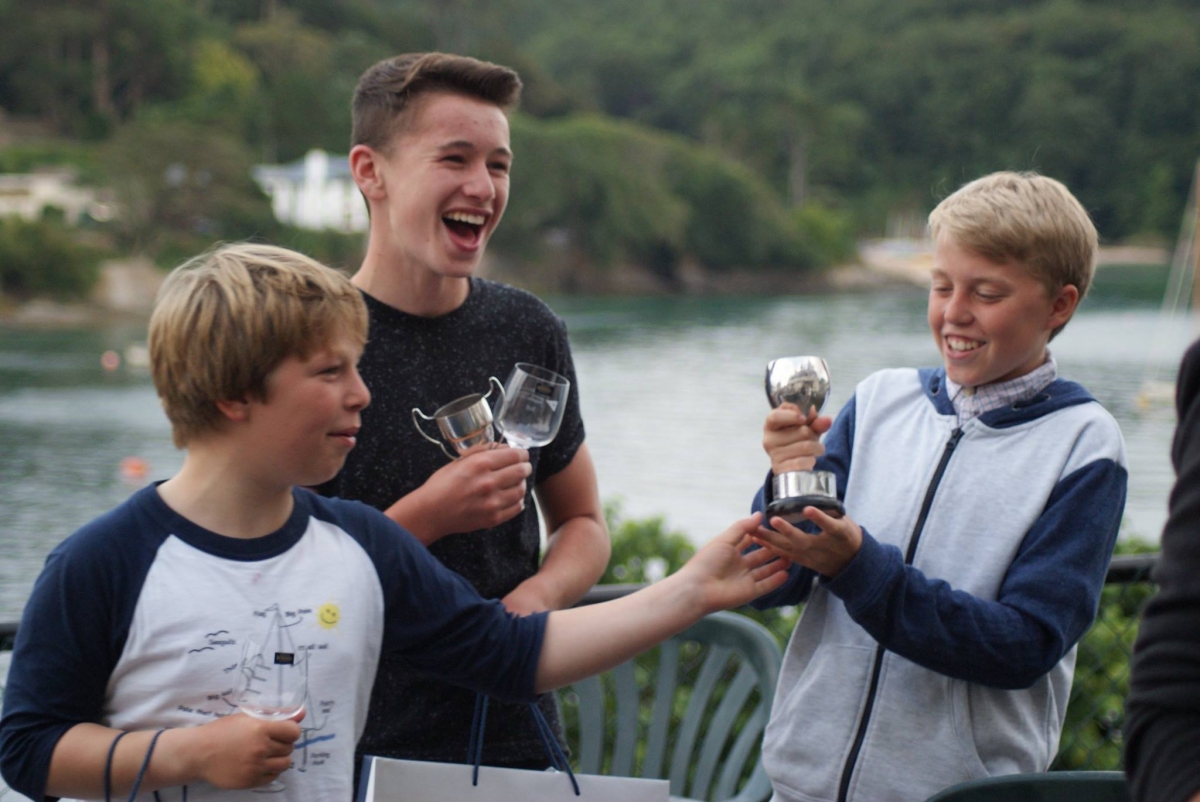 We arrived at Batson Boat Park for 10am on Saturday. After rigging the boats Ben and I sailed them over to Mill Bay ready for the race the following morning.

As the race started the wind picked up and I caught up Ben and worked my way into first place. Which I managed to hold until the end of the race so I finished in 1st with Ben in 2nd. There were 8 toppers in the fleet but only 6 in that race.

Before the start of the race I capsized 3 timed before the race. Ben capsized a few times before the race as well so decided to retire. As the race started we were sent up to mark number 1. I rounded the mark in second behind George (a local sailor) after capsizing 3 times on the beat up. The next mark was number 7 and it was a long run and reach up the bag. Outside the yacht club it was very windy and I turtled 4 times on the run one of them included a nose dive. However I remained in 2nd and rounded number 7 in second. By the time I had rounded it George was a good 400m ahead of me and Oli 100m behind. (Oli is a friend of mine who was also sailing a Topper) The next mark was number 2 then 3 then across the line. After rounding number 3 I realised George was quite close to me and after crossing the line on a windy beat against the tide George beat me by 45 seconds, despite me capsizing 8 times!

The course was 3,2,3,2. As the start gun went off it was a light beat up to 3. I rounded the mark in 2nd place. The run down to 2 was very light and I lost my position to George who took 2nd place. As I rounded 2 in 3rd it was another light beat against the tide. I caught George and Oli to take 1st place and rounded number 3 in 1st. Unfortunately on the run down Ollie and George both came past me holding those positions round number 2 and on the short beat to the finish. The results were Ollie 1st George 2nd Harry 3rd Ben 4th.

It was a windy start and Ben decided to retire. We were beating up to 7 and I rounded 7 in 3rd. Oli who was in 2nd place capsized in front of me, unfortunately as it was low tide I ran aground up at 7 and got stuck in irons causing me to lose Oli. I capsized 6 times and crossed the line in 3rd place.

Ben decided not to sail this race as gales were predicted. The start was very light but picked up closer to mark 5. I followed the local boats up the inside of the pontoons. Oli the 3rd boat decided not to go inside the pontoons and lost a lot of ground on us (George and I ) I rounded number 5 in 2nd place and held on to it to the line so I finished in 2nd place.

My friend Oli’s results were 8,1,2,2,3. So with a discard we had the same results. It was all down to the last race to see who finished 2nd and who 3rd.

As the wind was so light and the tide so strong I jumped out my boat and held it until the start. As the start gun went I jumped in my boat and had an okay start. As we were heading up to number 7, Ben sailed very well and left George, Oli and I far behind. I rounded number 7 in 2nd place 200m behind Ben.

As we got closer to the harbour we got closer to Ben. Unfortunately George and Oli overtook me near Snapes point were the wind had got very light and fluky. By mark number 2 Ben had been overtaken by Oli and George and was in 3rd place. On the beat to the line from number 2 I overtook Ben as he capsized and finished 3rd with Ben in 4th. The results were George 1st, Oli 2nd, Harry 3rd, Ben 4th.

We all attended the prize giving, Oli and I had exactly the same results but as he beat me on the last race he claimed 2nd place behind George who took 1st and in front of me who took third, Ben came 5th.

I had to go up in front of everyone to claim 3 prizes which included first race win trophy, 3rd place cup and a Henri Lloyd spot prize.