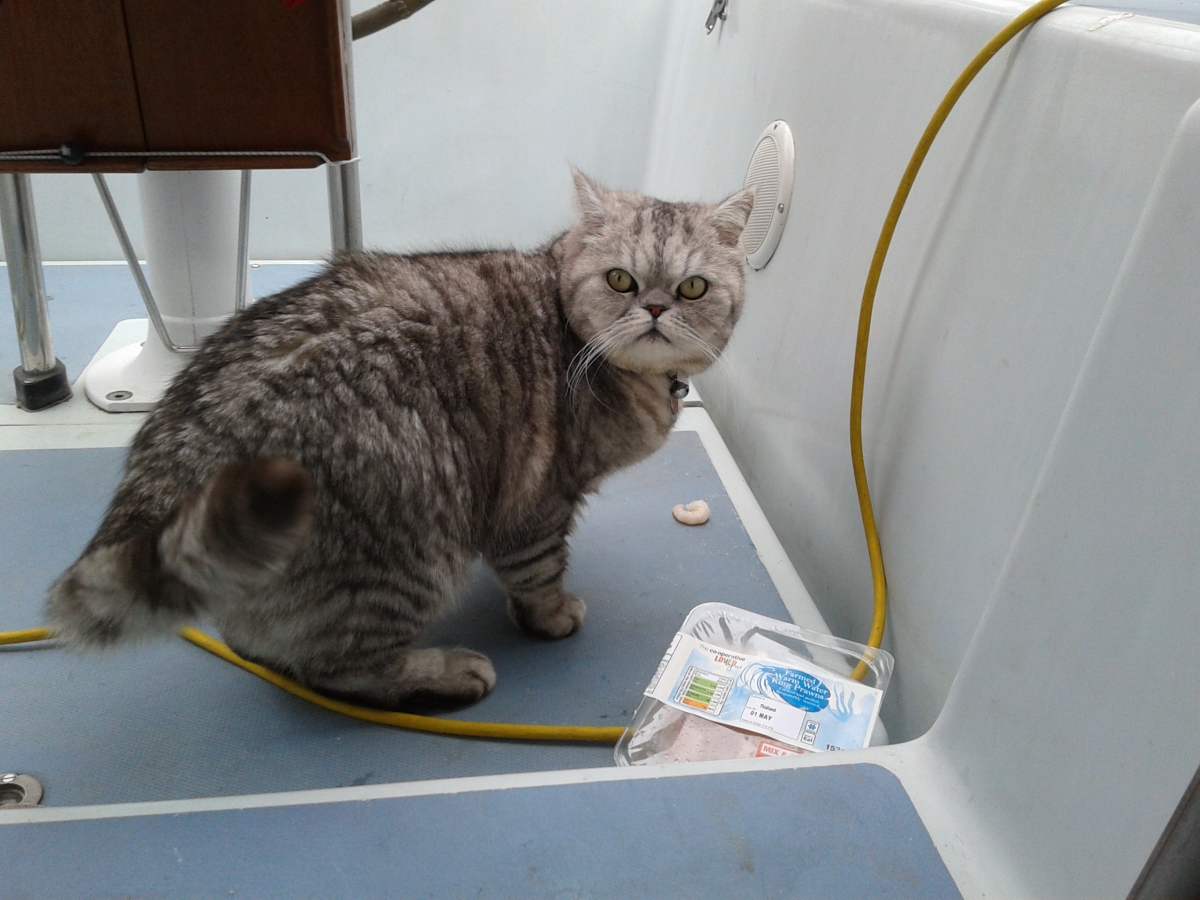 Tamesis members Tony and Leonie Steer, who have been are sailing round Britain in their Moody 33 Shen Shui, completed their voyage on Wednesday 2 September.

Leonie reports “Shen Shui slipped into Hurst Narrows on the last of the tide and Tony anchored in the calm of the Solent for a nap before heading to Gosport, our home port, mooring up at 2.45 pm today.

Dartmouth Royal Regatta was fun and we were entertained royally by the air displays, the Vulcan, Spitfire, Hurricane, Red Arrows and the Typhoon. The Sea King and RNLI also showed their expertise off to the crowds. The Frigate HMS Monmouth caused much amusement when accompanied by a tug, and the harbourmaster and a rib full of divers got stuck on their admiralty buoy. The divers fell in (it was a spring tide and the buoy submarined), then a dolphin thought he ought to join in and splash them!  Luckily Shen Shui made a more dignified departure for the last leg of her journey home.
The weather has been dreadful this year and the new engine, fitted in March, has proved a sensible outlay as the log reads 249 engine hours! The big question now is WILL THE CAR START after 5 months?
Shen Shui sailed from the Scillies to Falmouth on 22 August.  Leonie said it was very wet in Falmouth and there was mould everywhere inside the boat. After watching fabulous fireworks in Fowey and being accompanied by a pod of dolphins round Dodman Head on Monday 24 August they sailed on towards Plymouth on passage to Newton Ferrers.  Shen Shui just got into Dartmouth on Tuesday 25 August before a gale.   They later saw HMS Monmouth go past.

They had reached the Scillies on Friday 31 July and spent some time anchored at St Mary’s.

They began their circumnavigation from Cowes on 25 April having left their home port of Gosport earlier in April but had to back track to Chichester to resolve a problem with electronic charts. Shen Shui next reached Blyth where Tony moored up with help from a friendly harbourmaster. He found sailing single handed overnight made him hallucinate. Leonie reports that they diverted to Whitby on passage from Lowestoft to Scarborough because of an un-forecast gale. Leonie and Oscar, the ship’s cat, plan to re-join the yacht in Scotland after her daughter had returned home to Australia. Oscar has got his sea legs back thanks to a bag of prawns which cheered him up enormously.

Shen Shui arrived in Eyemouth, Scotland, at 18.00 on Sunday 17 May. Leonie reported on Thursday 21 May that Tony’s new engine stopped, going through the Farne Islands. It was so rough air got into the fuel pipe. He moored in Eyemouth with the help of the harbourmaster and waited there for his brother to join him. So no progress that week. But safe and sound!

On Thursday 28 May Leonie reported that Shen Shui had arrived in Fraserborugh and was gale bound, tied up among the local fishing fleet. Tony and his brother sailed into Inverness at midday on Saturday 30 May.

Leonie rejoined Shen Shui on Sunday 31 May for the sail across to the west coast through the Caledonian Canal. On Tuesday 9 June Leonie sent the following report:  “Here we are in the Caledonian Canal. The pass costs £198 and covers the 8 days transit. We started at Inverness and came out at the sea lock Corpach on Sunday the 7 June (that’s Fort William). As you can see from the picture it’s snowy on the peaks and it was very cold still. We slept in socks and thermals moored to a buoy in Lock Ness. It was too deep to anchor.  Amazing scenery.  The locks go upwards towards Lock Oich, the highest point, then downwards towards Corpach.  We pulled the boat through the locks as engines are switched off then, so three people on board are needed. The men pulled and I steered and fended off.  Tony’s brother Derryk has crewed around Scotland with him. As you can see, Scotch tasting ranked high on leisure activities! ‘Neptunes Steps’ under Ben Nevis has nine locks, a road bridge and a rail bridge in succession, so victuals were ‘essential’.

She later added “After 29 locks and 10 swing bridges Shen Shui needed a good wash before heading out to the West Highlands and Corran Narrows. Tony and Leonie returned to London to see their grandchildren in mid-June and Leonie said at Tamesis on Thursday 18 June that Shen Shui had been temporarily left on moorings at Oban on the west coast of Scotland pending their return to sail south along the east coast of Ireland. They later berthed at Campbeltown.

On Tuesday 4 August Leonie reported  that Shen Shui had arrived in the Scilly Isles on Saturday 31 July after a 27 hour motor sail from Waterford, Southern Ireland. They left Waterford for Cork despite an unfavourable forecast and after seven hours beating to windward decided to put in to Dunmore East, a small fishing port on the south coast. The weather was dreadful in Ireland so Tony and Leonie became sightseers and hired a car to tour the country. Waterford Crystal, Tipperary, Limerick, The Wild Atlantic Way and Kilarney were all explored. “So now Shen Shui is chained to a buoy in St Mary’s, again being pounded by big seas. A spell of warm, settled weather would be much appreciated. We keep getting new leaks and have to air our clothes in every dry spell that we get!” See you soon. Leonie”