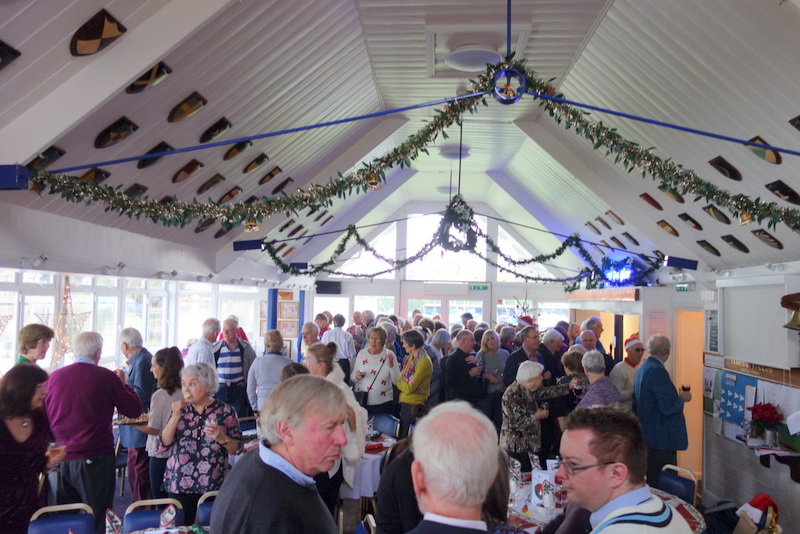 This year’s Tamesis Christmas Lunch was a tremendous sell out with new applicants regrettably having to be turned away after a hundred members signed up to attend.  In the interests of both safety and the ability of the kitchen to cope with the preparation of a roast turkey lunch for such a large number, John Adams, Rear Commodore House, apologised for being unable to accept any late applications.

In comparison, the pre-lunch race for Christmas pudding prizes was almost a wash out – not because of rain or too fast a stream but because of a shortage of wind. The 12 competing boats included six Merlins, five Lasers and a National 18. Commodore Stewart Colley, dressed in a Santa Claus hat with a necklace of sparkling golden Christmas decorations, was Race Officer and gave the fleet three rounds of a modest course in front of the Clubhouse and dinghy park. The winners were Merlins – Ken Duffell and Joe Woods, Lasers – Mike Goldsmith, and National 18s – Doug Pope and Jose Ugarte. However, as this was our annual Christmas Pudding race, everyone who participated on this grey and miserable morning got a well deserved prize.

Stewart also presided at the lunch, beginning with a grace devoted to the safety of sailors everywhere, especially those in war ravaged parts of the world.

The four course lunch was prepared by Steve Katz with the help of lady members of the House Committee and served by the Kitchen staff, of Jo, Karina, Lauren, Natalie, Josefin and Theo, who also went round offering a selection of pre-lunch nibbles.

Santa arrived after the pudding had been served, having parked his reindeer in Bushy Park with their friends, and distributed presents to many of the youngest and oldest members, one of whom is now 96.

The event was concluded with the traditional carol singing, led by Brian Southcott and Jock Wishart, in which the members at the numbered tables were duly called upon to sing “The Twelve Days of Christmas” and to jump up to sing their table number of turtle doves, calling birds, gold rings, swans a swimming, lords a-leaping and drummers drumming.  Most went home looking for a “Silent Night”.

1 thought on “100 members make Christmas Lunch a “sell out””