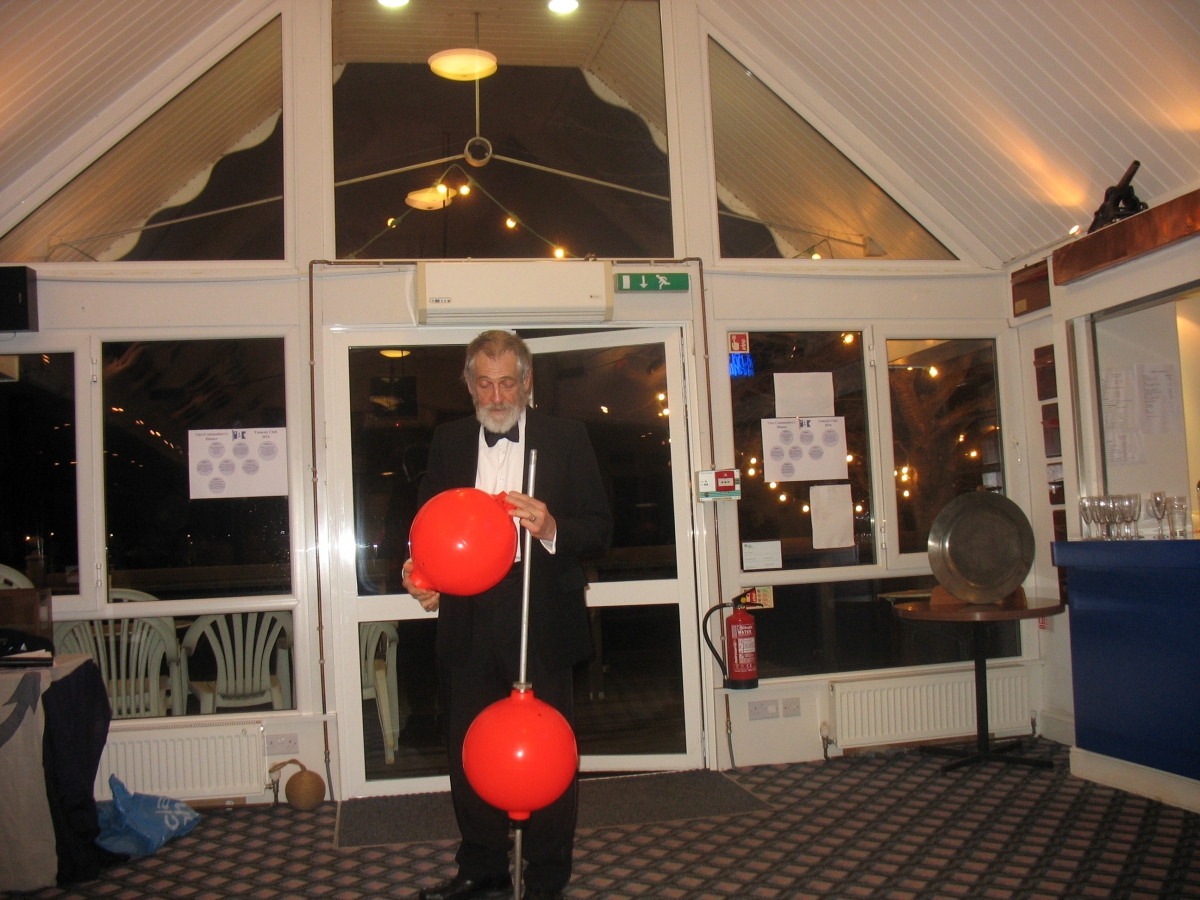 Uffa’s Spoon, the much esteemed trophy presented by the late Uffa Fox in 1932 for the silliest gaffe by a Tamesis member during the preceding year, was presented at the 2016 Vice Commodore’s Dinner on Saturday 20 February to Club Bosun, Paul Jamieson.  Speaking to an audience of 63 members and guests, Vice Commodore Carolyne Vines, the previous winner, had the audience in stitches of laughter as she told how Paul replaced a badly damaged outer distance buoy only to discover it had already been beautifully repaired by another member.
When the mark was damaged by a passing boat, Alan Green, Rear Commodore Sailing, asked the Bosun if he could repair a broken race mark. “Of course” was the reply as the Bosun took charge of a metre long metal stem, broken in half.  “Where is the buoy itself?” The conclusion was that it had probably slipped off and floated away downriver. The stem was securely repaired, a new buoy bought and fitted after a brief hiatus for the replacement of the first new, but faulty, float.  Just as the repaired buoy was due to be reattached to its chain and anchor, who should appear but ex-Commodore and Bosun Peter Simpson carrying the original buoy with a brand new stem and fittings.  “What have you got there?”…”Well, what have you got there?”  “It’s the Club mark!”  “So’s this!”

Two minds, two enthusiastic repairers, two racemarks, but only one place to put it!

Earlier in the evening the Seacock Trophy, awarded for the biggest cock-up by a member of the Tamesis Offshore Group, was presented by Marcus Chavasse, the 2015 winner, to Martin Adams for anchoring a chartered yacht so far offshore in rough weather in a harbour that none of the crew could get ashore. Marcus said Martin “may have been influenced by his skirmish with wasps in Malia Cove. He chose not to return there. He took us to Patatiri (against advice in the pilot book). In Patatiri, there was so much slop in the harbour that we were moving fore and aft 1-2 metres, snatching at the mooring lines. The gang plank at the stern was extremely hazardous. The ladies were unable to go ashore. We spent the most uncomfortable night on board that I remember enduring in any harbour.”
Earlier, Steve Osgood, the donor of the trophy, recounted how the trophy came to be given, after the interior of his yacht was flooded to berth level because Roy Doughty, a crew member, had inadvertently left the heads seacock open.
The black-tie event was organised by Carolyne Vines with the help of John Adams. Rear Commodore House, whose wife, Lesley, cooked a delicious meal, with help from Jo Carstens, and Rhi, Karina, Alicia and Jemima. Harbour Master Chris Pollard designed and printed the menus, and David Baker supervised the drinks. John Adams also thanked all those who had helped to lay the tables.