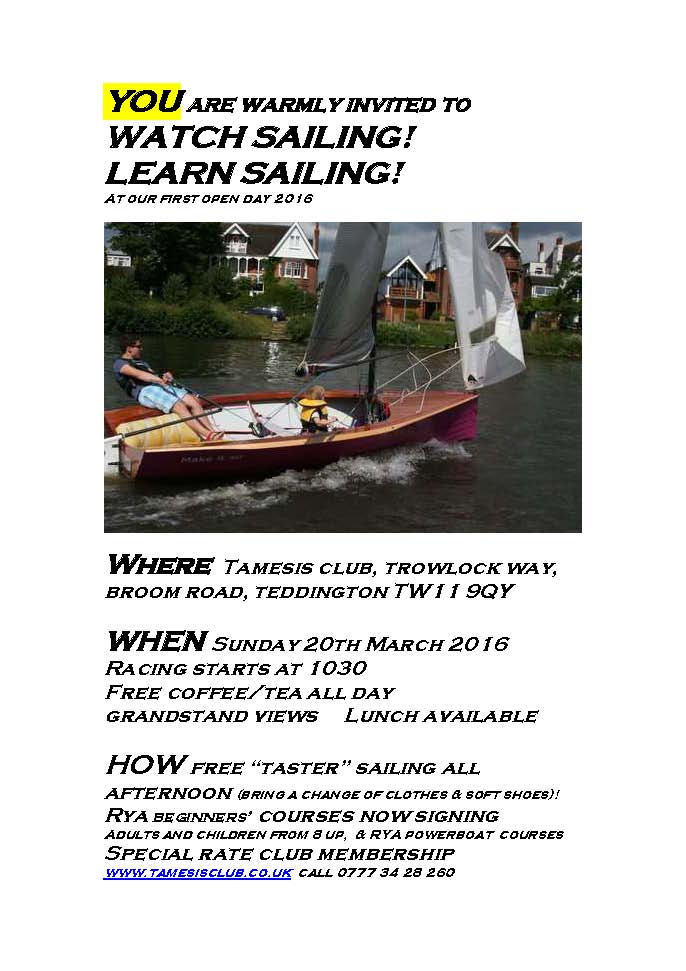 The open day on Sunday 20 March organised by Vice Commodore Alan Green and Eric Finlayson with help from Commodore Carolyne Vines and members of the Sailing Committee was a great success, with 18 visitors asking to sign in as new members.

Those who arrived in the morning watched five Merlins, three Lasers and three National 18s compete in the last race of the winter series and spent the afternoon trying sailing for themselves in a range of boats which included a Wayfarer, Laser 2000, a Laser and several Toppers.  They were taken out by Eric Finlayson, Howard Thatcher, Michael Vasey, Malcolm Warner, an RYA instructor, and Lucien Schwartz, all experienced helmsmen, who did a great job taking kids and parents out in the different boats. All were required to wear lifejackets.  Alan Green spent a lot of time in the dory providing safety boat cover.  Florian Krueger took many visitors out in the club launch so that they could get a river view of the sailing.

The light north easterly wind was ideal for beginners, which included 15 children, and many had wisely brought wetsuits to keep out the cold.

Angela Caldara did a great job doing registration and signing in new members. We received nine applications for membership, five from cadets, and eight for sailing courses.  During the lunch Eric Finlayson presented an assistant instructor certificate to newly qualified Megan Bourne.  He said many of the visitors were there because of word of mouth recommendations from existing members. First indications were that there is an encouraging demand for RYA training so more help may be needed in future.

The clubhouse was full of old and new members and visitors at lunchtime.  Free tea, coffee and cakes were provided for visitors and Jo Carstens, Rhiannan Jones, Jemima and their colleages in the kitchen provided an excellent lunch of hot soup, roast meat and sandwiches.