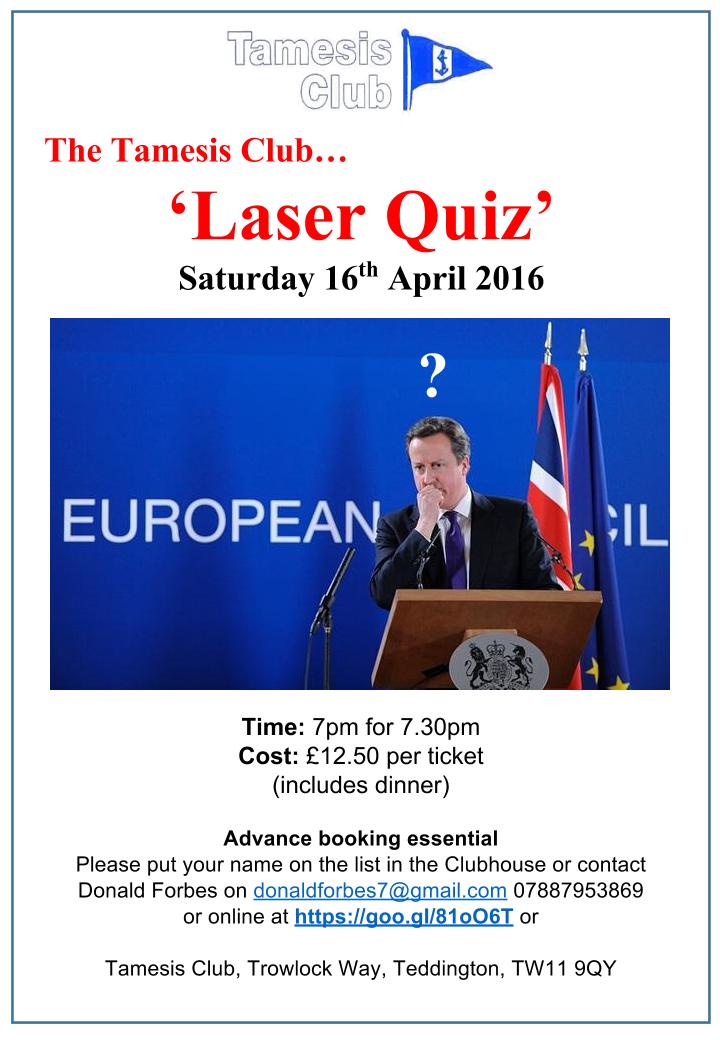 Rosalind Fletcher,  winner of the raffle

Sixty two Tamesis members and guests in eight teams struggled with a series of fiendishly difficult questions at the annual Laser Quiz on Saturday 16 April for the honour of being able to organise the event next year. The quiz was won by team Ad Hoc, led by Colin Stokes, after some confusion about whether there had been a tie, between teams Kainos and Ad Hoc, leading to a decision by Quizmaster Kaan Yargici to resolve the matter by having a draw.  The outcome was to award the task of organising next year’s quiz to Team Panama, which had been in third place.

Led by Tamesis Commodore, Carolyne Vines, Team Panama had some good results from a picture round in identifying famous ships like the Mary Rose and HMS Warrior, but fared less well on a picture round of famous buildings and were unable to identify any of the famous voices from TV programmes like Fawlty Towers and Strictly Come Dancing.  They did, however, provide the answer to the question that everybody got right – What is the name of the Tamesis Commodore?

The event was organised by Laser Class Captain, Donald Forbes, with help from Kaan Yargici and Tamesis Bosun, Paul Jamieson, who provided the computer support.

A delicious supper of lasagne and fruit crumble and cream was provided by members of the House Committee, led by Rear Commodore Nicky Johnson, with the support of Laser sailor Rosalind Warwick Haller, Joe Carstens and Lauren, and drinks were served by Rosalind Warwick-Haller helped by Daniel Gerber, Florian Krueger, Carolyne Vines and Sailing Secretary Stewart Colley.

The raffle for a box of wine glasses was organised by Nicky Johnson and won by Rosalind Fletcher, and bottles of wine were presented to the winning teams. The Commodore thanked all those who had taken part in the organisation of a very successful event.