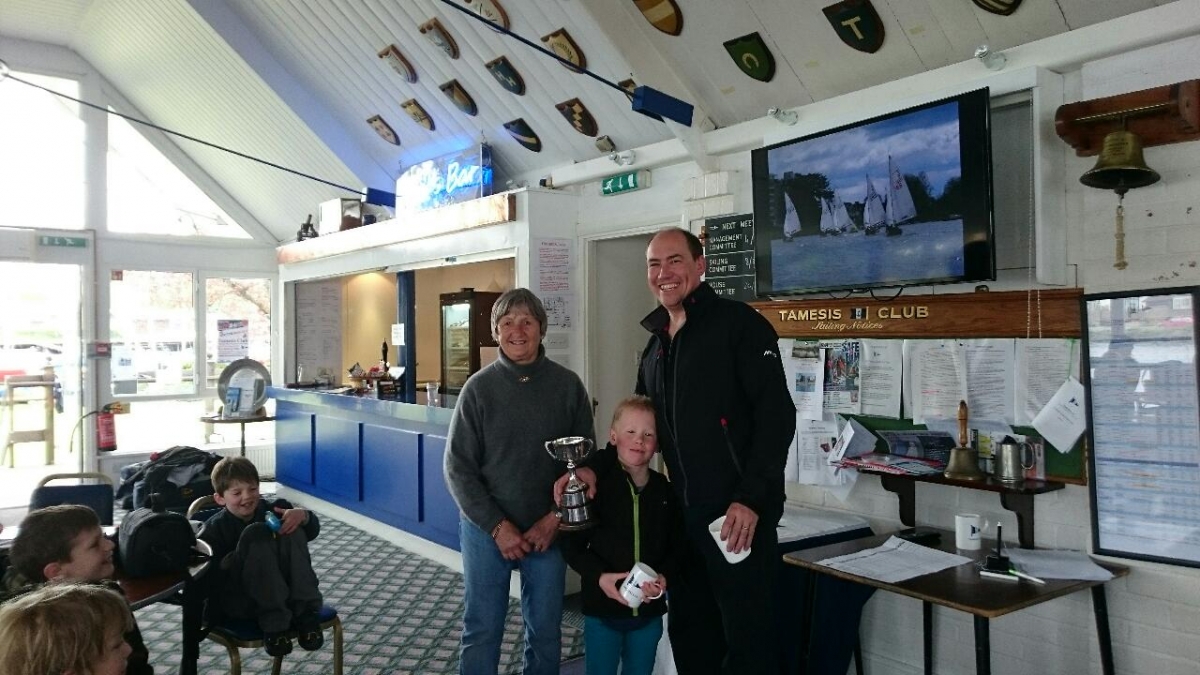 Alex and Thomas Davey of the Royal Harwich YC won the Elizabeth Cup at the Tamesis open meeting for Fireflies on Sunday 24 April.  This was the third time Alex has won it.

Sailing Mustard (2649) in a cold and blustery northerly wind, they fought off the competition from the 10 boat fleet, to win the first two of the three races and were second in the third. Nigel Wakefield and Emily Sanderson were second in Flo (3674).

The event was organised by Sue Harris, Tamesis Firefly Class Captain, with help from Tamesis Commodore Carolyne Vines. Donald Forbes, the Race Officer, was assisted by Peter Johnson, and the patrol boats were operated by Chris Pollard Paul Jamieson and Robin Lince

12 boats made their way to South-West London for the annual Firefly Junior Cup at the Tamesis Club. This event is for the children – and there seemed to be quite a few of them!

The blustery northerly wind was strong enough that not many of the children managed much helming, but  every boat had at least one child crewing or doing other crucial jobs such as sticking heads in the water or shooting water pistols.

There were three close-fought races on a windward-leeward course up and down the river, giving lots of excitement for both the sailors and the enthusiastic crowd on shore. Special mention must go to Olivia Powell, who on one of her first competitive outings in a Firefly was capsized by her dad… luckily there was plenty of restorative tea and cake on offer in the ever-hospitable Tamesis clubhouse.

In the final race of the day two intrepid children took to the helm: Thomas Davey and Matthew Mason, both aged 8, and crewed by their dads (who have a long rivalry of their own). After a titanic battle all the way round the course, Matthew just held off Thomas to take line honours and the Junior Cup.

Photos of the whole weekend by Robin Lince, Paul Jamieson and Carolyne Vines
The following report was written by Steven Greaves:
After a great day’s sailing in the Junior Cup on Saturday an enthusiastic bunch of Firefly sailors turned up at Tamesis Club on Sunday 25th April to contest the Elizabeth Cup on the Thames.  Ten boats set about rigging in an unusually cold and gusty northerly and most got onto the water for a prompt start by the race officer and his team.  Those over the line (or still on the jetty) when the start gun went were soon back in the pack thanks to the vagaries of river sailing.  The Firefly once again proved what tight racing it can provide, with the younger crewed boats mixing and beating those of a more experienced nature.  When it all shook out it was Alex Davey crewed by son Thomas claiming the bullet in the first race, chased home by Nigel Wakefield and Emily Saunderson. Another pair of father / son combos of Roger and Finn Morris & Stuart and Robbie Hudson claimed the third and fourth spot. The experienced pair of Lucy Boreham / Rachel Crebbin sailed consistently into fifth.
The second race followed a similar pattern with the same boats sailing well into first and second place.  Third place was picked up by local Jamie McEwen crewed by (previous day’s Junior Cup victor) Matthew Mason having shaken off their capsize from the first race.  Matthew’s dad and sister, Will and Polly, sailed a good race to come in sixth but a few enthusiastic gusts caused a couple of capsizes, most vocally from Ed and Sophie Smith.
After a suitable break for lunch and all races to count it was back on the water to decide the medals.  Multiple class champion and previous Elizabeth Cup winner Stu Hudson, this time crewed by his wife Jane, shot off the line to an impressive and unassailable lead while the rest of the fleet fought amongst themselves.  The consistent Daveys came over the line second and took the title, with Wakefield / Saunderson third to finish second overall.  Fourth across the line and fourth overall was Steve Greaves who’d been sharing crewing duties between daughter and son Arthur and Madeleine.  Progressing over the day to take fifth in the last race were Alec and Ana Powell.
An excellent and tiring days sailing was followed by welcome tea and cake to complement the prizes.  An excellent event run by the members of Tamesis – see you next year!