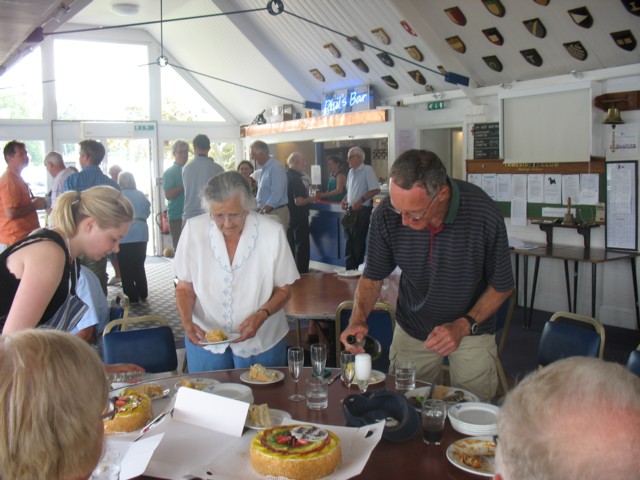 Peggy Morris, one of Tamesis Club’s oldest and much loved members, passed away on Thursday 7 July.  She was 95.

Her death followed a heart operation in St. Thomas’s Hospital.  She was active in the International 14 and Merlin Rockets classes in the 1960s and 1970s, and in recent years enjoyed watching the racing from the clubhouse.   An enthusiastic member of the Tamesis Bridge Group, Peggy was the generous donor of the club’s television screen.  She drove to the club almost every Sunday for lunch on her mobility scooter, which she called Alfred, and was especially popular with the catering staff who went to great lengths to look after her.

Peggy was the widow of Dr Colin Morris, who died from a heart attack while racing his International 14 at the club.  They had two daughters, both of whom predeceased them.

More than 60 relatives and friends attended the funeral at Mortlake Crematorium  on Monday 25 July followed by a reception at Tamesis Club.
Donations in memory of Peggy can be made to the Shooting Star Chase Children’s Hospice c/o Frederick Paine Funeral Directors, 102 High Street, Teddington, TW11 8JD.