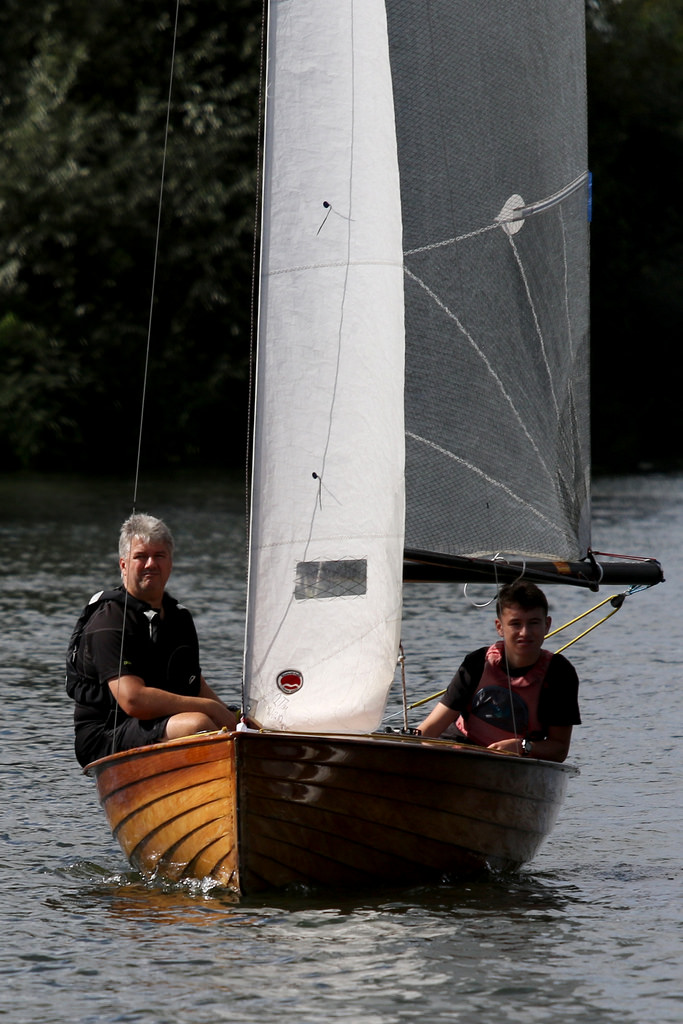 Richard and Harry Harris were second overall in the Merlin 70th anniversary silver tiller races for the Allen Challenge Cup at Upper Thames SC on Sunday 11  September.  They won the first race which was shortened after a delayed start waiting for the wind to arrive, were third in a very closely contested second race and fifth in the last (a discard). Mike Calvert won the day with firsts in the second and third races and Lawrie Smart was third overall with two seconds.  There were 22 competitors.

It was a lovely sunny day but the wind was light and from a difficult direction meaning the ideal position was creeping along the windward shore avoiding trees and weed on a close reach. Starting was problematic with everyone and his dog trying to start in the shallows on the windward shore!  Please see the link below for some photos.

Berry Ritchie and Sue Harris sailed sixty one year-old Crescendo (607) to second place in the De May handicap event for vintage Merlins held at Upper Thames SC on Saturday, 10 September.  In spite of heavy and persistent rain, over two dozen boats sailed two races before lunch in typical Bourne End conditions (very similar to those at Tamesis, it must be admitted), with boat builder Lawrie Smart the overall winner in his extensively and beautifully restored Flipside (1065). Andy Harris and his sister Sarah finished fifth in Passing Cloud (1079), with Matthew Peregrine Jones in Masquerade (995) a little further back in a strong fleet containing at least two past National champions.  Mervyn Allen in the class prototype, Kate, build in 1945, was a distinguished tail-ender.

1 thought on “Richard and Harry Harris second at Bourne End”