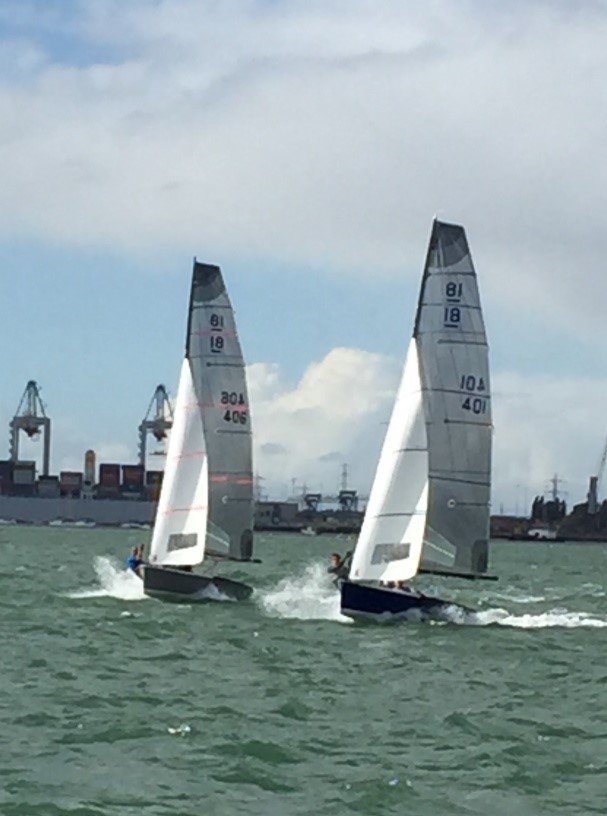 The National 18s Ultra ‘Shadow’ nr 412 was displayed on a stand at the Southampton Boat Show this year.  The boat attracted a lot of attention, and it is hoped the 18s will take a stand at the Show next year.

Two 18s took part in ‘The Battle of the Classes’  which took place on the Sunday of the show.  Panther (406) with Gregor Davidson, Jess Berney and Ollie Southgate, and Hurricane (401) with Ollie Houseman, Doug Nestor and Jeremy Vines.   A 90 minute pursuit, raced in Westerly 20+ knots with lots of reaching.   Panther was 18th and Hurricane 30th .  Though not deliberately attention seeking, Hurricane had a collision with the Committee boat, and Panther a capsize four minutes before the N18 start and still crossed the line on time.  Hurricane also lost wireman Doug for a while and he showed he had a good front crawl by catching up.

Shadow on the stand with Max Vines attending

Shadow and Hurricane blasting across the Solent