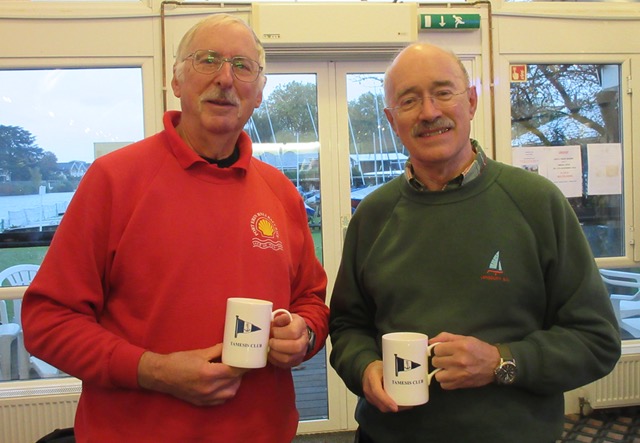 Chris Rowsell and Alastair Stewart at the prize giving.

Eighteen boats started in fairly testy conditions, a F3 cold NW with rather stronger gusts. The start sequence commenced at 1055 with first boat to start a Topper a little late for its 1105 time setting of downstream to a mark half way to Lensbury. A lone Enterprise, a visitor from Lensbury, set off at 1120 followed one minute later by seven Lasers including some from Lensbury .  At 1120 eight Merlin Rockets joined the race.

The Enterprise overtook the Topper and was itself overtaken by a single boat, the Merlin Rocket of Richard & Harry Harris.  The rest of the fleet having more of a battle with Donald Forbes and Kaan Yargici  in their Lasers being overtaken by Joe McLaughlin & Sean Roberts in a Merlin during the final minutes.

The gusty conditions and the cold proved too much for some as four boats retired before the 1230 finish.

About half the fleet had opted to do only one race and they were joined by more who decided not to enjoy the calmer conditions of the afternoon race in which only four boats competed.  The Enterprise crewed by Chris Rowsell and Alastair Stewart started first at 1440 followed by Chris Taggart In his Laser then the two Merlins of Chris Balmbro & Clara Wade and Ken Duffell & Joe Wood.  The Enterprise lead was never troubled but both Merlins overtook the Laser and had a tight battle until the later stages of when Chris & Clara pulled ahead.