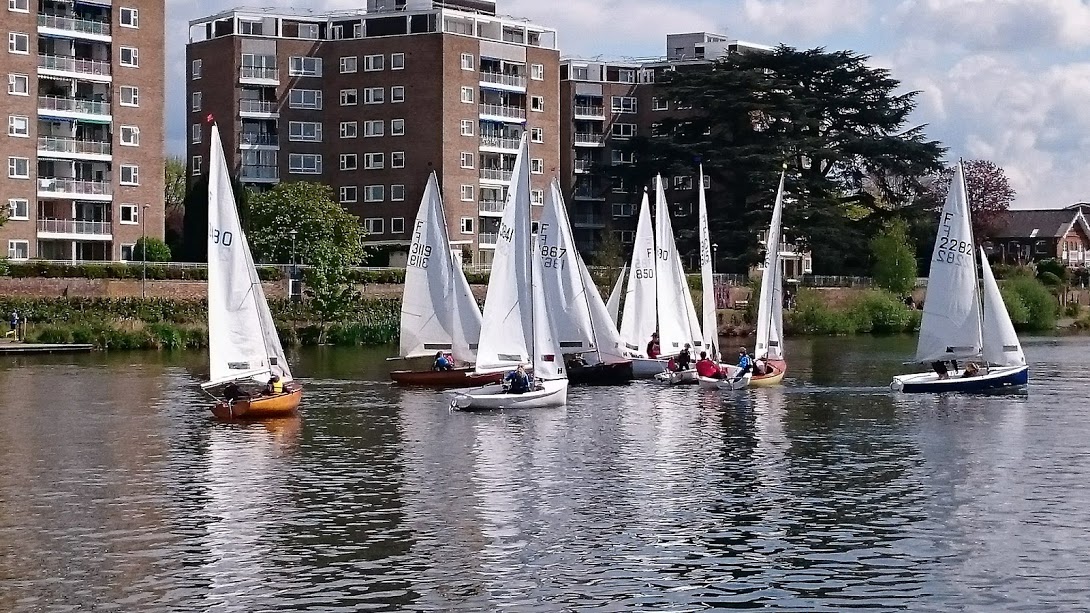 Saturday the 22nd of April dawned with near perfect conditions, meeting sailors who awoke ready to head to South West London to take on the challenge of sailing Firefly dinghies on the Thames. On reaching the club visitors and home teams alike were welcomed with the excellent site of the club flags flying (all preparations having been excellently orchestrated by Commodore Carolyne Vines and outgoing class-captain Sue Harris), the sun shining and conditions looking generally benign but enticing. The stream in the Thames was light and the breeze similarly a relatively consistent F2 (occasionally F1) northerly.

Nine visiting boats were duly assembled.  The Daveys came from Royal Harwich, returning nearly to the scene of their now famous Firefly victory in the Bloody Mary, and Tamesis supplied two home ‘teams’ – Andrew and Tom Harris, sailing Sue Harris’ Firefly and Matthew & Anna Dalton in Genesis. All was set fair for an exciting and close-fought set of three races for the Firefly Junior Cup. A pleasant up and down course was set – with an eye to the younger helms.

As the five minute warning sounded activity on the start line rapidly gathered pace, and the promise of close tactical racing set hearts pounding and young helms navigating the closely contested waters rapidly got immersed in the concentrated focus of fighting for position whilst avoiding collision. It was with great excitement that the fleet crossed the line for the first beat down to the Lensbury mark (downstream towards Teddington Lock) and all got away cleanly. Stuart and Robbie Hudson (Fursty Ferret) the reigning National Champion (Stuart) almost immediately drew out in front – where he remained for the entire weekend, causing thoughts in the chasing pack that Fursty Ferret was a mythical Foiling Freddie. Much jostling went on in the pack, with positions switching rapidly and some great (and some awful) tactics playing out. The Harrises were considerably hampered by Sue’s boat’s attempt to drain the Thames into its bilges; none the less they competed valiantly and demonstrated some excellent local experience to make best of the conditions.

Over the next hour and a half (and three individual races) the wind shifted through 360 degrees and visitors and home teams alike were left scratching their heads at times. Moments of frustration with the shifting winds were punctuated with rapid tacks and gybes to avoid the water pistol wielding spectators on the bank adding to the ‘fun and excitement’ with the occasional drenching. Fortunately the warm and sunny conditions meant that cooling down was the order of the day.

Whilst the Fireflies fought it out downstream the Tamesis cadets and social sailors were also enjoying the delightful conditions and it is fair to say that the 22nd of April marked an excellent day for the younger generation to experience the thrills and excitement of close quarter racing and the exhilaration of steering craft perfectly suited to the conditions in a racing situation. Anna Dalton was delighted to have had the chance to helm – and although it was nerve wracking – demonstrated real seamanship and good sense as her father attempted to drive from the front (fortunately Anna drew on all her wisdom to avoid a Firefly rapidly approaching on starboard!). Many other children were also visibly excited to have had the chance to compete in the company of National Champions and winners of the Bloody Mary!

As the afternoon drew to a close there was a palpable air of satisfaction (not least from the box where Sue and Carolyne coped admirably with keeping track of the crew and helm changes throughout). With the boats out of the water and race sheets handed in, Jamie McEwan set about the challenge of working out prizes with a complex countback, forward and at times sideways strategy resulting in a three way tie for the Junior Cup – Maddie Greaves, Arthur Greaves and Matthew Mason! Prizes were awarded to all Juniors who helmed, with another category for those who crewed (won by Elizabeth Hudson), and excellent support from the river bank received due recognition with the now famous (and hotly contested) cheering competition leading to a very difficult decision for Jamie to arbitrate – in the end a tie was declared with Polly Mason, Veronica Bickford, Ruth Dalton and Sylvia McEwen all performing admirably.

So, with all prizes awarded and boats tucked up for the night the competitors basked in the glow of the evening sun on the Tamesis lawn to enjoy a picnic and catch up after a long winter of Firefly hibernation.

Many thanks to Matt Dalton for the above report

The prizes were split into three categories: Children Helming, Children Crewing, and Children Cheering. The cheering competition was too close to call so honours were shared evenly between Polly Mason, Veronica Bickford, Ruth Dalton and Sylvia McEwen. In the Children Crewing category results were:

Close racing at the top mark

The prize giving line up