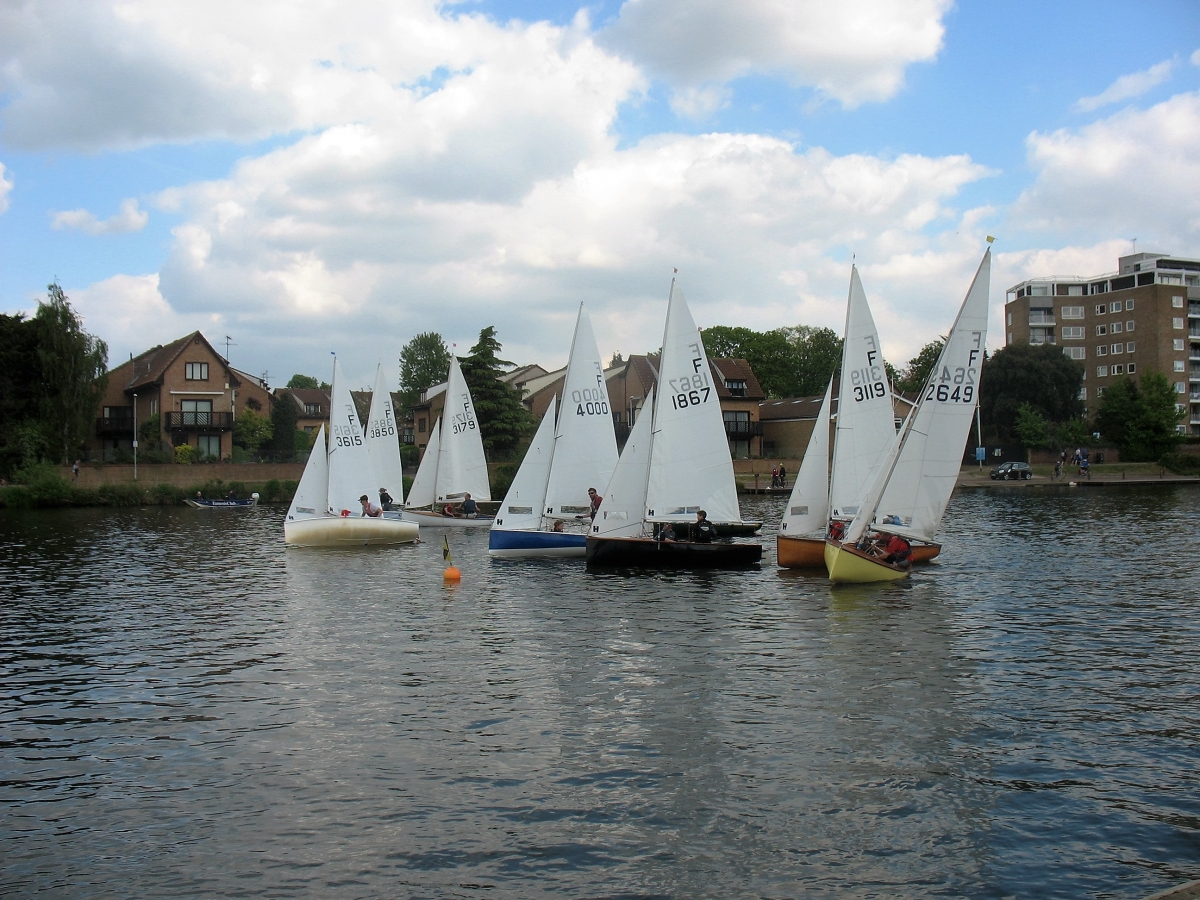 With Sunday morning came the opportunity for the adults to show their stuff in the competition for the Elizabeth Cup at the Tamesis Firefly open meeting.

Once again dawn bought with it superb conditions. The wind was up a little (progressing toward a F3, occasionally F1) and direction a little more settled with a westerly. It’s all a bit relative on the Thames though.  Saturday’s protagonists were joined by Lucy & Rachel sailing Willow from Chichester. Again, Tamesis members and visitors were greeted with the club flags up, clubhouse open, and conditions looking excellent. Donald Forbes (Officer of the day) had organised things excellently and a straight-forward and comprehensive briefing was delivered at 10:30 (around which time those competitors who had failed to sign in were chased down and all bureaucracy completed successfully).

In celebration of the Firefly open (OK, that may be stretching credulity a little) the Queen’s rowing barge (Gloriana) was making her way from Hampton Court to Richmond. With her transit of the race-course set for 11am the first race was held on a postponement until the flotilla had passed. As she came into view cheers could be heard from the opposite bank and a glorious view was available to all stood on the Tamesis river front.

As soon as the flotilla passed furious activity took hold of the Firefly fleet in the rush to get in the water and onto the start line for the 11:30 start. All made it. The home ‘teams’ saw a slight change of configuration with the Dalton team being the adults (Matthew joined by Cathy) and the Harrises swapped out for Ken Duffle and grandson Matt, campaigning in Jim Hamilton’s ‘Fiasco’.

The first race got away cleanly and once again Stuart Hudson set the pace. His lead was put under considerably more pressure though. Had the chasing pack not converged quite so magnetically at the first mark it is entirely possible that his position could have been in doubt. Instead a most remarkable conflation of Fireflies clustered at the Canbury mark and consternation from many helms and crew could only further confuse the issue. But, once rounded the fleet then quickly got on with some tight racing and excellent boat handling to reach off toward the downstream mark at Lensbury before encountering one of the legendary Tamesis ‘lulls’ just short of the mark and having to make a snail’s pace around before finding clean air once more. Those with roll-tacking skills and experience used them to good effect to maintain momentum and draw out a further advantage over those more sedate teams.

As ever the rich got richer, and those who could read the shifts and make good use of them extracted the maximum advantage. Meanwhile toward the rear of the fleet great enjoyment was had and many tips and lessons picked up.

In the second race the stand out performance came from the McEwan boat with Jamie and Angus being a little over excitable at the start, resulting in a return to the line and therefore a first leg considerably behind the fleet. However, over the ensuing three laps they tenaciously clawed their way back up the fleet to finish a very respectable third.

Whilst the winner was never in doubt the remaining podium positions were hotly contested, and rivalries from the past swiftly emerged to drive competitors on. For the final race Stuart decided to take a breather and with the master of the river off the course the fleet was thrown into confusion with the need to remember the course and not play follow the leader. Improving on two second place finishes in the first two races Alex and Thomas Davey (Mustard) moved up to pole position. Another performance of note in the third race was that of the Morris crew, Roger and Anna, who finished the third and final race in a good third position. Thus an excellent weekend was rounded out.

The final positions were:

With the final positions claimed a wonderful weekend of Firefly sailing on the Thames drew to a close. It was a great turn out, with close racing and good humour throughout – thank you for all who made the journey to the Thames to join us at Tamesis Club, we really appreciated the opportunity to host such a great fleet.

As ever, there are many to thank for their efforts resulting in a thoroughly enjoyable weekend, both from Tamesis Club who laid on a great event and also to those who came from far and wide to make it such an enjoyable weekend of racing. We are grateful to all those who helped organise, welcome and ensure that everything ran smoothly. Thank you. Of particular note we would like to thank Sue Harris who after many years of leading the Firefly class at Tamesis as Class Captain has handed over the baton to Matthew Dalton (who will attempt to lead from the front – not something that he had much luck with over the weekend!).

We look forward to welcoming the Firefly class back to Tamesis in 2018. If you’re in South West London and like what you see and would like to experience the thrill and camaraderie of river sailing we’d love to see you – so please do come and visit.

Sue Harris for organising the event assisted by new class captain Matt Dalton, not forgetting Ana, Jemima and Alicia for the catering and bar.