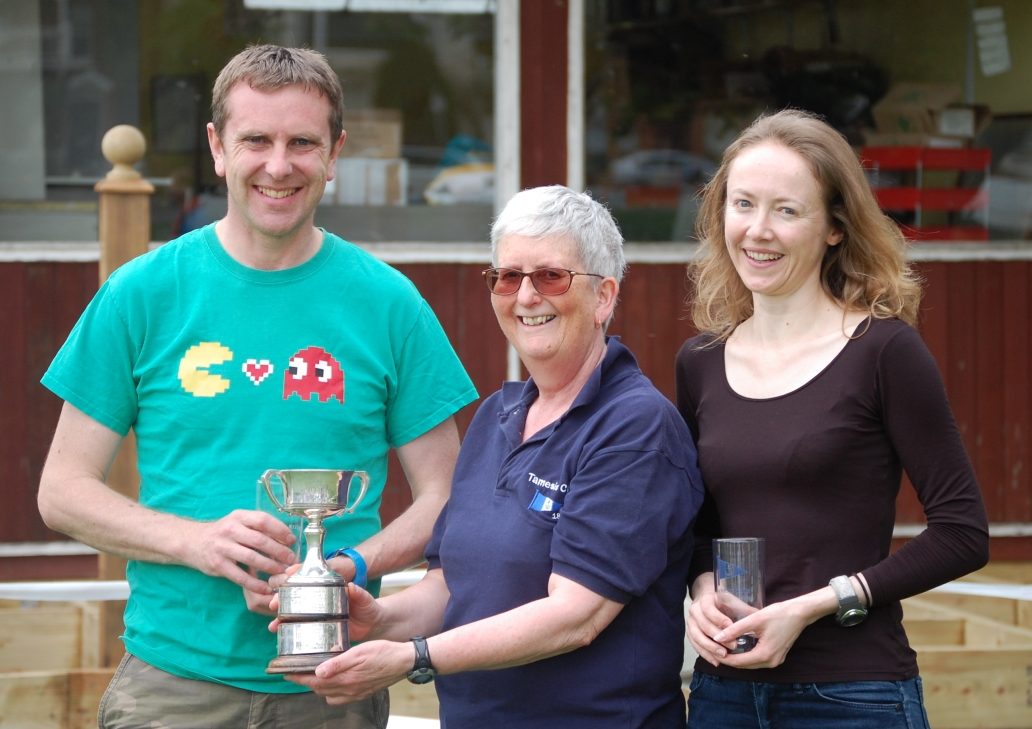 Following the success (despite the lack of consistent breeze) of the Junior Cup on Saturday the Sunday of the Elizabeth Cup dawned with a promising forecast but an absence of wind first thing. After an anxious few hours peering at various wind apps on the internet the organising committee headed off to Tamesis Club on the Thames hoping that the forecast was right. And so it was.

The home crews were joined by six visitors to the club (from Southampton, Surrey and Hitchen), racing three races (with two to count) for the much coveted Elizabeth Cup and first in the 2018 series for the M25 and the Vines trophy. With last year’s winner unable to attend there was much anticipation of who would end the day on the river crowned as the best of this season opener (with some quality crews present, and a couple of dark horses). This year we were pleased to see three new crews attending, Phil Bevan & daughter Laura Bevan (on her way back to university) from Grafham, Tim Medcalf & Ed / Henry Medcalf of Tamesis and Florian & Sara (also representing Tamesis). Following the consumption of bacon sandwiches and rigging of boats, the “P” course was set (upstream to Canbury, down to Lensbury, then a dog-leg on the return to the start line).

The first race got underway at exactly eleven o’clock in a good F3 which was a little patchy (and swirly!) in places. The nine Fireflies set off for the windward mark spread across the width of the Thames. Within 90 seconds of the start the quality of the field was evident with a number of crews making excellent headway toward the mark despite the presence of a reasonably current running against the competitors. At the end of the first lap it was Lucy Boreham & Rachel Crebbin in Willow (F3739) who led the fleet across the line first, followed closely by Ed Smith & Kirsty Hawkes in Grendel (F2803) and then first Firefly open participants Phil Bevan & Laura Bevan in Purple Doris (F3671). But the first two thirds of the fleet were closely grouped and it was all to play for. At the back of the pack the stream was playing havoc, but after a couple of mark entanglements (and some frustration with shifty winds) good progress began to be made by all!

By the end of the second lap Ed Smith & Kirsty Hawkes had pulled out in front, Steven Greaves & Arthur Greaves in Cumulus (F1867) had climbed up two places and third saw the ominous appearance (for everyone else!) of Nigel Wakefield & Emily Saunderson in Tip Top Too (F3007).

Throughout the third lap the wind increased from a F3 to F4, but at the same time more holes and swirls appeared rewarding patience, consistency and smooth boat handling. Lower down the pack places were also changing regularly and close racing – especially up from the Lensbury mark – was in much evidence. At the end of the third and final lap for race one Nigel & Emily had continued their rise through the fleet having grown accustomed to the river conditions remarkably fast to take the win, followed closely by Steven & Arthur and Ed & Kirsty rounded out the podium for the first race.

The remaining contenders crossed the line within 5 minutes of the first finisher to bring to a close the first race. 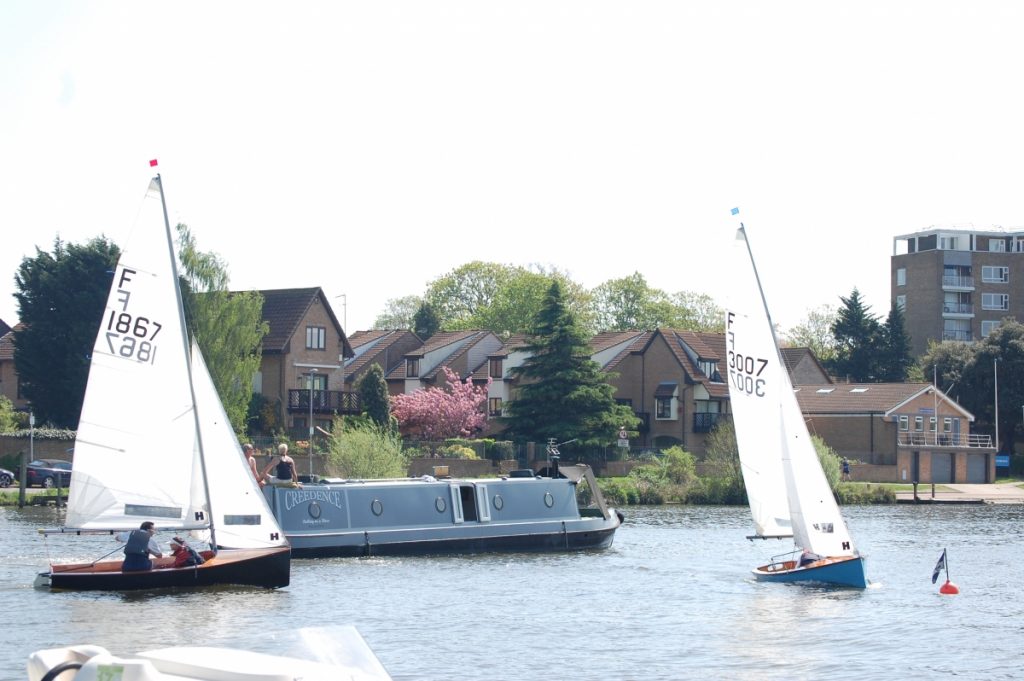 A few crew changes were made following the first race and the wind conditions had settled into a (broadly) westerly direction and built to a consistent (well as consistent as the wind ever is on the twisty Thames) F4.

Once again all nine boats lined up and set off for the windward mark at mid-day. This time Matthew Dalton & Ruth Dalton in Genesis (F3841) had a good start and rounded the windward mark in third. Unfortunately Tim Medcalf & Henry Medcalf in Scallywag (F2103) found themselves over the line and had to turn around and restart. In front, Nigel & Emily had started out race two as they finished the first and were hotly pursued by Steven & Arthur.

With the wind being alternately gusty, and then swirling through 180 degrees at times the racing was challenging, but all crews faced the same conditions. Those who were able to make best use of the shifts, patiently endure the holes and avoid the worst effect of the currents did well again – a recipe for river sailing at it’s best.

The second lap saw the Dalton’s early performance start to wain with the strong-ish breeze proving quite hard for Ruth on the jib. However, others were coming into their own and by the end of the fourth and final lap the dominance of Nigel & Emily, Steven & Arthur and Ed & Kirsty was challenged by Phil & Laura who managed to get in front of Ed & Kirsty to finish third.

All crews then returned to the pontoons to break for a well earned lunch and chance to relax from a hectic couple of races whilst catching up with old friends and making some new ones. 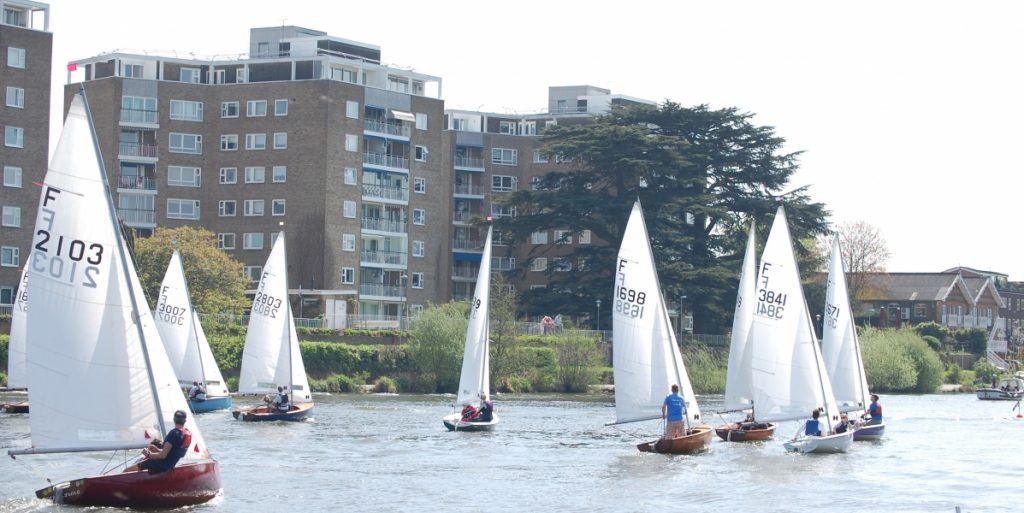 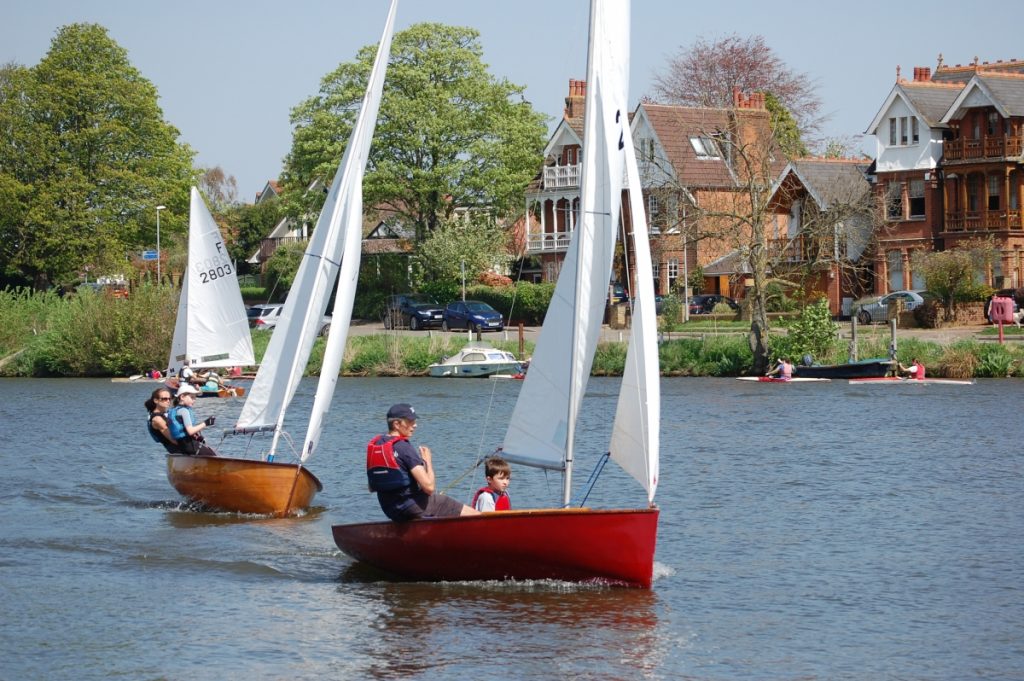 Having let lunch settle a couple of the younger crews decided to call it a day and with the format allowing a discard, settled in to watch the third and final race and enjoy the spectacle of Fireflies in the sun on the Thames fighting it out.

Nigel & Emily put on a fantastic display through the starting sequence positioning themselves just to the right side of the inner distance mark on the start line and holding their position against the stream almost inch perfect for 4 minutes. The other crews jostled for position across the line and all got away cleanly. Whilst at the front of the pack the competition was one of Nigel & Emily holding off Steven & Arthur (despite the latter making every attempt to attack) the third and fourth positions were hotly contested throughout between Phil & Laura and Ed & Kirsty. Looking back at the records from the box their relative positions changed with every lap, but in the end Ed & Kirsty just got the better of the other crew to complete the podium for the third race. 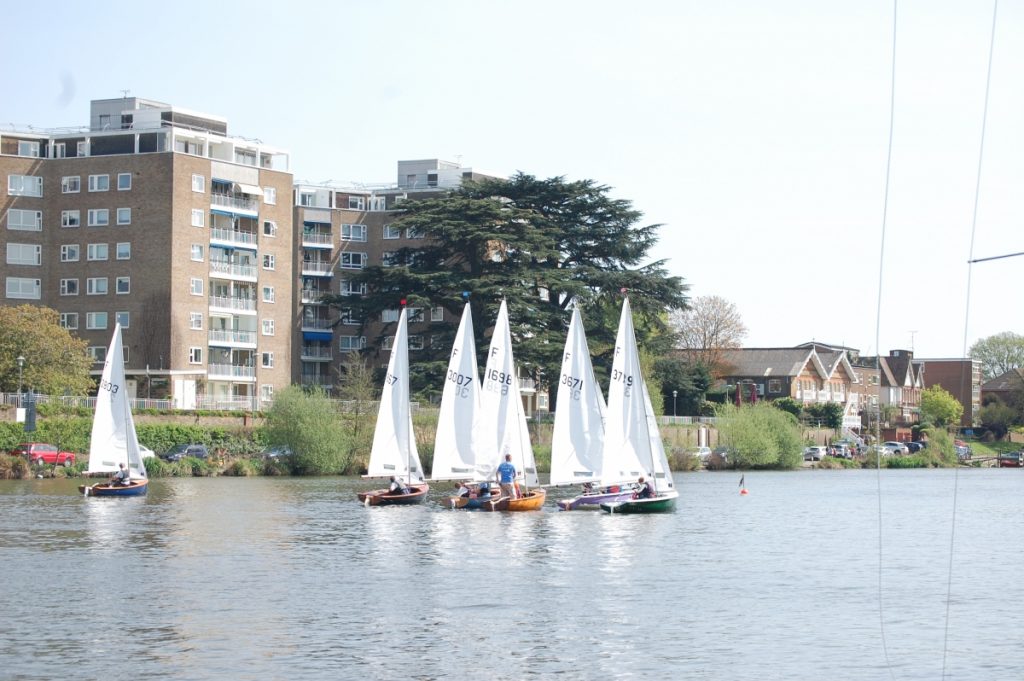 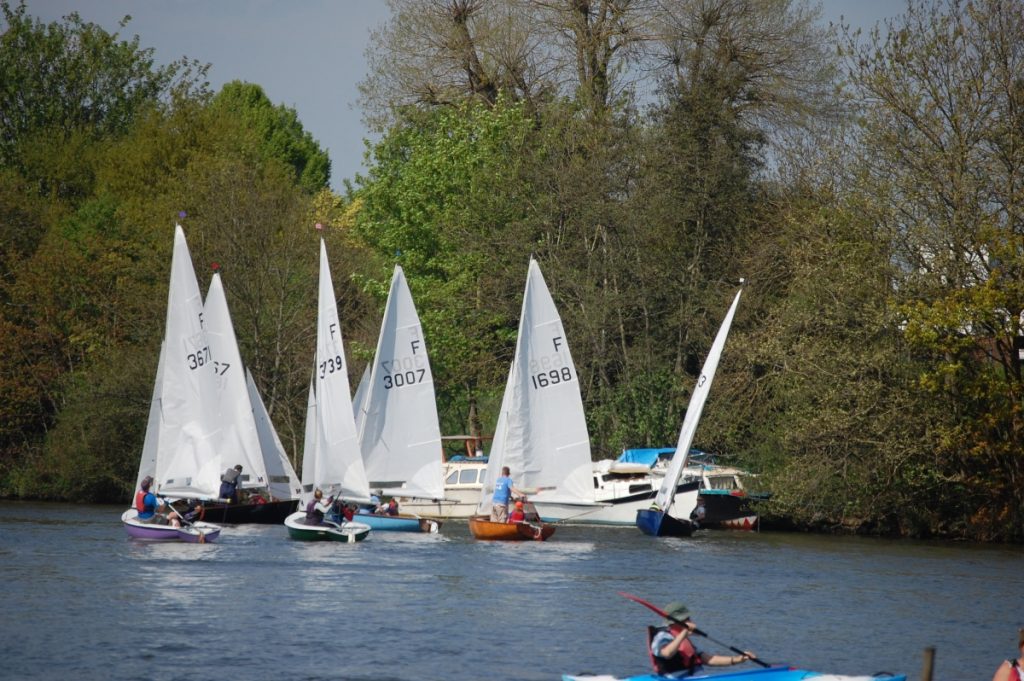 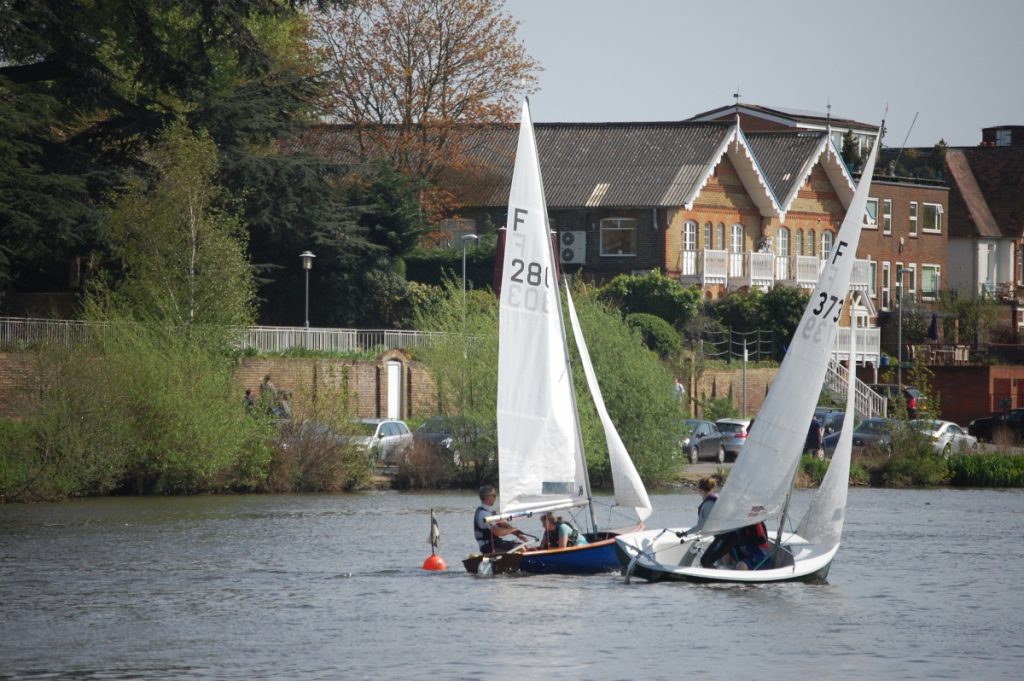 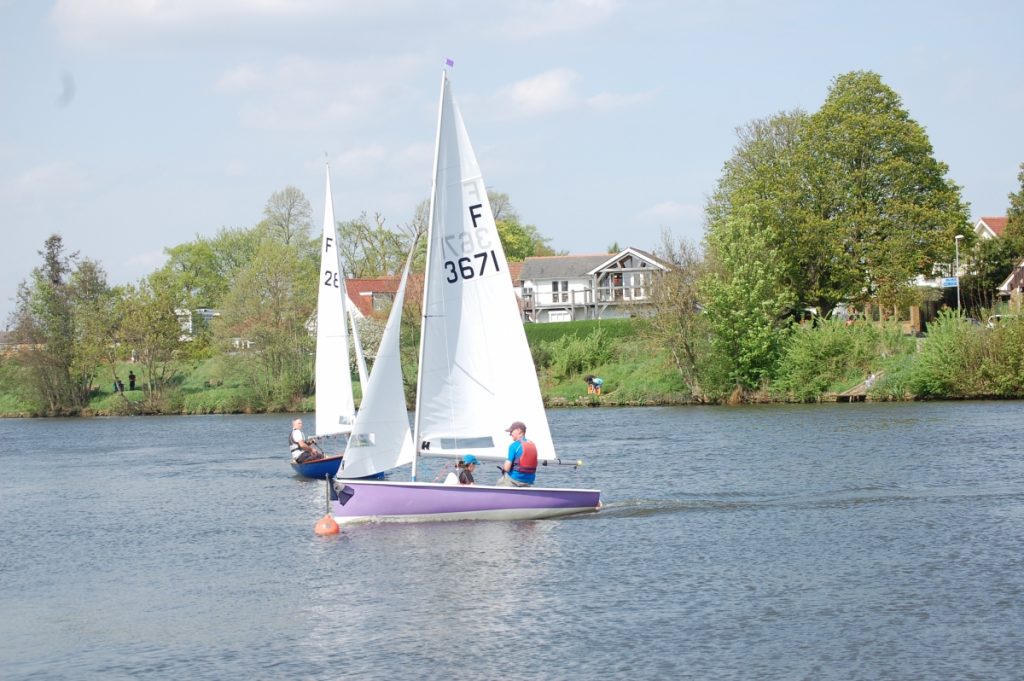 The box were kept busy doing the math and making sure that all the positions were correctly accounted for whilst the visitors and home crews alike disassembled Fireflies ready for the trip home and the younger members of the visitors and home teams had ice creams on the lawn and relaxed after a hectic but enjoyable day on the Thames.

In the end the first two positions were never in doubt, but third was closely fought. Having checked and done the discard / countbacks the following results were published and announced with suitable formality by Commodore Carolyne Vines and Vice Commodore Chris Pollard. 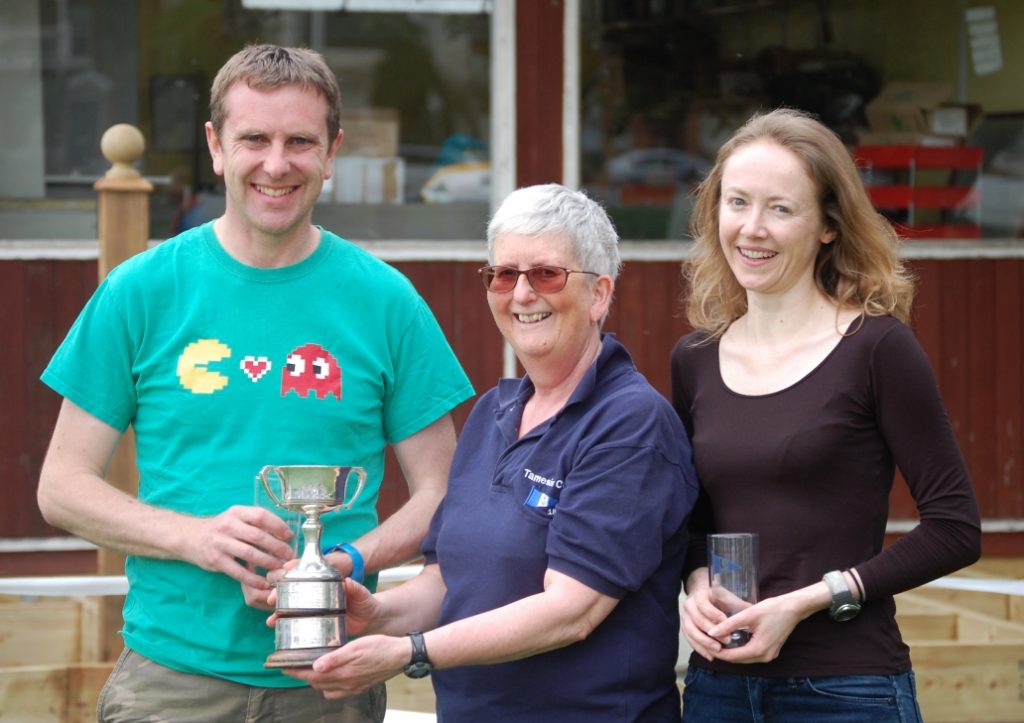 All in all, a fantastic day on the Thames at Tamesis Club with Nigel Wakefield and Emily Saunders well deserved winners of the Elizabeth Cup in Tip Top Too.

The participants and Firefly Class Captain would like to thank all those who helped organise, provide support and make the club a welcoming place to be. In particular we would like to thank Peter Johnson for being OOD, Chris Pollard for manning the race box (helped by Kaan Yargici), and Sean Roberts & Jim Hamilton providing safety boat cover for the duration of the open.

We all look forward to seeing you next year, and don’t forget, the next Firefly Open takes place on the 12th of May at Rickmansworth – if you can make it you are sure to have a wonderful time competing in this great class of dinghy.