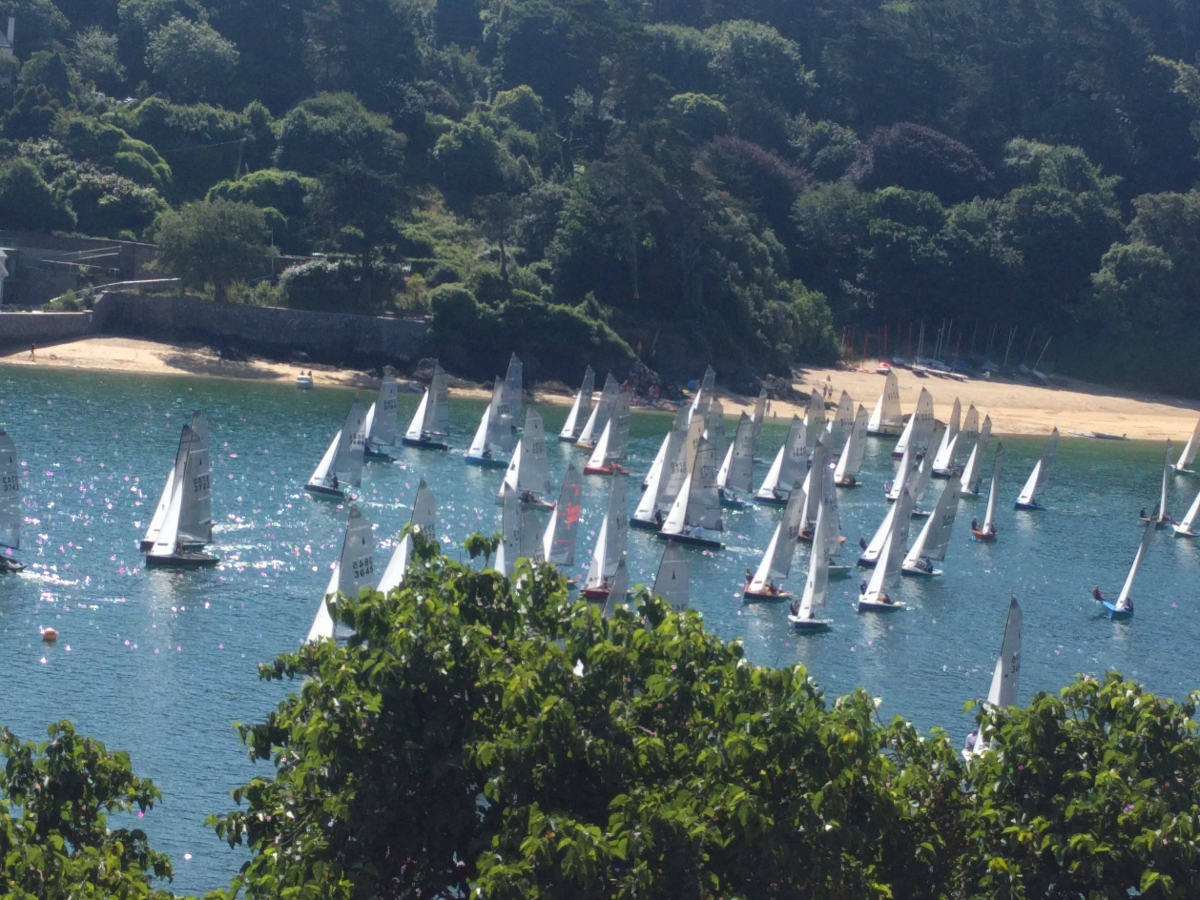 The week was hailed as the hottest in living memory, with lighter winds and glorious sunshine.  Everyone had a great time on and off the water – results below.
Final results: Friday 13th
Fran Gifford (crewing Tim Fells) 2, 5
Will Henderson 5, 7
Caroline Croft  3, 8
Joe McLaughlin, Sean Roberts 22, 34
Andrew Harris, Sarah Warren BFD, 43
David Croft 35, 67
Ken Duffell, Joe Woods BFD, 101
Andrew and Ken were black flagged at the start, so disqualified.

There was a nice breeze as well as sunshine and all Tammy boats in action yesterday morning.
Andrew was flying in around 5th place after a blast up to Gerston then again a flukey leg up to Saltstone, but disaster struck close to the finish. A gamble on the E Portlemouth/Salcombe side of the harbour entrance cost a few places as they were caught by light air, and after a successful gybe at the then windward mark Blackstone, in a gust they capsized to windward on the run. They could have recovered quickly from this but a following boat in ‘out of control’ mode took the rudder clean off Fifty Shades, sent it flying through the air nearly decapitating Andy Harris who was in the water. After that recovery took a while.
A great most of race, a galling result at the finish, but luckily and thankfully no injuries.
Joe McLaughlin’s result was a bit disappointing but it was the first time he had done a blast up to Gerston for 10 years! Next time it will be different.
Results-
Caroline Croft 8
Will Henderson 16
Joe McLaughlin  33
Dave Croft 20
Ken Duffell 42
Andy Harris 47
Start of the first race was in a light northerly. Wind reversed to a southerly sea breeze in the course of the race. Better wind this afternoon. Scorching weather. Best ever at Salcombe. Everyone having a great time.
Fabulous weather and a bit more wind this afternoon as the sea breeze really kicked in.
Btw Mick the Fish entertainment tonight was excellent and it’s only Monday but the bar diving tradition had already been re-established.
Words and photos by Stewart Colley
Tamesis boat positions:
Day 1
AM Race 47th – Take it Easy – Ken Duffell and Joe Woods
PM Race 14th  – Sublime – Joe McLaughlin and Sean Roberts
PM Race 21st –  50 Shades – Andrew Harris and Sarah Warren
Day 2
AM Race – 12th Joe McLaughlin and Sean Roberts
AM Race – 7th Andy Harris and Sarah Warren
PM race – 47th Ken Duffell and Joe Woods
ex Tamesis members’ positions:
Day 1

AM Race  6th –The Oldie – Caroline Croft and Matt Lulham-Robinson

Thanks to Jim Green for this reminder of why the Merlins are in Salocmbe this week:

“After the introduction of the Merlin in 1948 and the subsequent establishment of the merged National Merlin Rocket class in 1951 the fleet expanded rapidly and many travelled down to Salcombe to compete in its annual town regatta.  Soon there were enough Merlin Rockets competing that in 1958 they were offered their own start at the Salcombe town regatta, the first of which was won by top Tamesis sailor Brian Saffrey-Cooper who then went on to represent GB in the 1964 Olympics in Tokyo.  Eventually so many Merlin Rockets competed at Salcombe that they were allocated their own exclusive Merlin Rocket Week which is now one of the most popular dinghy racing events in the UK.  Over the years Salcombe’s Merlin Rocket Week has attracted many Tamesis members who have competed very successfully, particularly our own John Harris who has won the week no less than 6 times, a record beaten by only one other top Merlin Rocket sailor.

Nowadays, the event is limited to 120 competing boats which is greatly oversubscribed within the first few minutes of the entries opening and there is always a long waiting list, so the entries are split into four flights because Salcombe’s Harbourmaster sets a limit of 60 boats on the very congested start line.  Each of the four flights compete against each other three times during the racing week and the spectacle of 60 Merlin Rockets jostling for position on the start line is one of the highlights of the week for the hundreds of spectators.  For a sailing enthusiast, it’s a sight not to be missed! “