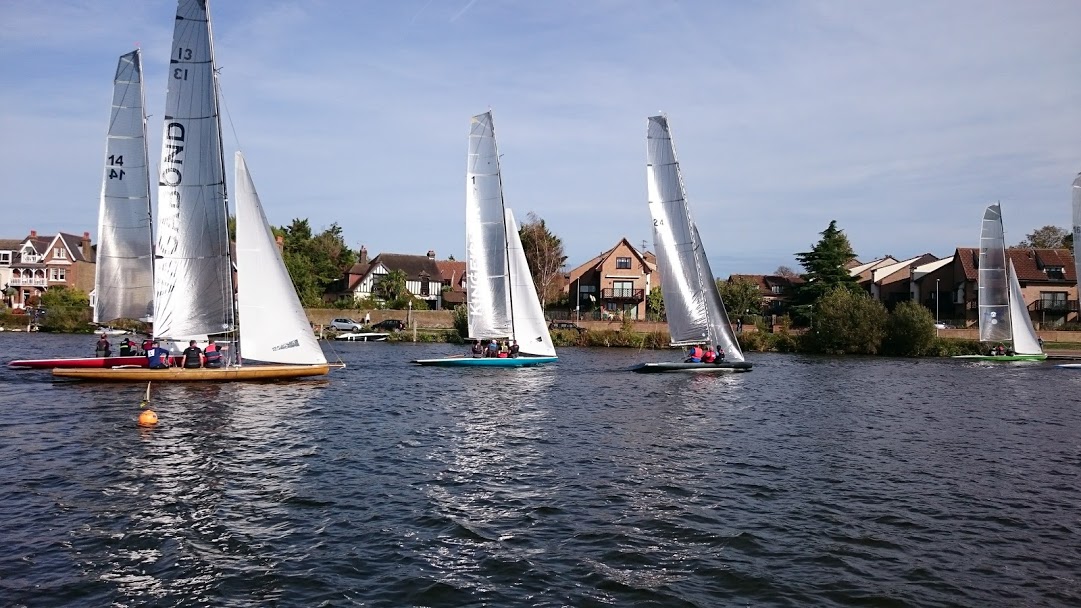 We were very pleased to see the six Thames A Raters arrive on Saturday along with blazing sunshine and a strong Southerly gusting 30 knots at times.  The course was challenging – upstream start taking the boats half way up the Canbury reach and down to the bottom mark below Trowlock Island.

All six started in the first race on Saturday, but three retired, due to gear failure or concerns re gear failure.  Osprey won from Adventurer setting up the needle match that lasted all the weekend.

The second race was for the Yates Cup.  Adventurer was clear winner from Osprey.  The wind had not abated, so it made for some very exciting sailing.

Sunday was completely different, pouring rain with a lightish northerly.   The course for the first two races took competitors up past the island then down to a mark just below the club.  Vagabond was clear winner in the first race followed by  Adventurer and Osprey. The rain got worse in the second race causing the wind to drop.  Adventurer led over the finishing line having overtaken Osprey during the second round.  Vagabond was third.

The third race was crucial.  Adventurer had two firsts and two seconds, Osprey a first, two seconds and a win, Vagabond a first, third and a retirement.  Vagaond easily won the last race though Adventurer was apparently closing some of the time. Osprey was third.