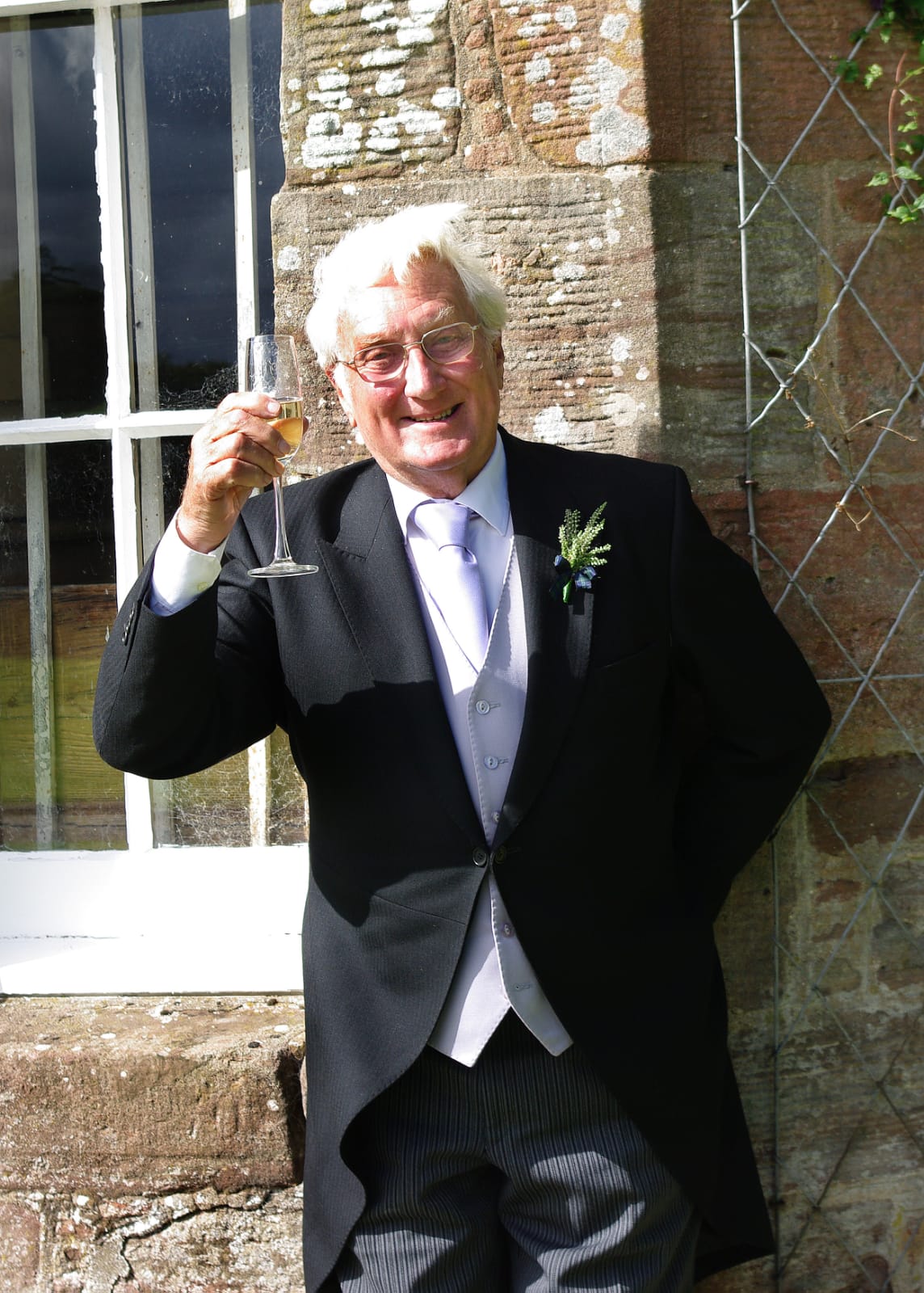 Brian’s funeral took place on Friday 1st February 2019.  Joan and the family arranged a magnificent send off in which we learnt a lot more about this truly remarkable man.  The following are the eulogies and photos from the funeral, together with some other material.

Brian was a very gifted chap and, as a young man, to use an old fashioned word, rather dashing. He excelled at just about everything he tried, be it sailing, administration, writing poems, telling stories, reciting amusing monologues from his great repertoire or business.

He wore these successes very lightly. He was as far from being boastful as it was possible to be, if he spoke of any of his trophies, visiting far flung places or meeting famous people, it was, usually, to tell an amusing and, often, slightly risque anecdote.

His first love was sailing or, rather, racing. His life revolved around the sport and the Stock Exchange and he excelled in both arenas. He honed his sailing skills at Tamesis Club, on the Thames, sailing, mostly, National 12s.

However, his first major success came in a Firefly dinghy. He had gone with a friend to the Championships but on the day of the big Firefly race for the Sir Ralph Gore Cup his friend couldn’t sail, so Brian helmed and…….won. Moreover those were the days when Championship races had 200 or more starters.

On the river in his National Twelve he was, most of the time, unbeatable, at Tamesis and other Thames clubs up to and including Henley. He had an uncanny knack of knowing where the new breeze was going to come from and, then, getting to it before anybody else.

He was fourth at the National Twelve Championships in 1952 and 2nd , 6th and 4th in ’54, ’55 and ’56. In ’56 winning the City of Weymouth Trophy. These years overlapped with his burgeoning career in Merlin Rockets.

Brian believed that all helmsmen have a Golden period and that although he raced successfully all his life, he was no different. His spanned 12 years, from 1952 to 1964, mainly at the Merlin Championships. At the Merlins he had ten results in the top four over an eleven year spell ; one second, three thirds, three fourths, and won the Championships three times. The one year he missed was 1958 when National Service caught up with him.

In 1959, when he had his first Championship win he was doing his National Service in Germany. He got a weeks leave, popped over to Whitstable, met up with Adrian, won the title and popped back to Germany again.

In 1961, back from Germany, he won the Merlins Silver Tiller – a travellers trophy, given for maximum open meeting points across the country on river, lake and sea.

He and Joan  acquired a second home in Hamble, which they had for many years, and, during that time they campaigned, mainly, in an X-Boat out of the Royal Southern Yacht Club.

Later, he returned to club racing at Tamesis in, of course, Merlins.  Getting a regular crew could be difficult, so he changed boats and spent many, many happy Sunday mornings sailing his single handed Laser. Still managing  to spot the new breeze and get to it first.

When, more recently, doing his duty as Officer of the Day he would take great delight in gathering up all the clubs racing marks and setting fiendishly complex courses. As he drew the course on the blackboard, a mass of criss crossing lines, he would chuckle and say “ That’ll give them something to think about !”

He was a year ahead of me doing National Service, he in the RAF, me in the Royal Engineers. We were both in our early twenties after long deferments for studying,  but our paths crossed, somewhat unexpectedly, when we were both posted to HQ BAOR, Rheindahlen – a purpose built garrison town in a pine forest near Dusseldorf. The military had a rare success with Brians posting, they slotted a very round peg into a very round hole and….. put him in charge of the money ! He was in charge of the local RAF finances and organised officers  expenses but, best of all, he was in charge of subsidised Petrol Coupons. They were each valid for a gallon and cost one and fourpence.  Possession of them, if you had a car, gave you the freedom of the autobahns……. It paid to be his friend.

He always talked of revisiting HQ BAOR but never did. Probably just as well, according to Google Earth it is now derelict and the pine forest has taken over.

While in Germany he sailed Piraten at a club on the Baldenesee, near Essen. He took me up there and the members treated him like royalty – I just assumed this was because he won all their Trophies. It was many years later that I found out the real reason.

After the war ended, in 1945,  all German clubs and boats were requisitioned and for use only by forces personnel. In 1958, 13 years after the end of the war, this situation seemed, to Brian, to be unjust and unfair to the members. So he lobbied the top brass and, lo and behold, the members  got their club and boats back…… Hence his popularity.

He took Joan there, in the early seventies, and the members remembered him well, loaning them a boat for the weeks regatta and, guess what…..he won. The paparazzi (or the German equivalent) followed the racing in motor boats and the result went down in West German newsprint history !

Brian was a member of Tamesis for 73 years, literally man and boy,  and he was Treasurer for 25 of those years, overseeing and organising the finance for many lasting developments that shape the present club premises.

When the club changed its structure and constitution more recently and needed to appoint trustees, the natural choice for one of them was, of course, Brian.

He put an enormous amount back into his sport. He served on the RYA Council, was Vice chairman, Chairman and, naturally, Treasurer.

He served on the Appeals, Dinghy and Finance Committees. He was made an Hon Member in 1980 and, from 2004, he was a Corresponding Member of the Council,

He then served on the Council of the IYRU, latterly known as ISAF and, now, World Sailing. He was a very conscientious and effective Treasurer of that organisation and was rewarded with a Gold Medal for long service.

He was a director of the World Youth Sailing Trust from 1998 until last year.

He attended meetings on Britannia, at Cowes, with Princess Anne and had numerous chats with her Mum and Dad.

What a CV ! How on earth did he fit it all in ?…….but fit it in he did, with great panache and humility.

He travelled far and wide with Joan on ISAF business and presented Ben Ainslie with his Gold Medal at the Sydney Olympics. Brian was selected once for Olympic trials but the wretched Accountants where he was working refused to give him the time off !………Must be one of the biggest “If onlys” or “What ifs ?” ever.

This has been a very brief glimpse into a long and fascinating life wrapped up in the world of sailing.

Brian, you were a great bloke – you are sorely missed but you leave so many memories.