Chris Pollard hosted a very successful Vice Commodore’s Dinner on the evening of 16th February.  We were treated to an excellent meal which was followed by some very amusing speeches.

Chris made a one off presentation to Alan Green of ‘The Mark of Appreciation’ in recognition of his moving of the distance mark several yards upstream. Pictured below 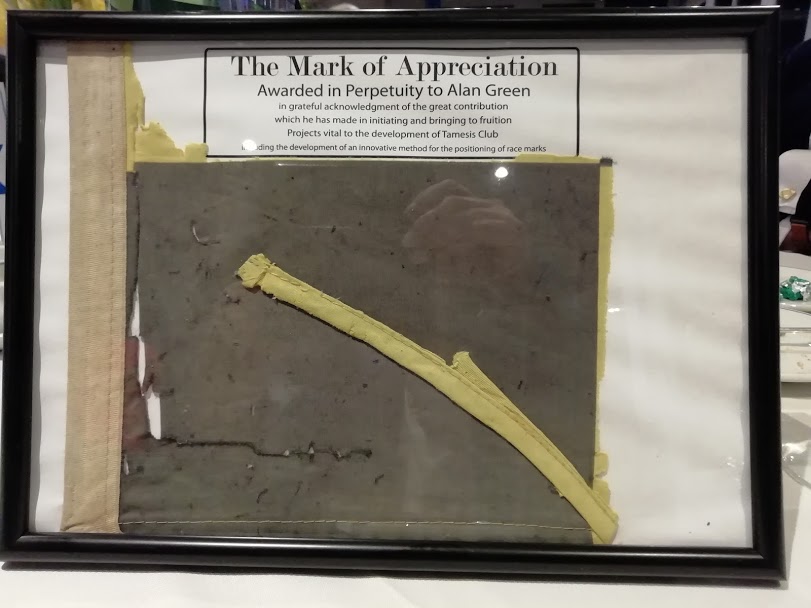 Ian Ramage, last year’s recipient of the Uffa Spoon, then regaled us with several amusing stories detailing incidents that happened during the year.  As the Oscar season is upon us he cleverly named each after a well known film.  He finally opened the ‘envelope’ to reveal Alan Green as the winner of the Best Mess up of the Year – moving the Distance Mark way above its normal station.  Alan replied with several definitions of dredging, which included the deliberate dragging of an anchor – this time attached to the Distance Mark – which he had done under sail when single-handing the club Wayfarer.

Thanks go to Nicky Johnson for overseeing the catering, Jo Carstens and her crew for cooking and serving in the bar, the helpers who laid the tables in the morning, and finally Chris Pollard for hosting such an excellent evening, and designing the poster and menu cards.