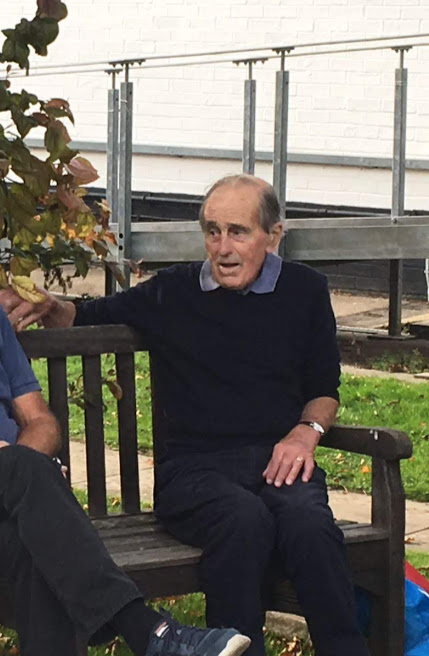 It is with great sadness we have to announce the death of Peter Simpson on Saturday 23rd March in Kingston Hospital after a short illness.

Peter Simpson’s funeral will be at Mortlake Crematorium on Tuesday 9th April at 2.40 pm, followed by refreshments at Tamesis. All members would be most welcome. If possible, to help with catering arrangements, please could you email jenniferm.adams@btopenworld.com if you plan to attend? Thank you.

Peter was a complete stalwart, a totally practical man with a great sense of humour and zest for life.

Peter was a long time member of Tamesis.  During this time he was Rear Commodore Sailing, Vice Commodore, Commodore, Boatswain and ran the Cadet section to name but a few of his roles.

He successfully introduced his children and grandchildren to sailing.

He was nominated for and awarded an RYA Community Service Award for his services to the club and to sailing.

He and Phil England started the Wednesday Working Party which is now a vital institution.

He sailed merlins and also National 18′, together with many stints of crewing offshore. For many years he competed at Salcombe Merlin Week in his boat Pandemonium.

He was one of the original volunteers helping to restore the Kempton triple expansion steam engine, and organised several visits for Tamesis members.

He had an enormous fund of slightly risque jokes.  Many will remember the brocholli joke.

Our thoughts go to his family at this time.

I am sure there is more, so any additions are welcome.

Jim and I would like to share some of our fond memories of Peter. We all met through sailing at Tamesis Club and have known each other for over 30 years.

Peter and Phil England founded the Tamesis Wednesday working party when they retired and other members joined as they also retired. Peter was renowned for his repertoire of slightly risque jokes which we encouraged him to tell at the working party’s Christmas lunch. This last Christmas lunch Peter was unfortunately in hospital for a few days so in Peter’s absence Jim retold 3 of the favourite jokes. Jim owned up to this afterwards when we were both at Peter’s bedside whilst he was dozing. Peter was immediately wide awake and as bright as a button said ‘those jokes are copyright you know’! Typical Peter.

I also remember Peter very fondly not only as great friend but also as an expert teller of jokes and funny stories, very often at his own expense.  For example, he told us that one time he with his crew Ingrid towed their boat up to the reservoir at Carsington for Merlin Rocket race training and when it was over they headed back to Tamesis Club.  After a few miles Ingrid said to Peter “Haven’t we forgotten something?”.  “I don’t think so” said Peter very confidently.  “We’ve forgotten the boat”, shouted Ingrid!

In addition to Tamesis Club, another of Peter’s great loves was Salcombe where every July we all went for a week to race our Merlin Rocket dinghies.  Peter raced right up to the age of 75 but after he stopped sailing he greatly enjoyed being our Salcombe ferryman and enthusiastic supporter.  For many years we, with our spouses and Peter, rented a cottage that had wonderful views of Salcombe harbour and Peter was particularly amused that the owner always very proudly told her friends and neighbours that she had the ‘Three Commodores’ staying in her holiday cottage.

David mentioned the Tamesis Wednesday Working Party Christmas lunch where Peter always told a few ripe jokes which usually culminated in his famous joke concerning a shortage of  Broccoli.  We became so familiar with it that sometimes when he became slightly mixed up when telling the joke we could all finish it for him to great laughter and cheers from everyone.

Peter did a tremendous amount for Tamesis Club, particularly during his time as Commodore, then as Bosun and Cadet trainer. To name a few:-

Peter and I shared a love of cask beer, or ‘real ale’, and we frequently had a chat over a pint at the Club bar. We did so just a day before his last illness and that will always be a special memory for me.

David and I have a host of wonderfully happy memories of Peter.

It was both a privilege and a joy to have known our good friend Peter and we miss him very much.