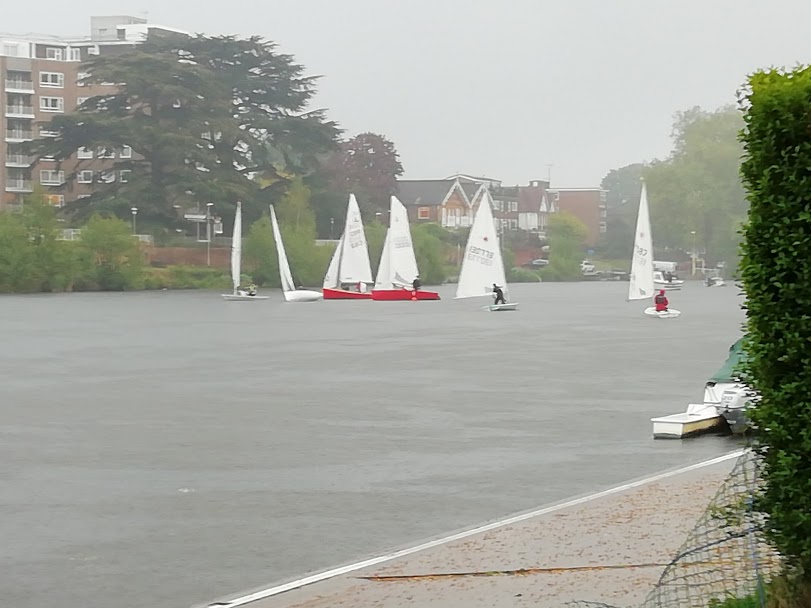 The 2019 Thursday evening series has started, with a decent turnout of 10 boats, including representatives from 6 different classes. The weather was fairly typical of a Thursday with a light wind becoming lighter as the evening wore on but with a spectacular sky after the afternoon’s rain to provide some distraction as we drifted around seeking the errant puffs of wind.

Charlie Morgan, crewed by John Adams made a good start and was not headed for the whole race.  The Tanners in their RS400 went well in the light wind but were amongst a number who decided to retire before navigation lights were needed.  In the end Jon Redding in a Laser followed Charlie and John with Ken Duffel and Mattie Valentine taking third and Charles Fox and crew in his N18 Genevieve fourth.

The evening was well rounded of with a tasty supper from the catering crew.

The evening of Thursday 9th May probably provided the least pleasant sailing conditions, wet, very wet at times, with little or no wind, although the sun did shine gloriously golden for a couple of minutes before the finish.  Carolyne’s pictures tell the story.

Nonetheless six boats took to the water to brave the elements.  The start was interesting with so many boats over the line the OOD assumed that start was upstream rather than a normal K course start downstream.  Once started, racing was relatively close for the first couple of laps with a Merlin, Albacore, Laser and a Firefly attempting to round Canbury for the first time simultaneously.  However as the race slowly progressed the Adams found a few extra puffs and managed to finish ahead before those puffs disappeared, leaving their opponents to drift in a few minutes later.  David Baker crewed by Sally Redhead in Cobblers were second on the water but could not save their time on Stewart Colley’s Laser as he finished third on the water and second on handicap.  Jim Hamilton in his Firefly was the 4th finisher with Graham King and Charles Taggart deciding that a warm shower was more tempting than the hyperthermia they would suffer by staying in the cold and wet to finish.

Warm and snug in the bar on the outside of a tasty supper, we put the cold and wet of the race behind us and look forward to the next episode in the Saga of early summer Thursday evening sailing.