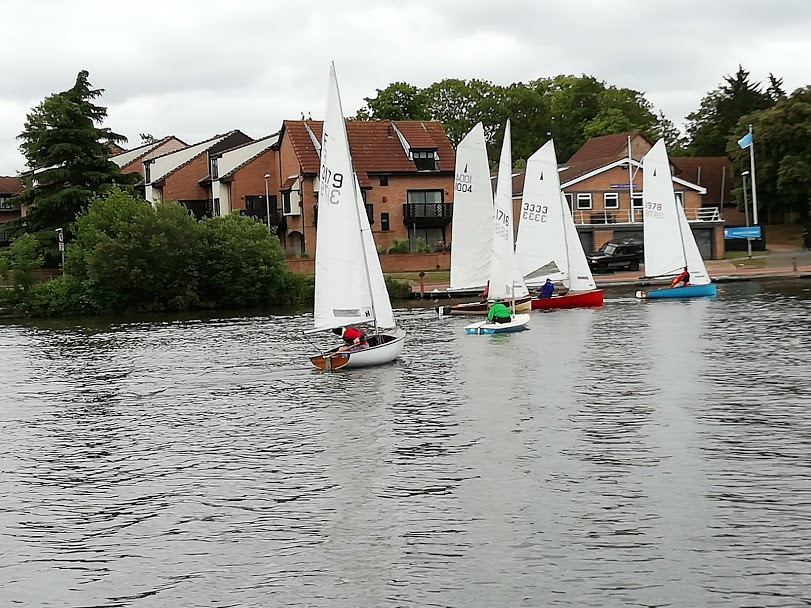 If anything the west south westerly wind on the 7th race in the Saga series on 13th June was the best of the season so far, keeping  a reasonable strength, albeit with a few holes and shifts, for the whole of the race.

Compared to the previous week when 16 boats came to the starting line this week was relatively quiet with 8 boats competing, consisting of 3 Merlins, 3 Lasers a Firefly and  N18.

Charlie Morgan crewed by new member Humphrey Dorrell led around the first mark and extended their lead to win by just 4 minutes on the water and also on handicap.  Behind him the Merlins of Ken Duffell and Mattie Valentine  had a close battle with John and Zoe Adams in their Merlin with the Adams’s just creeping ahead to take second on the water.  Behind the battling Merlins Charles Fox and Robert Blakebrough in the National 18 steadily crept up on the pair and although behind them both on the water managed to take second on handicap.

Charlie’s win now means that he counts 4 first places in the overall results and hence cannot be caught.  He leads with 4, with the Adams 2nd on 9, Ken 3rd on 15, David Baker 4th on 18, Stewart Colley 5th on 21 closely followed by Graham King on 22, then Charles Fox  in 7th on 24 and Chris Taggart on 27.

The catering crew served up a tasty chicken dish to round off a good evening.

There are still 2 more races to go and the over all results behind Charlie are still capable of change s a good reason to come out and start the weekend with a good sail and a sociable evening.