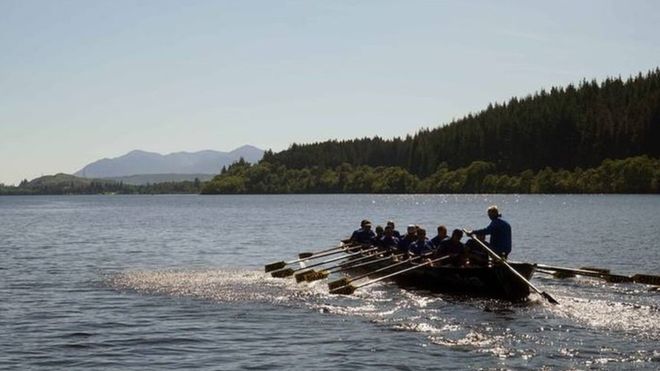 Long term Tamesis member Jock Wishart has set yet another record.  The boat has been stored at Tamesis over the last couple of months and the crew are often seen out training – picture above.

Video of the attempt    https://youtu.be/a-DwjhUiyMk

The following has been cribbed from the BBC report

It beat the previous time set 26 years ago by former world rowing champion Peter Haining and George Parsonage by one minute and 12 seconds.

The row on Wednesday started from Dores and finished at Fort Augustus.

The team completed their challenge in a Trainera, a type of boat used in the coastal waters of the Bay of Biscay in the Basque region of Spain.

Mr Wishart said: “I am absolutely delighted to have broken this record which stood for such a long time.

“The crew were terrific. They used their power and stamina to achieve this and I suspect their new record could stand for some time.”

He said the team had hoped to benefit from a tailwind, but this only materialised halfway through the challenge.