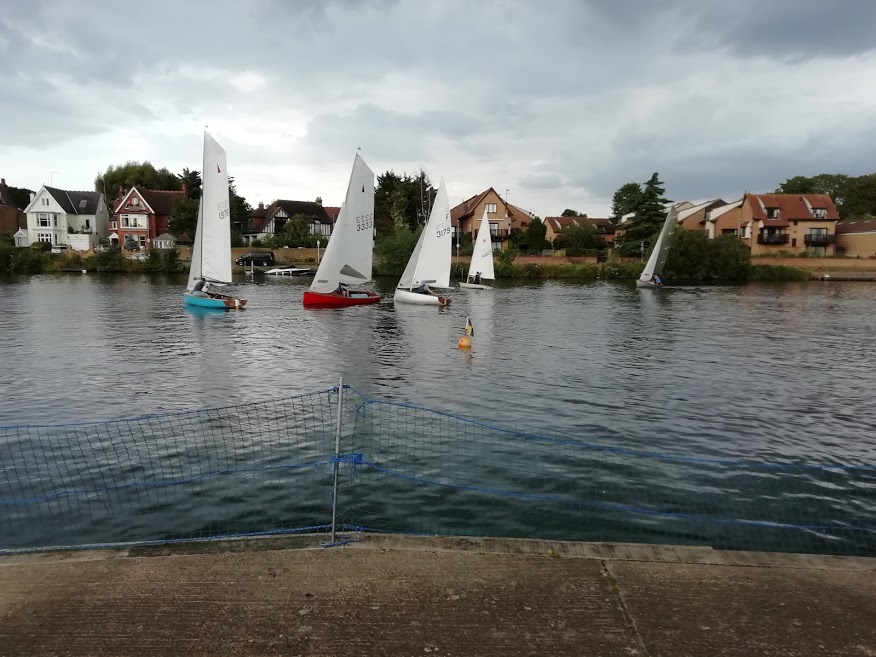 The first of the August set of GW Smith Trophy races, and the fifth in the series, was run in a light to very light wind which started off up the river from the north-north-west and gradually backing to a more westerly direction.  Although the river was glassy before the start we did manage a lap or so with a discernible breeze which then died before picking again just before the finish.

Nine boats came to the start line, with two crewless Merlins, Charlie Morgan  in Lady Anne and John Adams in Saltarello taking an early lead.  Charlie led for the first lap, John Adams took a flyer on the run down the Middlesex bank to take the lead at the end of the second run, but lost his way on the beat allowing both Charlie and Charles Fox crewed by Alden Horwitz in the N18 Genevieve through.  Charles eventually also overtook Charlie to win the race both on the water and on handicap.

Behind these three was a battle between the third Merlin, Shoestring, sailed by Peter Johnson and Paul Jamieson, the two Lasers of Peter Impey and Ellen Schwarz and the second N18 sailed by Alan Green and George Barber, with the Merlin finishing fourth on handicap the N18 fifth and the Lasers sixth and seventh.  The two Fireflies decided they preferred the idea of  warm bar rather than chasing elusive wind puffs on the river and retired.

Two boats have now qualified for the GW Smith Trophy, Charles Fox in his N18 and Charlie Morgan in his Merlin.  Of these Charles leads Charlie by 12 points to 21, but there are still a number of races to go and plenty of potential qualifiers.

The catering crew were busy on Thursday, serving supper not only for the Thursday evening racers but also those attending the popular Summer Camp, which led to a very pleasant end to the evening.