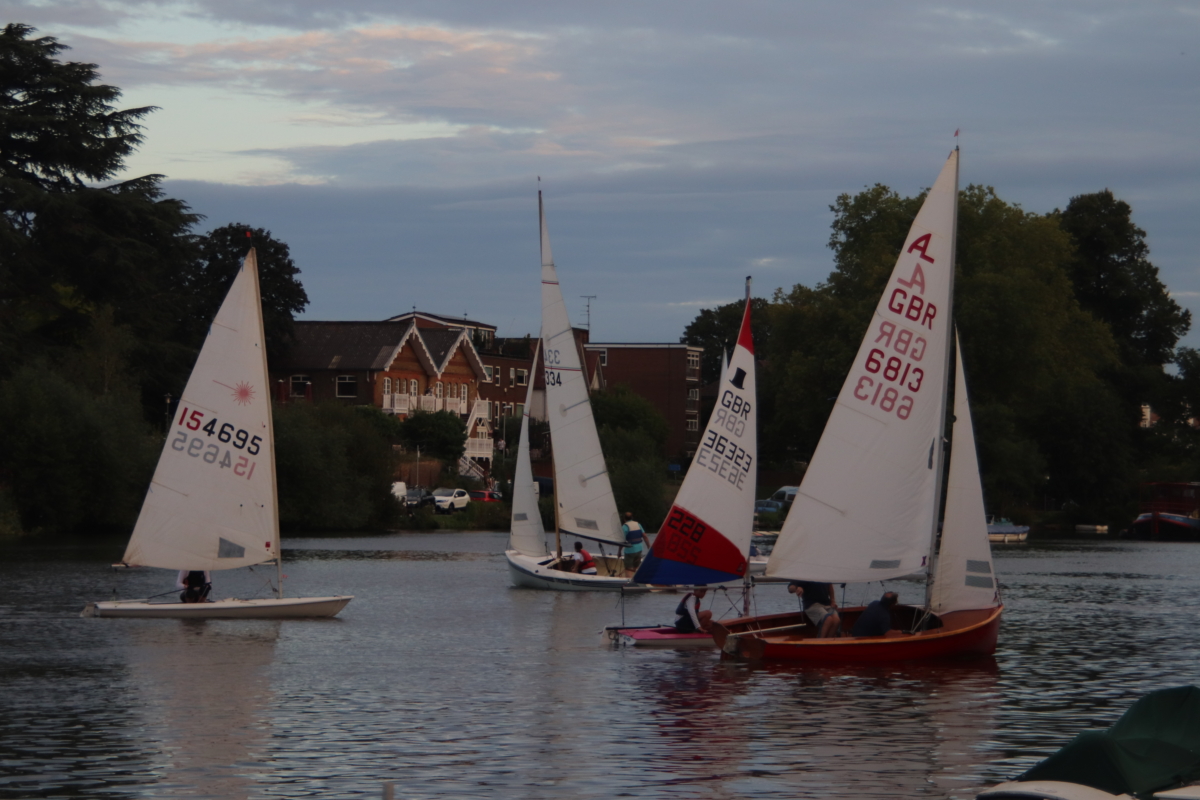 The weather did not look promising as the competitors gathered on Thursday evening with a glassy windless Thames.  However as start time approached a few sails lazily flapped, and the glassy water started to show an increasing number of cats paws as a light wind slowly began to fill in from the south.  In the end that light wind provided a good beat up stream and a run downstream, and although streaky, enabled five laps to be sailed by most of the thirteen entrants.

Charlie Morgan in his Merlin Lady Anne, crewed this week by Humphrey Dorrell took an early lead but he was soon to be overtaken by Tim and Ed Medcalf in their Merlin Samanda who sailed off into a healthy lead that he held to the end.  The battle behind him was close with John and Zoë Adams in the third Merlin, Saltarello, snapping at Charlie’s heels and eventually overtaking him to take second place with Chris Pollard and Caroline Stilwell in the N18 Antedote powering through in the last few yards of the race to take third.

On handicap it was a good night for the Merlins with Tim and Ed winning, John and Zoë second and Charlie and Humphrey fourth behind Chris Pollard and Caroline Stilwell in the leading N18.

The fleet was mixed with an Enterprise showing for the first time in the series as well as an Albacore, a second N18, a Firefly and a couple of Lasers and two juniors in Toppers, Alden Horwitz and Henry Medcalf.

Over all the race provided a few more qualifying for the series and the results at the moment are:
While Tim and Ed are clear leaders at the moment, the battle for the next 3 places is very close and will probably only decided on the last race.  However with 3 more races to go, there are still a number of other boats who could qualify and completely change the results.
So lets have a bumper turnout for the last few evening races of 2019 and for the suppers that the catering crew provide for us.
John Adams