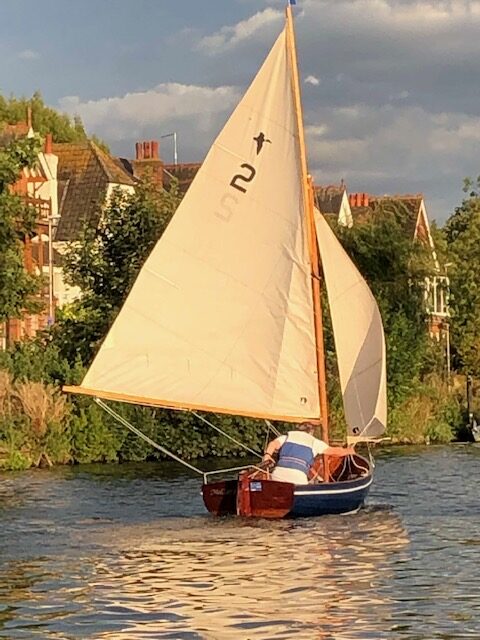 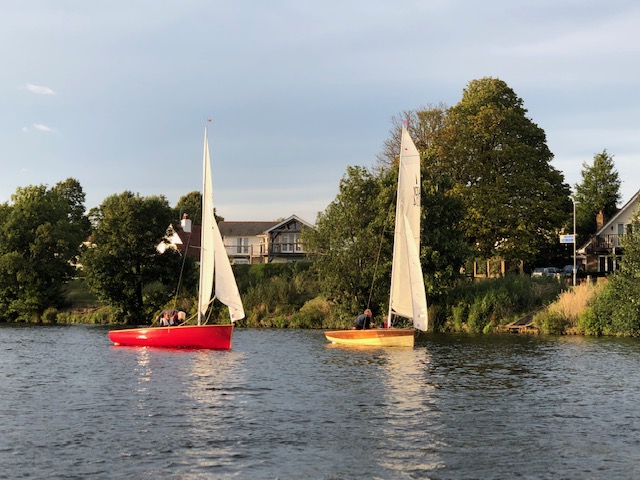 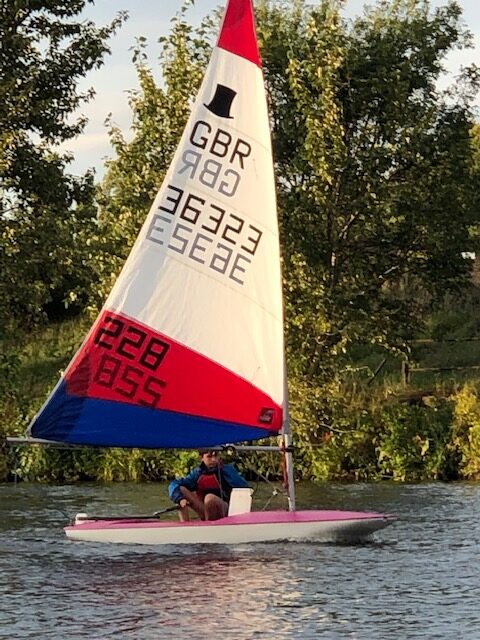 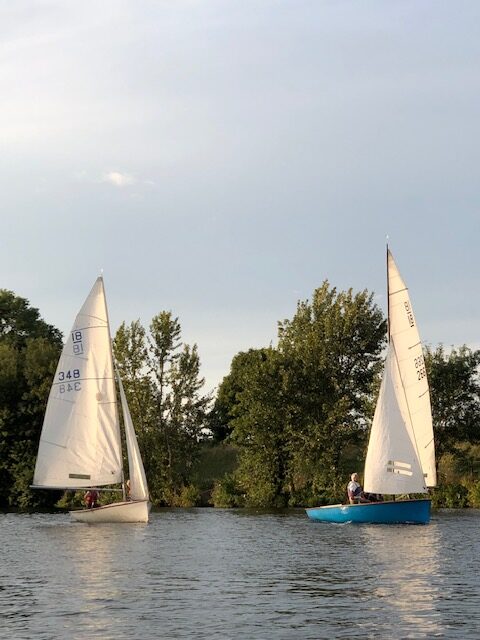 Thursday evening started well with a brisk wind blowing up the river from the north north west, making the OOD’s choice of course very easy, a simple sausage of a beat downstream to Lensbury and a run up to Canbury.

True to Tamesis form once the course had been laid and the time of the start approached the wind started to shift to west, bringing the prospect of the need for a dog leg.  Happily there was not time to change and wind shifted northwards to give a reasonable beat and run/broad reach and although the wind fell throughout the evening it still it was enough for a good sail for all.

Twelve boats came to start line including Henry Medcalf in the Topper and Mark Gardner in his elegant Mallard (picture above).  Ken Duffell crewed by his grandson Matt Valentine in the Merlin Avenger took the lead for a couple of laps before exploring the shore a little too closely, letting David Baker and Jim Green and the Albacore through to lead.  However Tim Medcalf crewed by his son Ed in Merlin Samanda decided to inspect his rudder as a possible reason for not being in his recently accustomed position at the head of the fleet, removed a good sized clump of weed and accelerated through the fleet to finish first on the water.

On handicap matters changed and David and Jim came first in the Albacore, Charles Fox and Robert Blakebrough in the N18 Genevieve taking second and adding a good second to improve his overall placing in the series and Stewart Colley in his Laser taking the final podium place. It was not a good day for the Merlins on handicap with Tim falling to sixth and the others further down the fleet.

Overall there have been some changes with an additional 5 boats qualifying.  Tim and Ed still lead but Charles Fox’s second allowed him to start discarding poorer results and he lies just 2 points behind Tim, with 2 races to go.  David Baker is also not far away and with a couple of wins in the last two races could steal the series.  So as the end of the season sadly approaches the next two races will be crucial in decided in the winner of the 2019 GW Smith Trophy. So come and be part of the close racing, or to enjoy the spectacle, the food and company that gives the Thursday evening sailing its special attraction.

John Adams
Thanks go to John and Zoe in the box, and David Jones and John Pearce in the Patrol boat.

Thanks to David Jones for the lovely photos