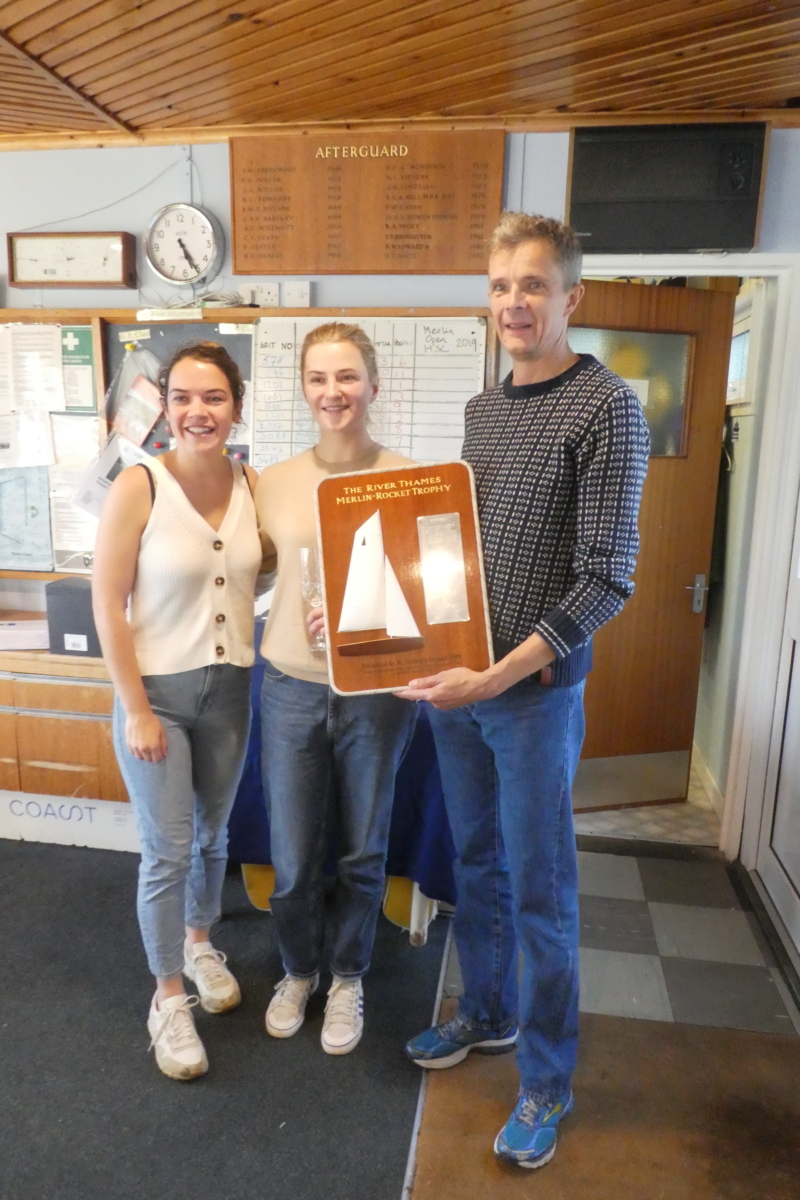 The weekend of 12 and 13 October saw Merlin Rocket 596 ‘Samanda’ compete at the DeMay and Open/Thames Series events at Hampton Sailing Club.
Saturday’s weather was almost windless with an accompaniment of rain of varying intensities from driving to simply irritating.  Three races were sailed with each a test of patience.  Happily, Tim and Valerie did enough to feature in the end of season DeMay prize giving by winning second place in the series, Valerie winning ‘best newcomer’, and many hours in the shed winning Samanda the Draycote Bowl for most original boat.
The following day’s weather featured strong winds gusting across the reach but, mercifully, a lot less rain.  Three races were again the order of the day which was just as well as, following some spinnaker-related excitement on the first downwind leg of the first race, Tim managed to steer the wrong course and so had to forfeit!  A lack of local knowledge and poor boat speed (partly due to collecting massive chunks of weed, due to sailing in parts of the rivers that the locals avoided) made the next two races a slog but at least the spinnaker technique improved.
Despite placing poorly in both races, Samanda had done enough earlier in the season to secure the rather impressive Merlin Rocket Thames Series trophy and some glass wear.  Valerie was also given a special prize for an outstanding performance in staying dry while saving the boat after a spinnaker fail-induced capsize – she was literally ‘out standing’ on the end of the centreboard and her quick thinking prevented a very soggy start to the day!
At this point, it is important to highlight the massive contribution to Samanda’s success made by Matty Key who crewed at the DeMay event at Goring SC and at the Tamesis Club Merlin Rocket Open.  Without his contribution on the water in terms of sailing skill, and his positive attitude in some tricky conditions, the boat would not have qualified for either series.
The experience of racing at ten events run by eight different clubs has been by turns exciting, frustrating but ultimately rewarding.  We have been soundly beaten at times, but also surprised ourselves on occasions by placing well enough to be in the prizes at the end of the season.  We have always enjoyed the host club’s consistently warm welcome and excellent catering – Ranelagh, Banbury, Goring and Twickenham being particular highlights in that regard!
Most of the trophies show a proud history of winners from Tamesis Club and it would be great to see more from the Merlin fleet getting on the road next year and continuing that track record – you will be well-received.